Honey is Sweet but... 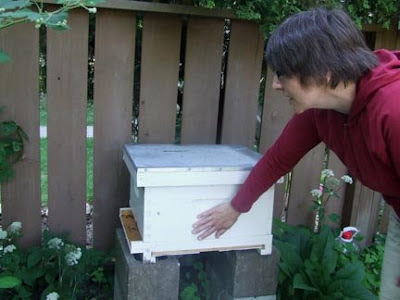 We have a new beehive in our neighborhood! It's kind of like being a new parent--exciting and scary. We sort of know what we're doing, but we're also winging it. I am a very pragmatic beekeeper. I think it's my dad's influence. I want to be quick, gentle, and efficient with no fooling about. That way the bees can get back to their work. I was told these bees were gentle, so we didn't smoke them. J and I are interested in being as non-invasive as possible. In hindsight, I think smoke would have helped "herd" these bees who really didn't want me to scrape off their beautiful burr comb. We are also going to try sugar water and thyme tea sprayed into the hive as recommended by a biodynamic beekeeper. 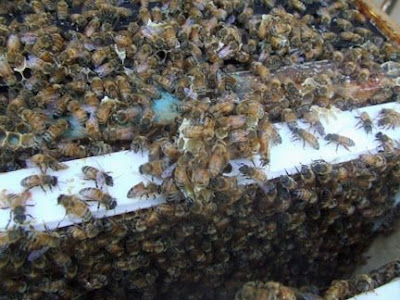 The bees were pretty happy, with some larva and some honey in the comb. They're just getting started, but they sure wanted to build natural comb rather than use Mr. Langstroth's clever calculation of bee space. They prefer life outside the frame. Rudolph Steiner would be proud of these bees! 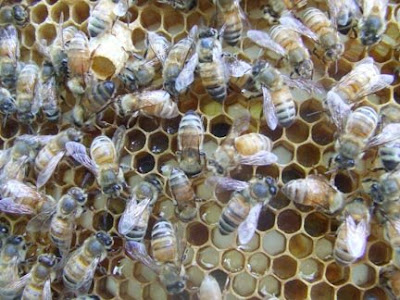 We were a bit concerned that they were building queen cells, but apparently they practice once in a while in the middle of the comb. We should scrape these off. 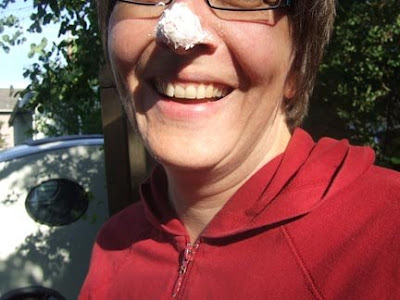 Since they had consumed the sugar water and begun to build comb in the feeder, we decided to take it out and let the bees rob it. I tried to fit another frame in the hive, but it just didn't fit. This is where I got frustrated and should have taken a time out. I made a quick movement and bam! Two stings on my left hand right through my garden gloves. One guard bee chased J accross the street and stung her on the nose. Honey is sweet, but the bee stings. Baking soda mixed with water soothed the pain a tiny bit. 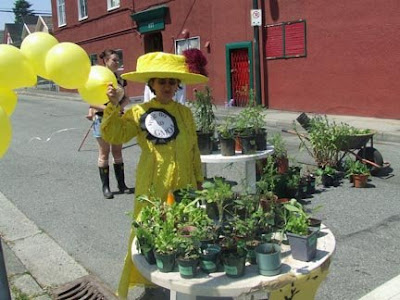 The next day we had a 2 Block Diet plant sale to raise money for our hive. I wore my new Madame Beespeaker outfit. 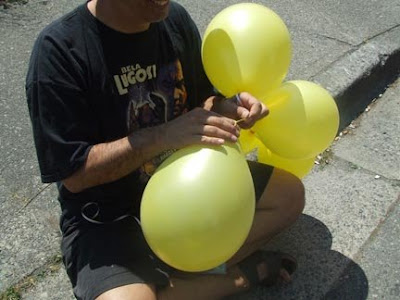 It was Car Free Day on Main Street, so we had fun people watching and telling interested folks what we were up to. 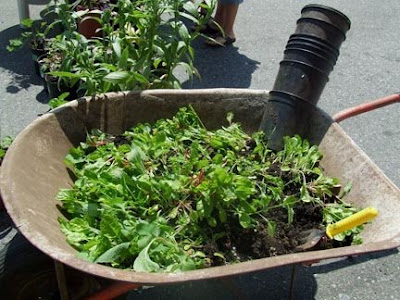 The wheelbarrow above was a station where you could pot up your own chard. I bought some lovely yellow pear tomato plants to put in my garden. I can't wait to eat these in a salad with some nice chevre. Thanks to everyone who donated plants! 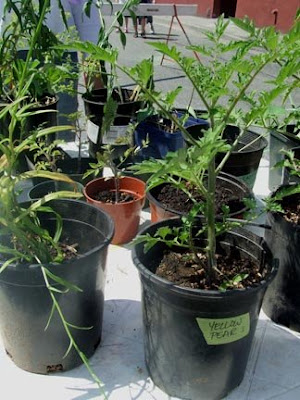 Posted by Beespeaker at 7:10 PM