Which are the Most Charismatic of the Minifauna? A Grade 5 Class Survey

Yesterday I worked with a grade five class and we surveyed everyone's favourite bee and favourite food. Here are the results.

The winner: Bumblebees come out on top: 10 people chose their beloved furry friends, and one voted specifically for a male bumblebee because they don't sting! There were some specific species of bumblebees that folks chose from the beautiful poster at their table: "The Bumblebees of the Western United States" (some of which are found in British Columbia). This educational poster was published by The Pollinator Partnership and I highly recommend it as a classroom resource illustrating bumblebee diversity.

There are also cuckoo bumblebees who look mimic true bumblebees, but they don't sting and they don't carry pollen. Just like the cuckoo bird, the mother lays her eggs in another nest and her babies freeload off of the food that was meant for the true bumblebees. Cuckoo bees are a sign of healthy biodiversity.

Second Place: Those adorable honeybees came second with a total of 7 votes, and once again someone voted for the male bees, the drones who cannot sting.

You don't see male honeybees on flowers because they hang around in different hives begging for honey. Drones are the only bees with a passport to visit as many hives as they like, but when fall comes around, some of them get evicted.

There are also flies which mimic honeybees and don't sting: They are called hoverflies or syrphid flies.

There are nine species of honeybees worldwide. Our European honeybees are called Apis melifera: melifera is Latin for honey-bearer, which is also the root of names like Melissa and Melaniea. Apis cerana is the honeybee used for apiculture in India.

Third Place: The green sweat bee (Agapostemon spp.): The folks sitting around the "Wild About Bees" poster published by Canadian Wildlife Federation were seduced by the beauty of the green sweat bee, in third place with 4 votes. what does the name Agapstemon is Greek: agape (love) and stemon (stamon) ie lover of stamens. What a great name for a bee! Did you know that sometimes wasps also come in beautiful metallic colours? Check out this Jewel Wasp I saw in the herb garden at the Moberly Community Centre and you'll see what I mean.

These are all solitary bees, meaning they don't have a queen or castes of worker bees. Some of solitary will live in groups (like a condo), but each female lays eggs in her own nest and provides them with nectar and pollen so they can grow into adult bees before they emerge. The trick is how do bees find their tunnel is a group of many? Mason beekeepers use colour patterns, or they toast the front of the mason bee condo to reveal the pattern in the wood which helps the bees orient themselves to their particular hole. Sometimes they get in the wrong nest and then the other female kicks them out.

meat: chicken, pork salami, ground beef or beef meatballs
wheat and other grains such as oats, quinoa, etc.: (wind pollinated)
potatoes: (self-pollianted, but tomato breeders need bumblebees to buzz pollinate the blossoms)
tomatoes and peppers: (buzz pollinted by bumblebees)
onions: (all kinds of bees)
herbs: (all kinds of bees) many herbs that add flavor to our foods and herbs are also good for the bees
examples:oregano, sage, rosemary
cheese and other dairy: (cows eat alfalfa which is pollinated by alfalfa leaf cutter bees)
mustard: (seeds are from yellow flowers are pollinated by bees) vinegar, oil
mayonnaise: (eggs, vinegar and oil)
eggs (chickens sometimes fed on alfalfa seed)
oils: olive, sunflower, and canola (sunflower and canola pollinated by teams of different bees)

Pizza was a definite winner, but this class certainly loves its healthy fruits and vegetables. It would be interesting to figure out how much of your daily diet is actually pollinated by bees. If one of every three mouthfuls is generally estimated to be pollinated by bees that's 33 per cent. It's going to be different for every person. It's almost easier to figure out what percentage of your diet is not pollinated by bees, i.e. whole grains. (By the way, these are still part of a healthy diet, even if they aren't pollinated by bees.) In the next two weeks the class will be researching how their favorite foods are pollinated, blossom morphology and studying bees by drawing and making cartoon bee characters.

Madame Beespeaker's Challenge: Try tracking your food for one day and estimating what is and isn't pollinated by bees.

Here are some online resources that we explored in the classroom using the Smart Board.

A Pictorial Guide to Bees of the Humboldt Bay Dunes by Susan E. Nyoka


Bee Basics: An Introduction to OurNative Bees by Beatriz Moissette and Stephen Buchmann,

The Social Lives of Bees from Beespotter

Posted by Beespeaker at 11:02 AM No comments: 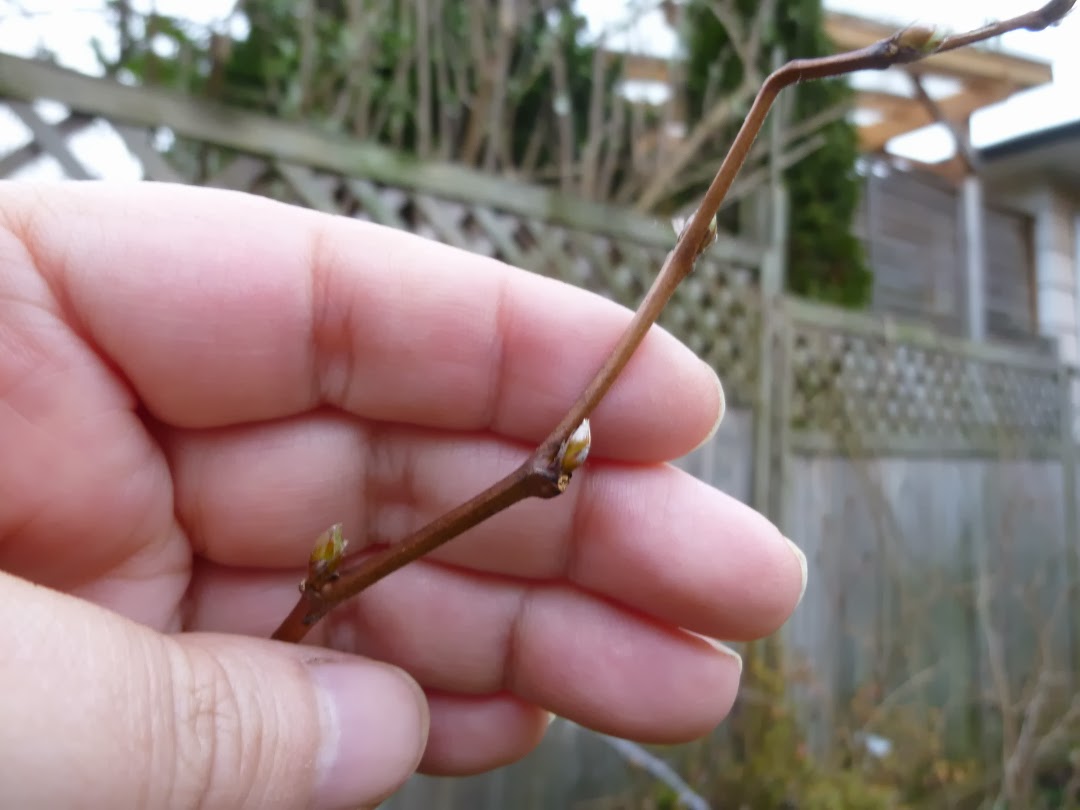 The shy leaf buds of a salmonberry bush.

January is a time of letting go of the old growth and embracing the new spring buds, blossoms and catkins. There are still some dead leave clinging to trees, hanging on against the January winds until they drop and become mulch for this year's new growth. The seeds that dried out in the summer and fall heat are waiting to sprout up and create new life. When you take a walk in January, pay particular attention to bark and buds. Which trees call out to you to reach out and touch them? Look at the textures and colours of bark. This time of year in Vancouver there are red osier dogwood twigs that contrast with silvery bark of oak trees against the soft grey morning fog. Look at the colour palette and the diverse sizes and shapes of spring buds: from soft ivory grey to bright purple and yellow-green. Test yourself: can you tell the name of the bush or tree by looking at its buds?

This week I see bright yellow hazel catkins for the first time, along with the snowdrop buds. I needed to go out to the garden to remove the wire mesh covering from my crocus bulbs so they can grow up unimpeded. I say a spell of protection under my breath to keep the squirrels away from the tender bulbs. I dare not repeat the words I used because I would frighten the children. I pass an alley laid with the corpses of Christmas trees waiting patiently to be mulched and the scent of the pine sap hits me like a balm. I feel badly I cannot salute each Christmas tree by name and vow to learn my evergreens this year. We owe it to our trees to be able to address them properly because they give us so much: clean air, fruit, nuts, building material, medicine, food, and and beauty. It's a good time of the year to marvel at the contrast between our coniferous and deciduous trees. Look up and celebrate the branches, bark, buds, and catkins of your friendly neighbourhood trees. Go on a walk with a good tree guide in your pocket. (Sometimes you can find fabulous vintage guides in the used book store.)

P.S. Don't forget to take notes of those berries that are attracting groups of birds to winter feasts.

Yesterday was the first day of the year I could detect the sweet smell of sweet box (Sarcoccoca). Spring is on its way! What are the phenological markers you look for in January?

This year I want to compose a calendar of the key phenological markers for Vancouver. I thought it would be fun to make a culture/nature calendar with the collection of key seasonal events over the course of the year. I'll be going into the research I've done over the years and organize it by season.

In 2012 I recorded this marker on Feb 8. Does this mean an early spring?

If you want to see the flies that are attracted to Sarcoccoca, check out this cool blog post at Cabinet of Curiosities.
Posted by Beespeaker at 9:29 AM No comments: 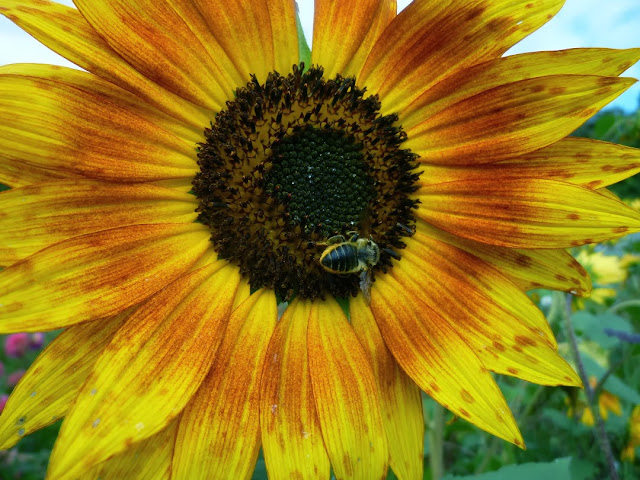 You can see this is a leafcutter bee by the bright  yellow outline of the pollen hairs on her belly. Can you see how her abdomen appears flatter than that of a honeybee? I took this photo last August at the Salt Spring Centre of Yoga. 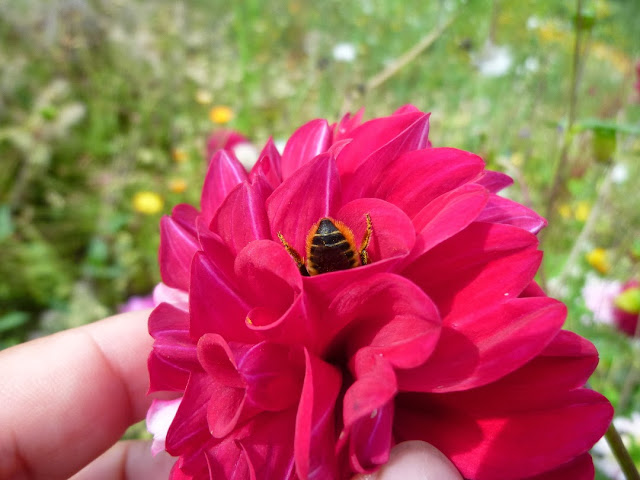 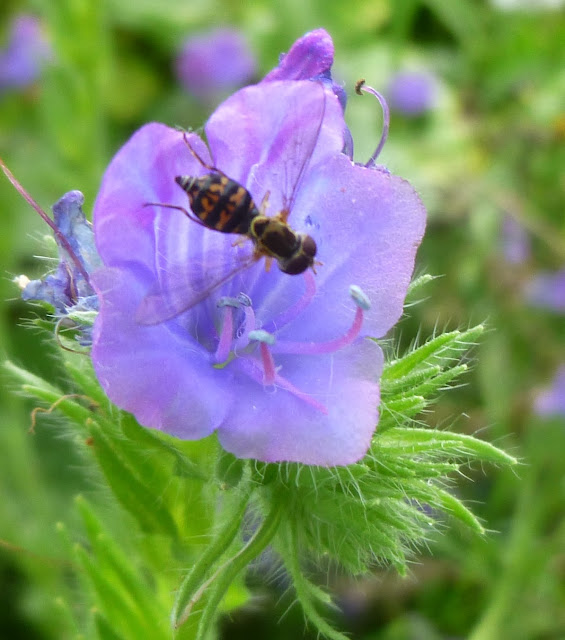 This is probably the wierdest photo I took last year. Does anyone know what kind of fly this is on the Viper's Bugloss?  In the meantime, check out this awesome post on Echium vulgare by Brian Johnston. Although you might think the pollen grains are blue, they appear transparent under the microscope.

One of my favorite bloggers, Sean McCann is giving a talk about his work with Ibycter at the Beatty Biodiversity Museum this Sunday. I am trying to get my work done today so I can check it out. Do check out his awesome blog and Bug Girl's feature on Sean's work in her fabulous Wired column called Charismatic Minifauna.

Id' also be interested in what you think of Bird Chick's two posts on Birding and Sexism, although it's really more about haters and online misogyny in general.

I was sad to hear that another blogger/chef I follow at Butter on the Endive is suffering from cancer. Make an apple tart this week and send Owen good wishes.

May your 2014 be filled with radiant joy and blessings.
Posted by Beespeaker at 1:38 PM No comments: