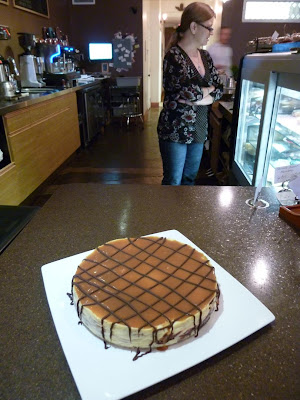 I have begun yet another kick at the "extremely healthy diet," incorporating lots of salads and cutting carbs and meat from my daily intake. Of course you know what happens when you start a restrictive diet, there's always that one food you start to crave like mad. My son and I have been sampling the cheesecakes at Mobius for a few weeks now and we are hooked. When the owner, Robyn Guinn described a banana cheesecake she was planning to make, I admit I began to fantasize about banana cheesecakes. I dreamt about them in my restless sleep. 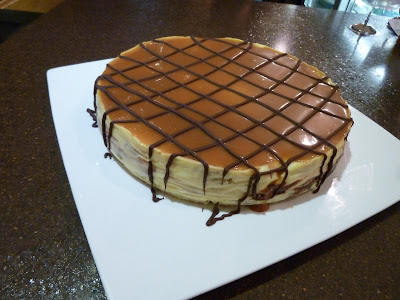 I looked at recipes for cheesecakes and having been curious about raw "cheesecakes" I have been doing research to see what they are made of and if they are a good substitute. In the meantime, Robin promised me there would be banana cheesecake today and so I headed to Mobius (near King Edward and Main) and found my temptation waiting in the cooler.  Not just a banana cheesecake, but a Banana Caramel Chocolate Swirl Cheesecake. I took a piece home and photographed it before digging in.  Folks, it is worth breaking your diet to have a piece of this cheesecake. "My goal is to make the women of Main Street curvy," Robyn jokes. The cheesecake is smooth and silky with the contrasting snap of big chunks of dark chocolate. The combination of banana, chocolate and caramel is outstanding. 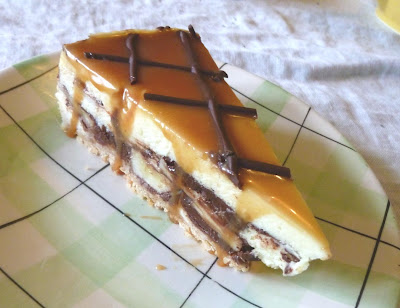 Both Robyn and the Mobius's other baker Nicole Harshey know their cheesecakes. Robyn gets a light texture from baking her cakes in a bain marie. I ask her how to avoid those big cracks in my own pumpkin cheesecake. She says the secret to avoiding cracks is to leave the cheesecake in the oven for an hour and a half after it is baked to set.

As an added bonus, these cheesecakes are GMO free. My friends know that I turn into the Ancient Mariner when someone gets me on the topic of genetically modified foods. I am anti GMO and think all GM products should be labeled so we can avoid being guinea pigs in certain companies' attempts to patent the food chain and destroy it in the process, so Mobius is an oasis to me: a GMO free zone. Eating these cheesecakes is a political act, folks. Be radical. Eat cheesecake!

Mobius Coffee and Tea is at 4125 Main Street, Vancouver.
Posted by Beespeaker at 8:33 PM