It's a quiet warm Sunday afternoon in September. A golden light reveals a black shadow on my neighbour's buddleia--a large Mourning Cloak butterfly opens its wings as it silently sips nectar. All is quiet on the southwestern front. And then all hell lets loose as two hummingbirds declare war on each other. They take turns flying straight up to gain the visual advantage, their high pitched squeaks warning each other until their beaks clash in a mid-air sword battle. Suddenly there's a third hummingbird involved, claiming a good vantage point watch the action from our lilac bush. The sparrows and chickadees hide in the shadows. And then just as quickly as it started, the fight has ended, or perhaps moved on to another yard where the sun is still warming the desired nectar. 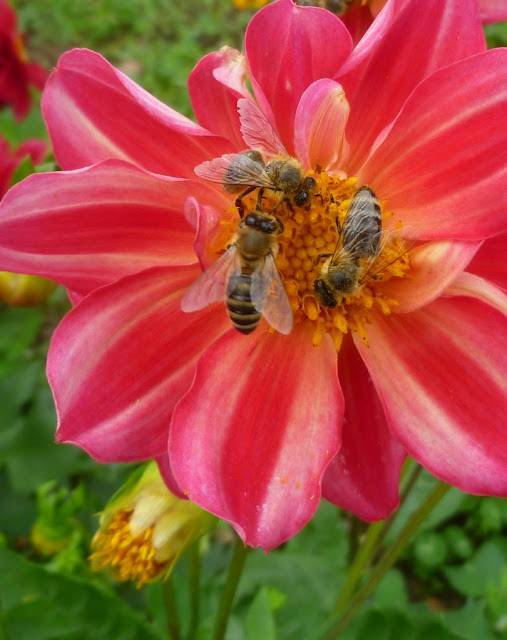 While we are celebrating an early harvest moon, floral resources are also dwindling about 2 weeks ahead of schedule. What does this mean to the bees? Competition for nectar and pollen is heating up. At a time of the year when country gardeners are entering competitions for best peach pie, longest zucchini, and the top annual floral display, bees are competing for the best flowers to feed them and save their lives. The French baker at the UBC Farm market apologizes for covering up his goods. "It's because of the bees" he says. "Pas les abeilles," I say emphatically. "Ce sont les autres, les guepes." I ask him how to pronounce it. It's gep, rhymes-with-skep. "Masculin ou feminin?" I ask. "C'est une guepe," he says. Oh la la, the women always get the blame. Wasps are furiously searching for food to feed themselves and their young before winter comes and kills them all. . . except for the queen of course. There are some distinct advantages to being female. 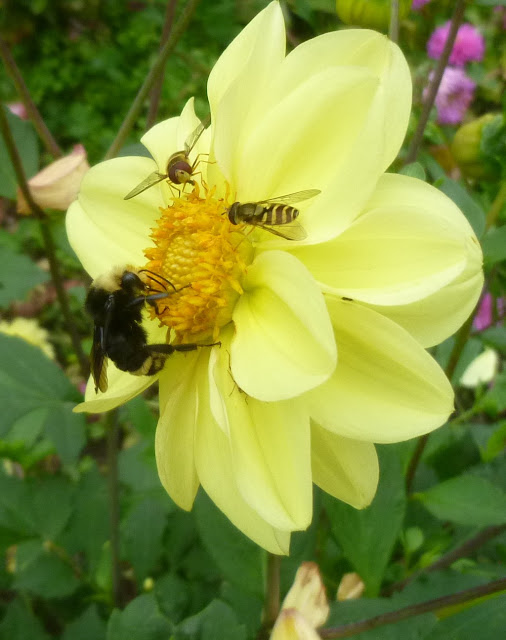 In the rows of flowers grown for bouquets their is a fierce competition going on in the dahlias. The bee-friendly dahlias that have yellow flat centres containing pollen and nectar are sites of frenzied activity with honeybees and bumble bees, each a miniature boxing ring with the biggest and strongest bees pushing the smaller ones outside the ropes. Bumble bees can wake up earlier and forage later, but honeybees have the advantage of sheer numbers. Besides, honeybees have a beekeeper who can feed them pollen patties and sugar water if they run out of foraged food, but these native bumble bees don't have that advantage, which is probably just as well. With so many honeybees sucking up resources I wonder how much is left for the bumble bees in this situation? How often can the dahlias replenish their supply? 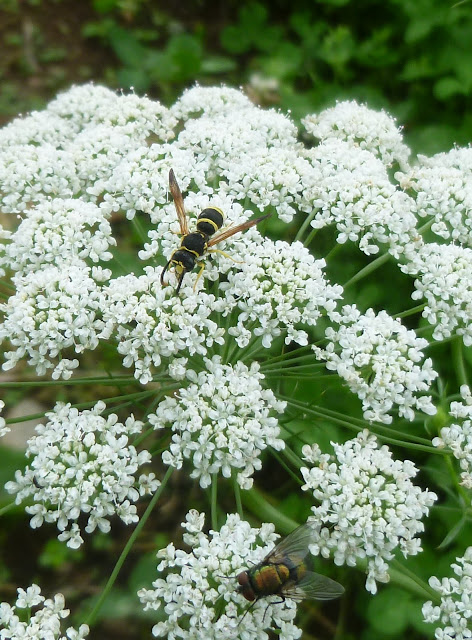 It's important to mention that any double dahlias bred so that they cannot offer nectar or pollen are silent. occasionally I find a bee butt sticking out of the petticoats of double dahlias, but they are wasting precious time and energy. You are not doing bees any favours by planting these flowers. The flowers offering pollen come in just as many eye-popping colours as the double duds.

There is also a lot of hymenoptera helicopters hovering over the Ammi (I think it's bishop's lace). These umbels are crawling with patrolling wasps and syrphid flies of various sizes. I could stand and take photos here that would create an amazing stop-animation scenes in a battle. The real B-movie. Another kind of beenado is happening over the garlic chives at 16 Oaks organic Community Garden. A vosnesenskii queen and one of her brood work side by side on the umbels of one plant. While other flowers in the garden lay empty and still, these garlic chives are bristling with dramatic tension. Similar battles are going on in the oregano and those good old brassicas. A flowering broccoli plant provides an important source of fall nectar in the city.

On looking at these photographs I note that in spite of the intense competition going on there also seems to be a higher tolerance for the close proximity of other insects feeding at the same plant. 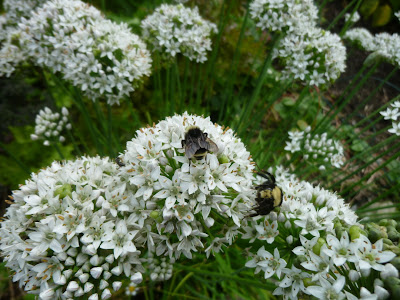 In his book Bumblebees; their behaviour, ecology and conservation (2010, Oxford University Press) David Goulson asks the question: how did the introduction of honeybees half a century ago affect the native bee population in North America? Were there native bees who could not compete with the honeybees and ended up becoming extinct? I could see that happening to an oligolectic* bee, especially one that needed crucial late summer forage. We won't know if bees were lost, but we can study the bees we have now. Native bees need our support. 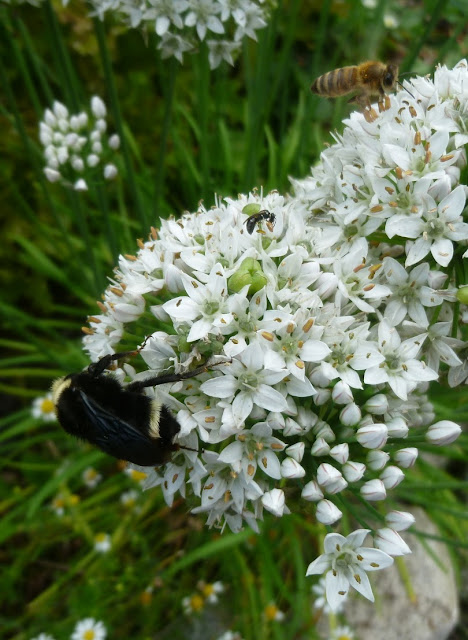 Fall is certainly a time when one needs to be conscious of the political nature of which plants you choose for which bees: native goldenrods and and asters need to be there in a critical mass for native bees. Abundant fall forage for honeybees means that they won't have to compete so much with native bees: garlic chives, oregano, perovskia, asters, helenium, nepeta, bee-friendly dahlias, false dandelion, sunflowers, sedum and any umbels that bloom late are essential. Also, we need to think about putting a cap on how many hives we allow per city block so that we do not stress our native urban bees to the point of extinction. I know some folks might find this hard to hear, but it's just common sense. There's only so much food at the pollinator buffet, especially as the days get shorter, floral choices narrow, and the volume of forage goes down. And soon, the rains will come. 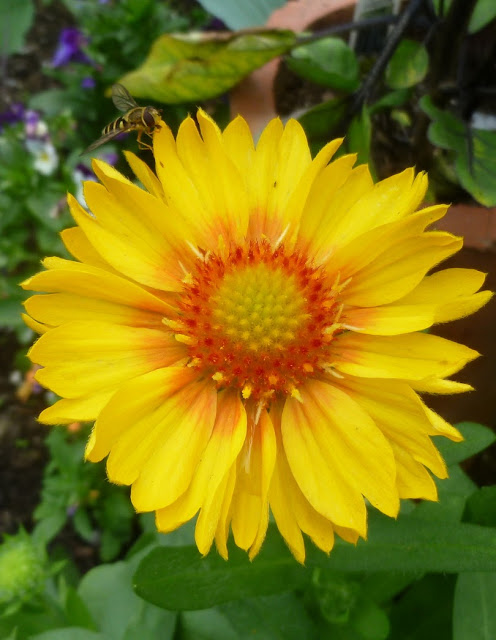 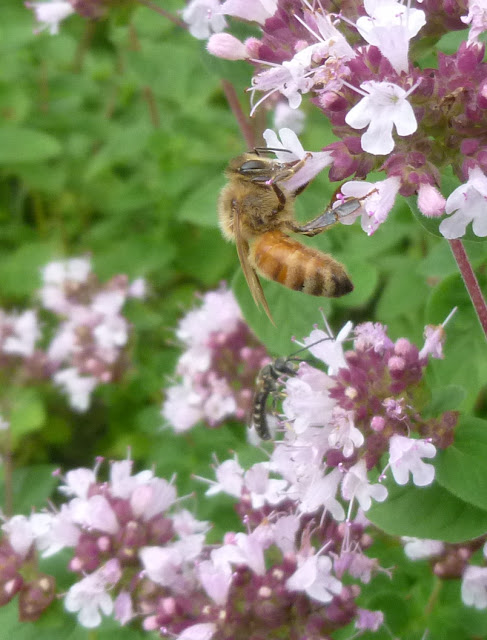 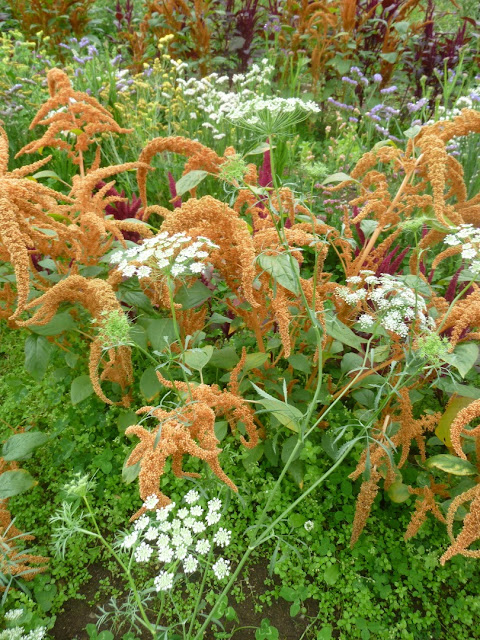 *Oligolectic bees evolved to have a narrow choice of forage plants, ie from one genus or species.

Posted by Beespeaker at 6:36 PM