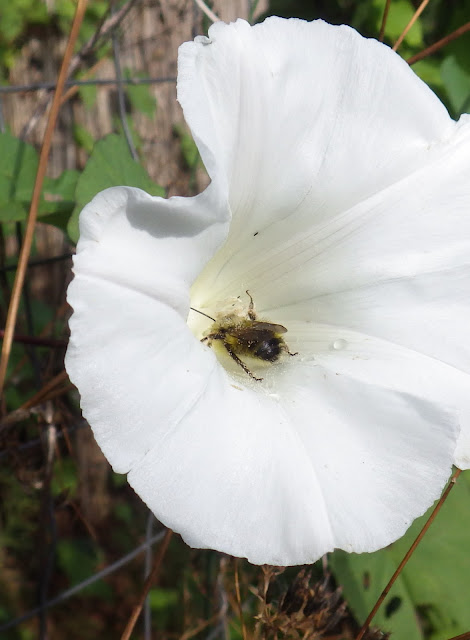 When I arrive at The World in A Garden at 9 am, I search for bees sleeping in flowers. This male bumblebee is just waking up. 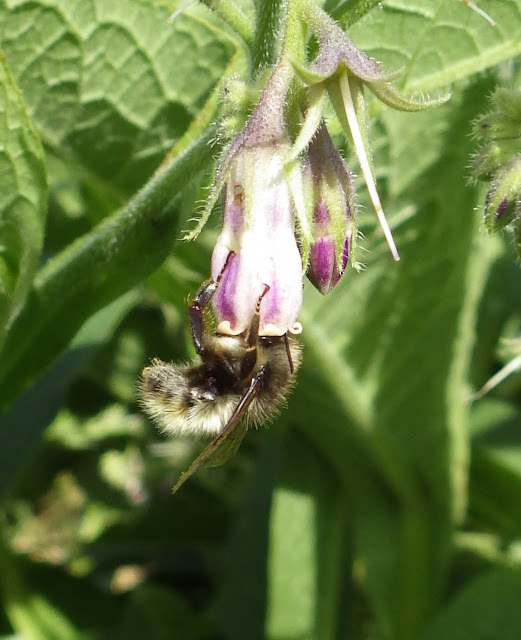 Later on, as the sun warms, male bumblebees head for the comfrey flowers. Male bumblebees are often silvery like this one, or blonde. 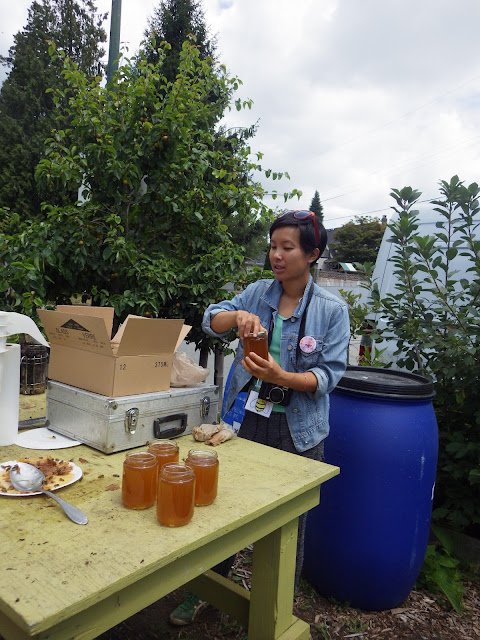 As the forecast for later this week is for rain, Joey and Marcus decided to extract honey while the sun was shining. 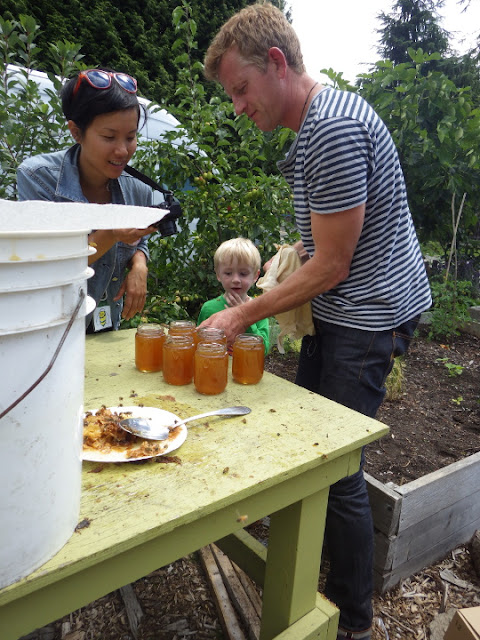 Now I see here Joey was capping the jars and soon after she was stung on the head. A bee got caught in her hair. Ouch! I removed the stinger and we "framed" it on a piece of tape for posterity. 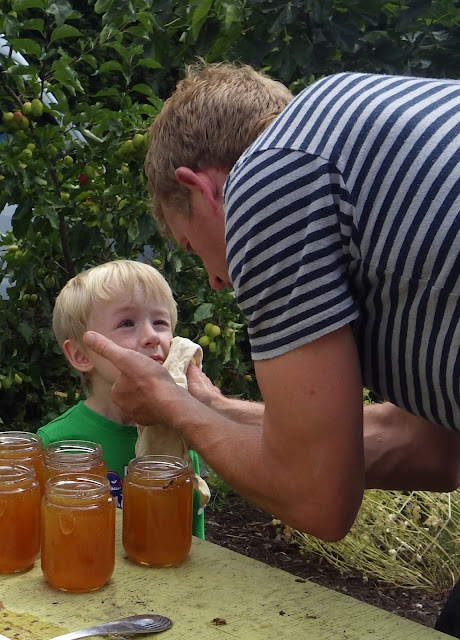 Marcus wipes honey off of sticky faces so no-one else gets stung! We did have one other casualty as a well-meaning student attempted to wash honeybees that got immersed in honey. She got stung on the finger. 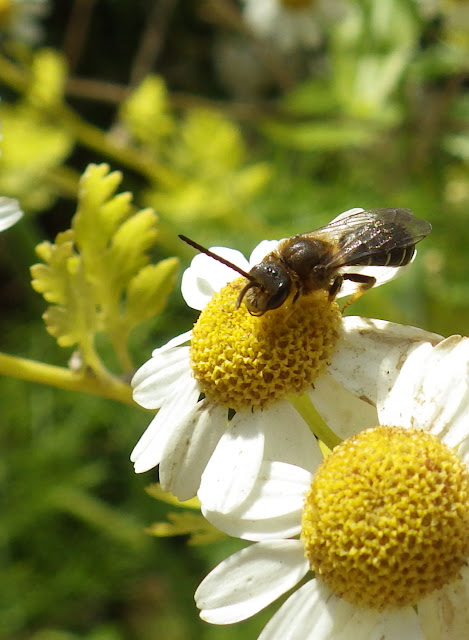 It was a fantastic day to see bees of all stripes, especially all the tiny sweat and mining bees. 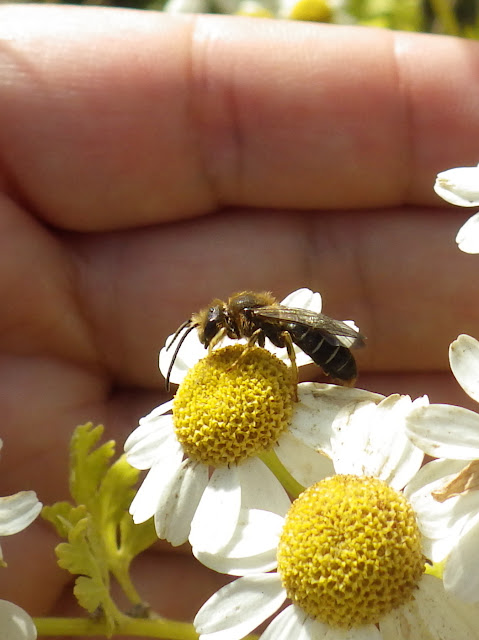 This was taken early in the day as the bee was waking up. Bees don't tend to forage on feverfew, so  he was just resting here. 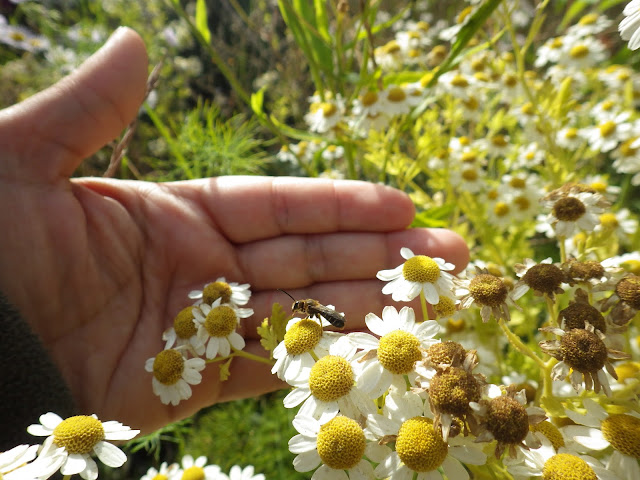 I've started using my hand to help my camera focus on the bee. 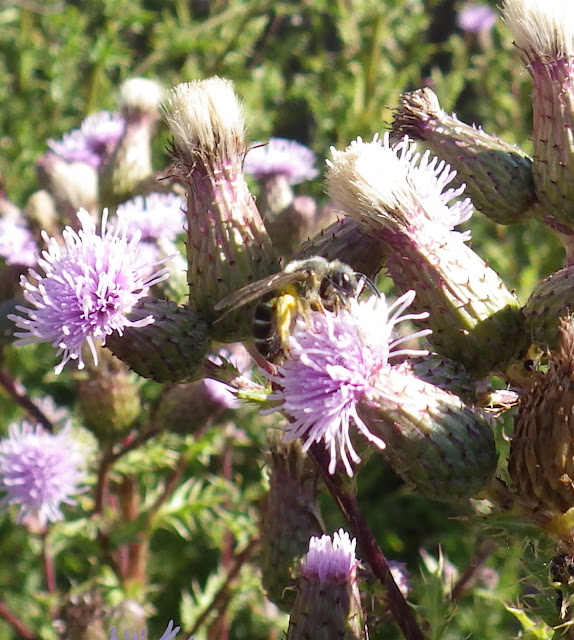 Always check thistles for bees. They are a definite favorite. They should definitely plant artichokes in this garden for the bumblebees. 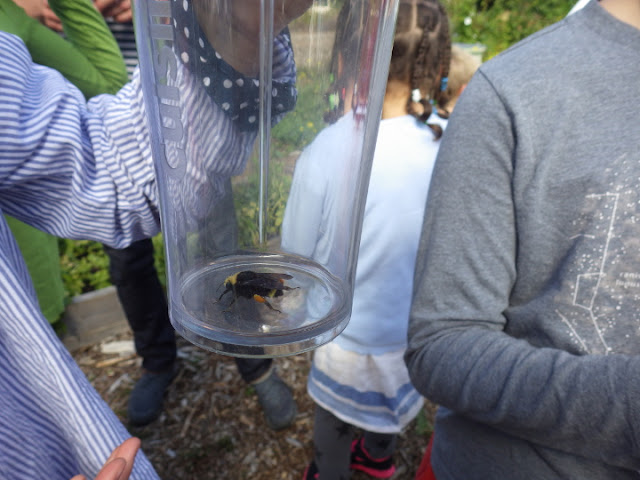 The bumblebee nests have produced new queens and males. 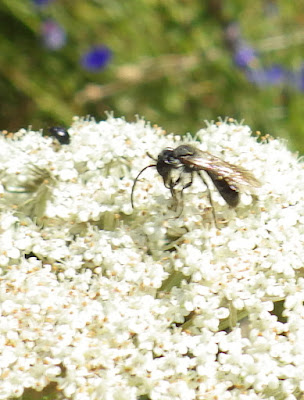 Also check for small bees in the queen Anne's lace, especially on sunny afternoons. The flowers were swarming with bees, flies, wasps and beetles. 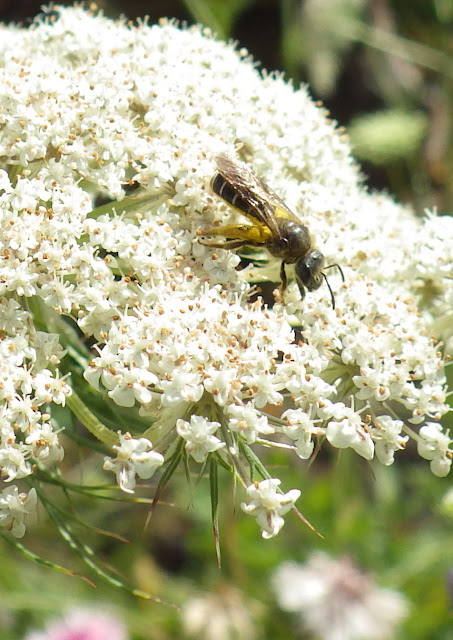 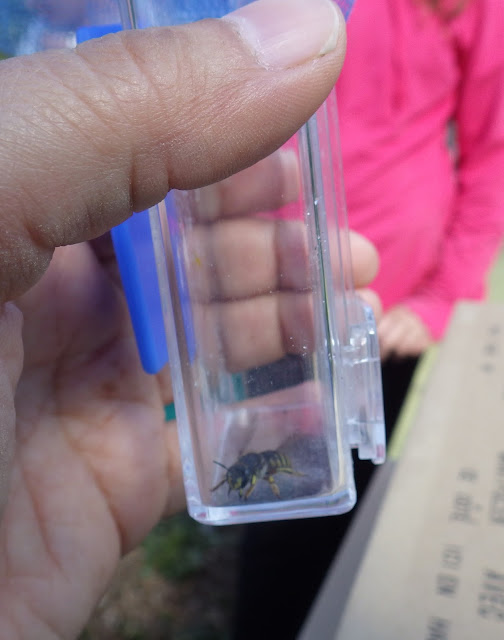 Many wool carder bees were caught and released. 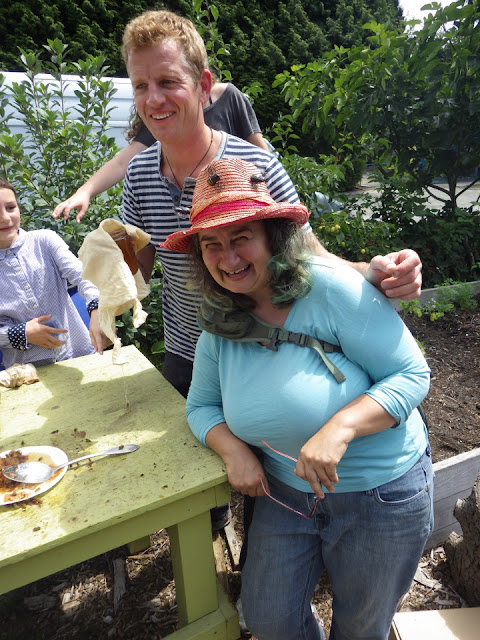 The bee teachers. We look happy! 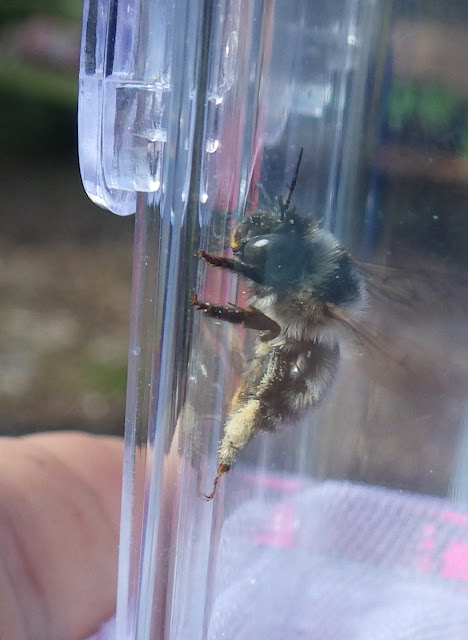 Well I was thrilled because one of the boys found ANOTHER rare bee! I'm pretty sure this is Anthophora terminalis, another ground-nesting bee. (ETA: It's actually the only anthophora bee that nests in rotting wood). It's another one I've never seen in Vancouver. 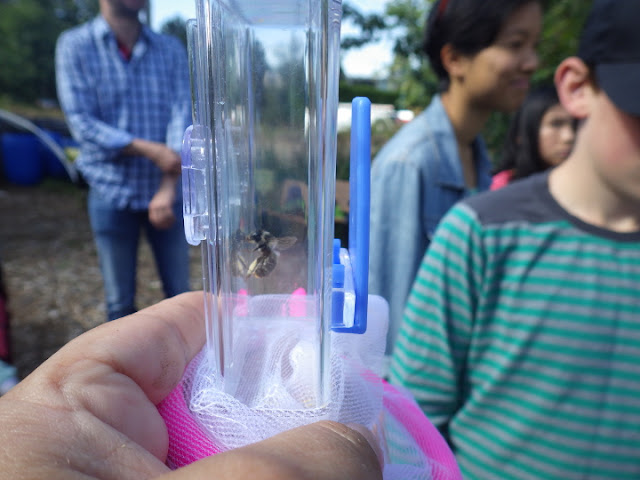 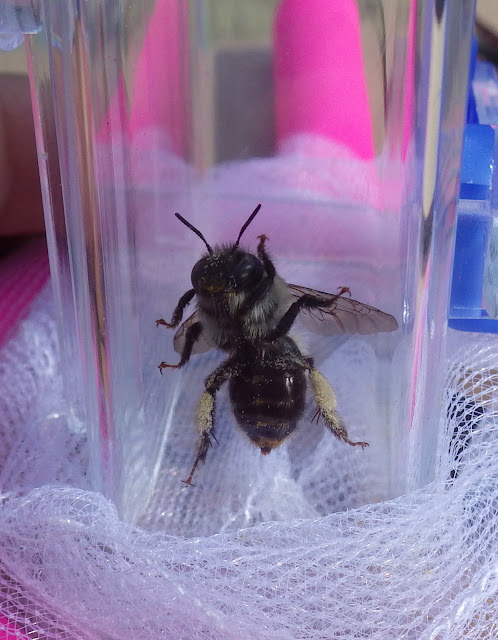 Can you see the red bit on the last tergite? 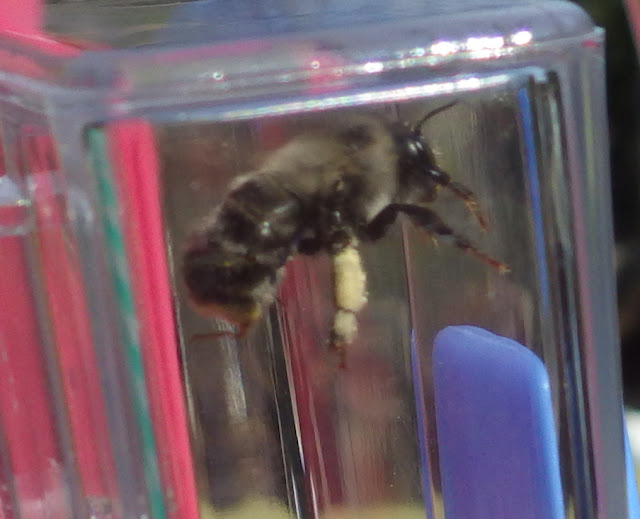 We'll need to think about planting the preferred forage plants of this bee. 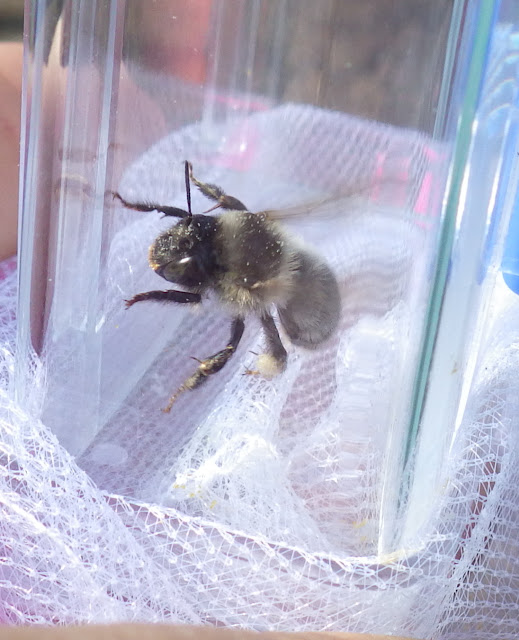 OMG: What a cute bee! For really good photos, and some great info on bees that lick sweat, check out this post from the Home Bug Gardener. 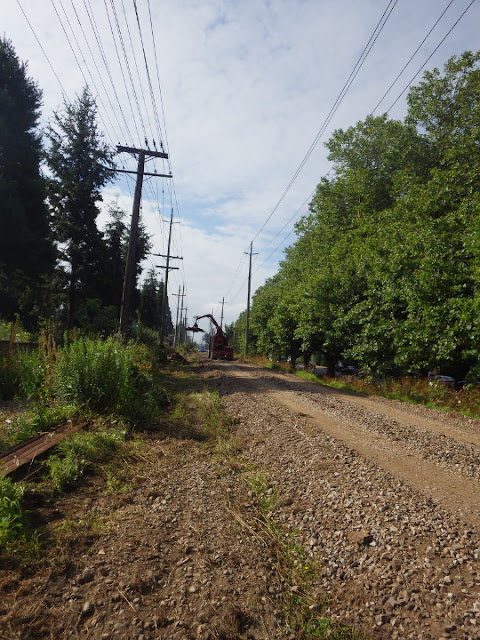 So they've taken out the railway ties. I have mixed feelings. The railway SLOWED people down, making this a fantastic corridor for pollinators. I also have a great nostalgia for the tracks because I spent so much time around them in my childhood in Saskatchewan. However, a bike trail here would be good and the creosote on the ties is toxic. Still, every time earth is moved--ground nesting bees suffer because they lose nests. All these things need to be considered, especially with rare ground-nesting bees in the vicinity.
Posted by Beespeaker at 11:40 AM