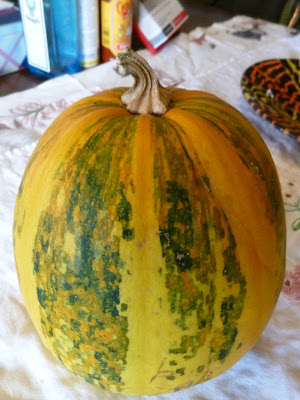 We often celebrate the beginning of a season: the first asparagus spear or strawberry, but we rarely mark the end of the season. I believe the poignant process of letting go of a food should be ritualized as well. I grew a Styrian pumpkin last fall and I was so proud of my striped novelty that I couldn't bare to cut into it. It was green when I picked it and over the fall and winter months it sat calmly on my window sill developing shades of orange and gold. Whenever I looked at it it made me a happy gardener. 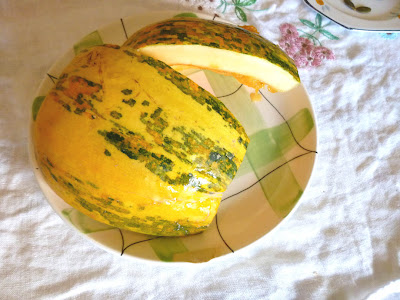 The point of growing it is to eat it, so I finally decided to take the plunge. I cut it up and roasted it, making two of my favorite desserts: pumpkin pie and a Gujarati pumpkin dessert. I made a walnut crust for the pumpkin pie and realized I should not have pre-baked it as it became somewhat over-browned as I cooked the custard. Nut crusts probably work better with unbaked pies anyway. 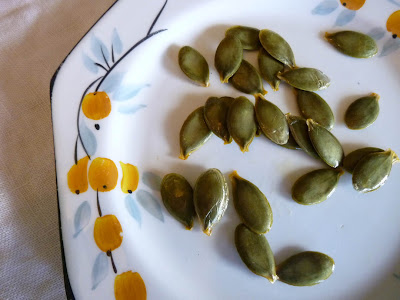 The seeds in Styrian pumpkins don't have shells and they make the best quality pumpkin oil. When we were in Vienna we found a market stall that carried several kinds and grades of pumpkin oil included roasted pumpkin seed oil which has a rich, toasted flavor. 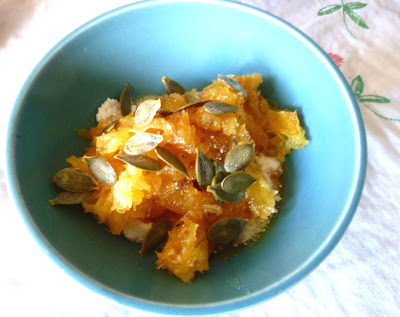 We used to go to a restaurant in Kits called Surat Sweet. The owner was a staunch believer in cooking seasonal foods. He would only make mango lassis when mangos were in season and when fall came around he made a dessert with pumpkin and cardamom. I am imitating it here with ricotta, warm roasted pumpkin, green cardamom seeds and maple syrup. I roasted the seeds and used them for garnish. So long pumpkin season, we'll catch you again in the fall.
Posted by Beespeaker at 8:06 PM