I have wanted to see the tree sanctuary for a long time and since I had burning questions about linden trees, I asked my friend Robin if she wanted to go to the Riverview Horticultural Centre Society linden tree walk and tea. The morning clouds burned off and after watering Catherine's pots I came home to make a quinoa salad with snow peas from the garden. It was a rare midsummer evening when we headed east towards Coquitlam. Robin had gone on the internet and carefully planned our route to avoid the freeway, which is often congested with aggressive commuter traffic. And in spite of Robin's best navigational efforts, we got lost. We wandered through residential streets to get our bearing, heading north and east until Robin found the street she was looking for. Due to spring construction the roads had recently changed and the signage was disfunctional, but we managed to find our way through the back route. At the end of a winding tree-lined road we finally found the Riverview grounds.


There is a bus route that goes through the grounds which Robin used to take when she lived in a nearby town. The temporary signs with florescent pink arrows indicated a movie was being shot somewhere on the grounds. There are buildings here and there, but they are discretely hidden by trees. We passed two men sitting on benches who looked like they were movie actors in costumes from the 1960's--round sunglasses and leather vests. But then again, they could have been staff, or even residents. Robin says that many days there would to be a man gazing out at the fence in a sou'wester--a silent sentinel, watching and waiting. I wonder about his story. 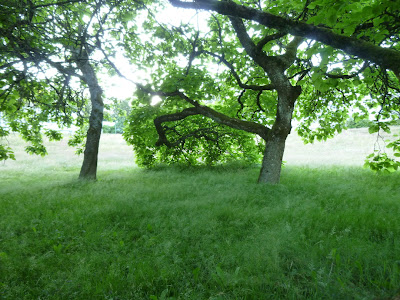 After driving through a maze of roads we finally found a Riverview Horticultural Centre Society flag and a small hand-drawn sign indicating we were in the right spot for the tour.  Robin spied a woman doing some garden work, so we assumed she was our leader. We had our picnic--Robin had made oatmeal chocolate chip cookies and I brought along some of Jackie's Earl Grey shortbread from Shaktea. We sat on a bench across from a linden tree.

Having done several art projects with tree leaves, Robin has researched the cultural history of specific trees. She is my perfect tour guide! The grounds are full of a diversity of majestic trees. Some are planted in groupings, which have a dramatic presence, reminding me of Henry Moore sculptures. I look up at four pines shoulder to shoulder and tell Robin they look like they should be called "The Four Sisters." Some stands are a mix of are vigorous volunteers. The grass is long and full of clover, prunella, and yarrow. (These are three powerful medicinal plants. Prunella vulgaris is also known as self-heal.)  "Isn't the yarrow beautiful?," RHCS's Norma Gillespie says. "This is what it would look like if you didn't cut your lawn." There are some species of flowers coming back into the grass, but the grass is still quite dominant. There are firemen performing a drill and testing their hoses, which is a great way of preventing a fire in these dry July conditions. 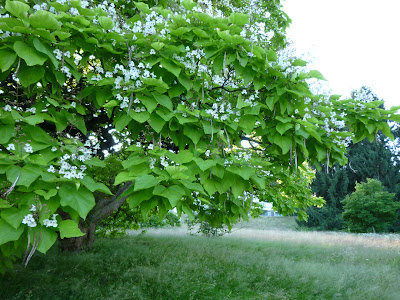 There are about fifteen of us in all-- ranging in age from 6 to over 60. Some are more mobile than others. One woman follows along in her car, determined to catch what she can in spite of mobility issues. They need one of those big golf carts like they have at VanDusen Gardens. There has been some confusion in the publicity and it turns out the tour starts at 7:30 pm, so by the time the local arborist shows up and everyone signs in, I'm a bit cranky because it's been a long day and we are losing the light. What's the point of a tree tour in the dark? Anyway, after I vent my frustration, things get underway and I can focus on the trees.

These catalpa trees are planted in a stand that envelopes you as if in a protective embrace. Robin says it would be a great place for a theatrical event. Someone mentions grazing sheep and then somehow we get onto a vision of Midsummer's Night Dream with an al fresco dinner of roasted lamb skewers. We imagine children playing in here, whiling away the summer hours. I think of those dark hours I have had, and how one imagines a place like this where you can escape to hide your pain-scored soul and heal, letting the trees be your medicine. 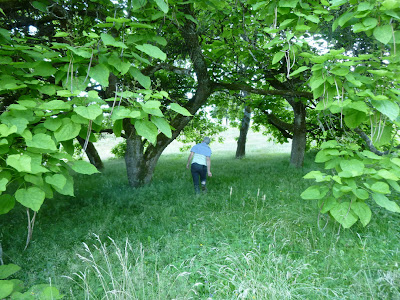 The trees have been evaluated for their monetary worth. Some, like the weeping beech are very rare and valuable, but can you really put a value on the ability of these trees to heal broken human lives? These grounds contain traces of tragic lives, but there is a quiet dignity here, a living memorial to the primary intention of the place, which was meant to make people whole. Unfortunately we all know the sad history of mental health care and how it evolved and is still evolving from cruel to compassionate treatment. The real cruelty was closing the institution down and forcing vulnerable people onto the street without any care at all. This needs to be addressed. What better way than to re-open the place as an arts center and retreat?

There are still three buildings prividing care for 65 long term mental health care patients. Unfortunately, the hospital was closed in the summer of 2012 and the government is considering the value of the lands for development into--you guessed it--condos. As a result of the pressure to develop the land Riverview is in Canda's Heritage Foundation has put Riverview onto its top ten endangered heritage sites.

From their website, here are some ideas proposed by the RHCS:

Our vision for the Lands has included: A sanctuary and therapeutic milieu for people with mental illnesses, contributing also to their recreation and employment. A horticultural centre, with education facilities for the expanding nursery trades, landscape, arborists, forestry courses, research facilities, a horticultural therapy program and display gardens maintained by garden clubs An arts centre with space for the visual and performing arts, filming locations and indoor and outdoor performing areas A conference centre with space for retreats, training events, and banquets An educational and community centre and recreation area. 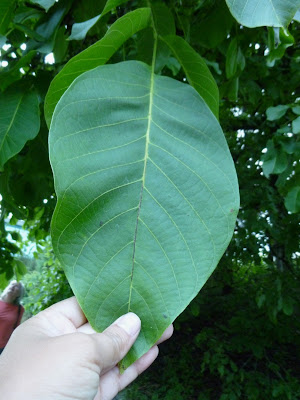 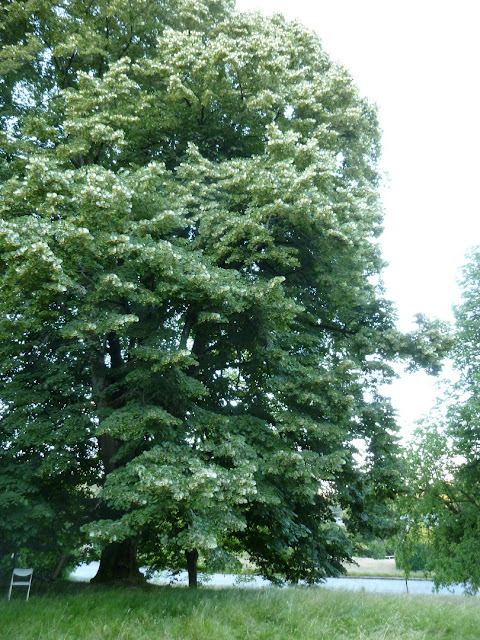 After we looks at redwoods, maples, oaks, walnuts and beeches we finally come to the giant silver linden trees in bloom: Tilia Tomentosa. The fragrance is sweet and even more powerful than the other varieties of  linden. There is a little teapot on a Bunsen burner and a picnic table and folding chairs. At first I think it's part of the movie set, but then I realize this is the tea! However, we are losing the light and since it's not actually tea made from linden we decide to skip it and carry on with the tour.

Tila Tomentosa is one of the kinds of linden that is reportedly toxic to bees. Is it related to the narcotiv effect of the flowers, which can make humans drowsy or is it something about the sugars in the nectar that bees can't digest? I have a chemist working on helping me look at the latest research on these questions. In any case, I see one bumble bee and one honey bee foraging in the dim light and they don't seem any worse for wear.  Please note, this is NOT why the bees died in the Oregon parking lot. (Story in the post here.)

Robin has just returned from Berlin where the linden trees have had to be replanted because they were cut down as firewood during WW II. One woman on the tour asks if she can take some blossoms to her friend who is from Germany. I tell her to warn her friend not to operate heavy machinery after drinking the soporific tea made from those flowers.

The women from the RHCS point out that all but one of the buildings are kept up and could be used by other groups. "We stand in front of a hall with many windows. This building has so much natural light--it is perfect for arts groups." We go around the only building that has been deemed unsafe (because of falling roof time) and a woman points out a great horned owl sitting on one of the window ledges. (I think it's a short-eared owl, but apparently horned owls sometimes lay their "ears" flat. Also, I think this is a juvenile.) The West Lawn building turned 100 yrs old this April 1. 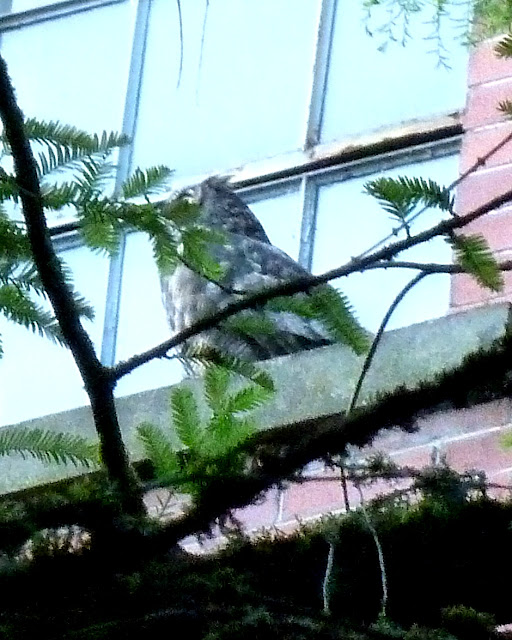 Whether or not you believe in ghosts, the grounds convey a spirit of loss.  I did not expect to find the photograph below in my documentation. It's not my style. It is as if someone else took this picture. 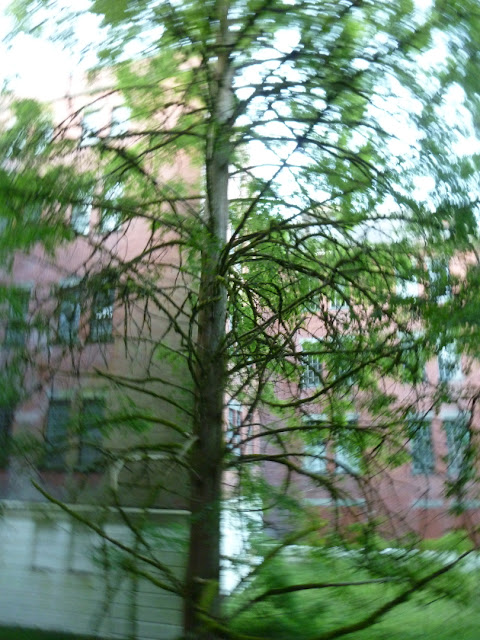 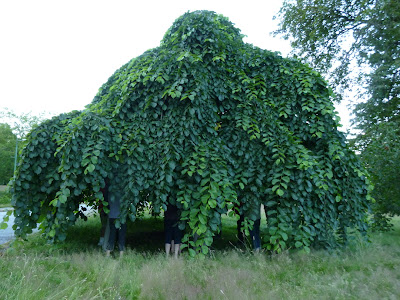 As we finish up the tour, folks come by offering us lemon linden pound cake and chocolate chip cookies. By this time I am overwhelmed by the desire to help the society save this unique treasure. Save Riverview. Save the trees. How? You can start by joining the Riverview Horticultural Society--it only costs five dollars. Check out their tree tours and events here. 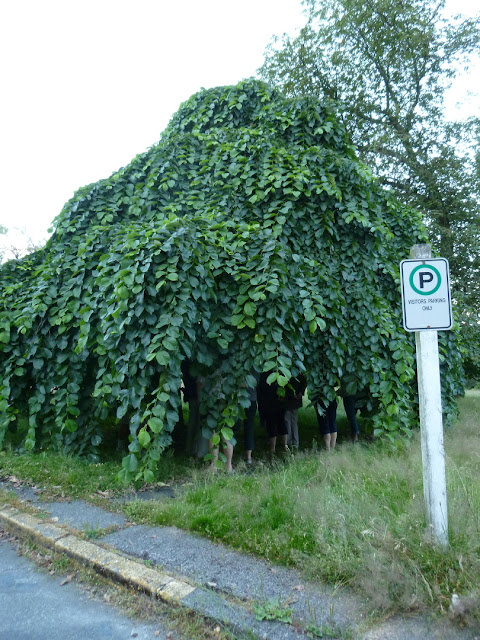 As a post script, I discovered a very good short video of a nurse recounting some memories of Riverview, focusing on two "mannish women" who spent part of their lives there because they were rejected by society at the time. It's called Asylum by Lisa G Nielsen. The video is part of a trilogy, and I highly recommend taking the time to watch it.
Posted by Beespeaker at 11:03 AM