It's a muggy hot afternoon in August. I have come to the Cedar Cottage Neighborhood House to do a bee safari with a group of 6-8 year olds. I arrive early to assess the situation and see if there are any bee plants in the immediate vicinity. The older kids are rounded up for a game involving a ball and chalk squares drawn on the ground. One of the boys is declared out and he seems upset. He goes and sits down on a log and quietly starts to sob. I go over to him and quietly tell him to take a deep breath and murmur encouragement. Then I leave him alone. The game is going on, with rules that puzzle me. I'm not the only one as other kids get frustrated and tempers flare. Another boy stops and lies down on the chalk square. He begins to cry. To my amazement I realize he is the identical twin of the first boy who succumbed to the heat. I try to calm him and hand him some lemon balm, but he pushes it away. 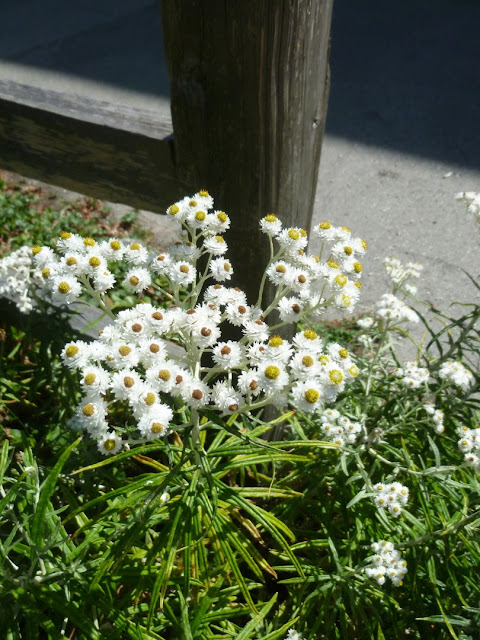 Okay, I've got a bunch of kids I don't know, who are overheated and volatile and we're going to be around stinging insects. This sounds like fun. To my delight there are all sorts of vegetables in raised beds growing all around the neighborhood house. Two girls want to water the corn and squash so I show them how to hold the hose to water the soil, not the leaves. "We don't need help," they tell me and water the leaves. I'm on a winning streak. 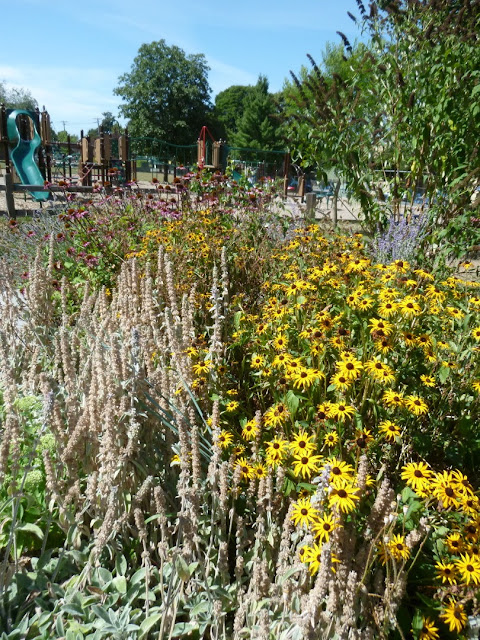 After two minutes they get board, so I finish up the watering. On a hot day like this I can't help "accidently" spraying a few kids. The boys who were playing the game on the pavement dare me to soak them and I do. This is summer camp after all, and we all need watering. The councellors  round up the kids and sing my favorite song I love to hate: "I'm scooping up a baby bumble bee. Won't my momma bee so pleased with me?" It starts with scooping and ends with puking. It's not a pretty song and it advocates cruelty to bees. Just great.

Before we head off on our walk, I take the group of 12 youngsters to a garden bed. I take a male blossom off the plant and close the top. "Do you know how to act around bees?" I ask. Don't do this, one girl demonstrates and she runs around flapping her hands and screeches." "Yes, that's exactly what you don't do," I say. You need to take a deep breath and move very slowly, like in Tai Chi. I take a male blossom off a squash plant. "Do you know what's in here?" I ask. "Is it a bee?" "Yes, and I'm going to see if she'll crawl on my hand." I can see a frisson of revulsion shiver through a girl's shoulders. "I'm scared", she says. "It's going to be okay," I say. I open the top of the blossom and she flies up and back into the squash plant. "You see, she doesn't want to bother me," I say. She just wants to pollinate this squash. And I explain how bees take pollen from the male blossom and put in on a female blossom so it can produce a squash like the ones we see developing on the plant. "Without pollination those squash would have died," I explain. 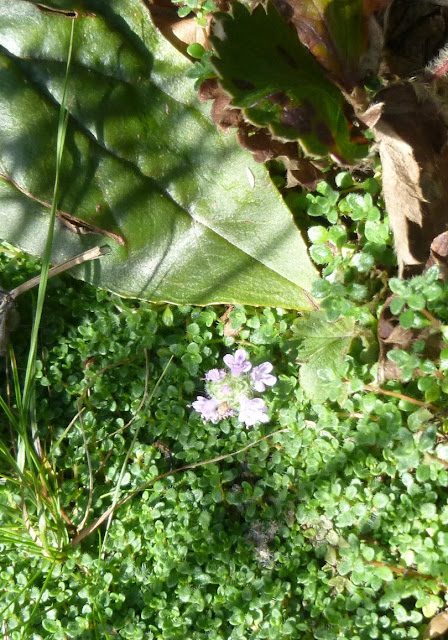 I am relieved to be working with the youngest of the kids. They are wee 6-8 year-olds dwarfed by their huge backpacks. We head to the school garden. "It's a bee nest!" They shout and point at a tree. Perched above the cars on a boulvard tree, a classic paper wasp nest hangs from a tree. Aha! This is a teachable moment. I explain that the wasps chew up wood from the fences and create a paper pup which they form into a nest. Winnie the Pooh is all wrong, I say. The illustrator didn't know anything about the difference between wasps and bees. If this was made of wax it would melt and fall off the tree. "Oh, now I see," one bright little girl says, the light dawning in her eyes. Success!

"What would happen if you threw a soccer ball at that nest?" a boy asks. There's one in every crowd. "You would get stung because the wasps would try to defend their babies," I say. But if you don't bother them, they won't bother you. Then I explain to them my ritual of giving a sacrificial piece of salmon to a hungry wasp at a picnic. I tell them to take their picnic plates inside as soon as they finish eating and keep all garbage under a tight lid. Then I tell them to pour any sweet drinks from a can   into a glass or a bottle with a lid because wasps can crawl into cans and you can get stung by accident when you drink from a can. That's wasp safety 101. "What if you kick a wasp and step on it?" the same boy asks, and the questions continue. 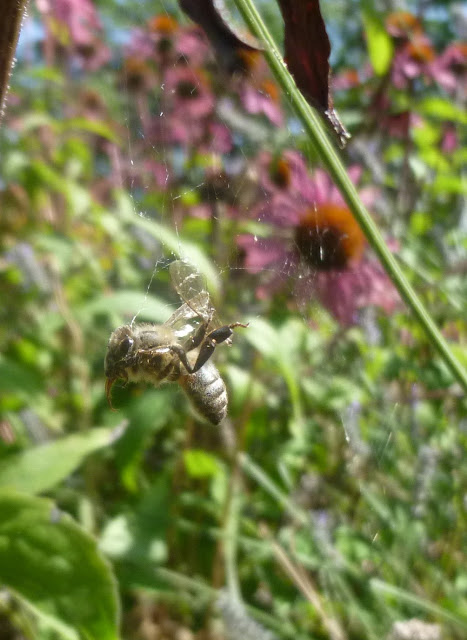 When we get to the garden, I see it's going to be tricky to get everyone in a spot where they can feel comfortable. We are pretty squished for space and there are bees everywhere. "Please stay further away from the flowers if you are afraid," I say, giving them a way to feel safe in the garden.

"I'm not really interested in this garden, one girl says, full of summer ennui. "This is my school garden."

"Well, maybe we can see something new," I say.

I give them my spiel, talking about bees using the examples of what we see in the lavender, wooly lamb's ear, perovskia, rudbeckia and echinacea. I explain that the blonde bumble bees are the males and they don't sting. "You can even catch them in your hands. Do you think I should do it?" They dare me and I catch a little blondie and show how he flies away from inside my hands back onto the flowers. "Do it again! Do it again!" 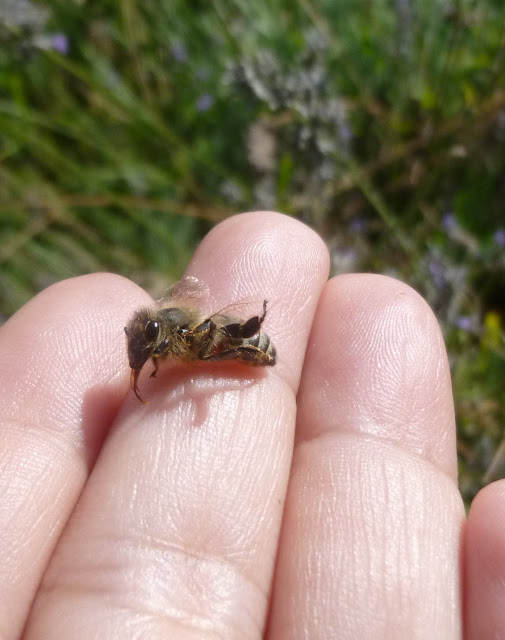 Then I see a wasp chomping down on a bee caught in a spider's web. When the wasp leaves I take out the dead honeybee and show them. It takes a while to convince them she's really dead, but then they take turns touching her and I leave her on the fence for them to observe. "Can you break that spider web so it doesn't catch any more bees?" the girl says. This is the girl that was repelled by bees about an hour ago.

We form a circle and do the bee dance before the kids settle down for their snack. One boy tells me a tall tale: "My friend got scratched by a bee and my brother punched the queen and stepped on it!" he claims. "That's an interesting piece of fiction," I say and move on. 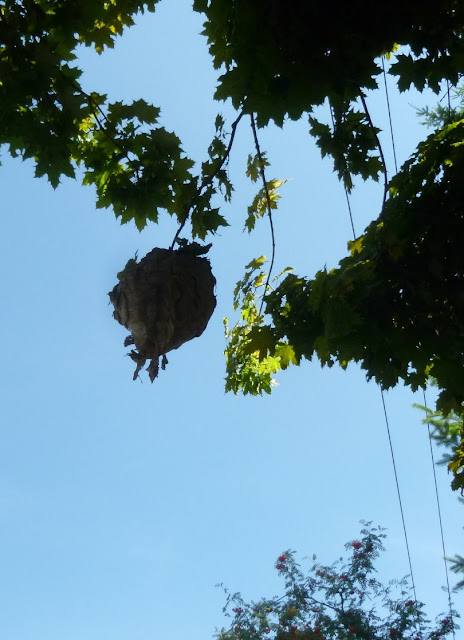 We walk back to the neighborhood house past the wasp nest, having had a good safari in the heat of the midday sun. I walk down to the Cedar Cottage Community garden where beekeeper Peter has opened up the hives and is looking for a queen. "I hope he doesn't punch her and step on her," I think to myself and head down the hill for a long, tall glass of iced tea.
Posted by Beespeaker at 9:08 AM