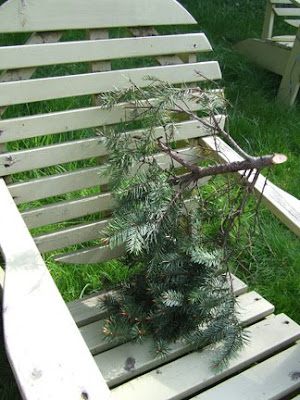 On Sunday (April 11) J and I were just about to do a hive check. I'd just finished lunch and my partner said, "Honey, look out the window, something's happening with the bees." Sure enough, the yard was full of a cloud of bees getting into swarming mode. Thank goodness we were home. I got into my beekeeping suit, my heart thumping away as the adrenaline started to pump into my body. A neighbor across the way started yelling at me to do something. I followed the bees into another neighbor's yard two doors down from mine, but then wouldn't you know it, the bees chose to land in a tree in the irate neighbor's yard. I grabbed a banker's box and a pair of scissors and knocked on his door. I heard vicious barking. My adrenaline went up a notch. I apologized he told me he was allergic to bees. I assured him they were not in stinging mode and I would get them down as soon as possible. 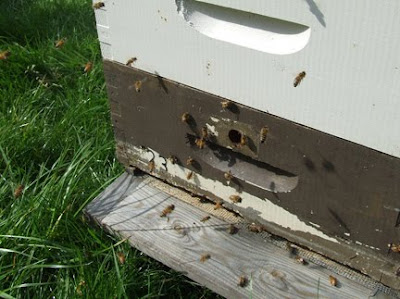 Fortunately his neighbors were helpful and friendly. Fortunately they had a ladder that would reach up to the garage roof I needed to climb up on to get to the bees. Fortunately the adrenaline rush meant that in spite of my fear of heights I got up on that roof and started scooping bees into the box. The Nasanov reflex kicked in immediately and the other bees followed the scented trail. All along the edge of the box, bees had their butts in the air fanning their wings. It was a beautiful sunny day and my hands were shaking. All I could do was wait. I might as well enjoy this, I thought. So I took a deep breath and tried to calm my body in by breathing in the scent of the spruce tree and rest my eyes on the intensely blue sky. There were a hell of a lot of bees. The majority of the hive had swarmed. 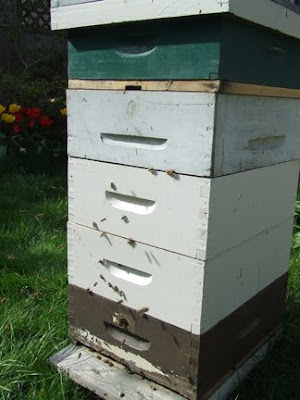 Of course all the while I was kicking myself for not opening the hive sooner and adding more space. The weather had been so crappy that it didn't give me much of a window to open the hive. It was almost as if a giant batch of bees matured at the same time--a real surge in the population. As the box began to fill I realized I would need help getting it down from the roof and also I needed I bigger box! I shouted over to P to get J and a big box with a lid. We ended up using a large Rubbermaid tub. I put the cardboard box into that tub, then I used J's secateurs to cut off the spruce branch the bees had landed in. Sometimes the smell of the queen's pheramones rubs off on the branch so I wanted to keep it in the hive just in case. 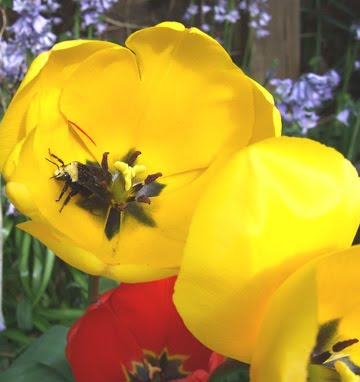 Luckily we had a couple of extra hive boxes, a bottom and a lid so we could house the swarm. Once they'd settled down we put in a layer of frames. It actually took them a couple of days to settle down. Yesterday we flipped the boxes so the frames are now at the bottom and today I removed the pine branch and put in a pollen patty and a jar of sugar water to boost their wax production. They're all settled at the bottom of the hive now, busy building comb. 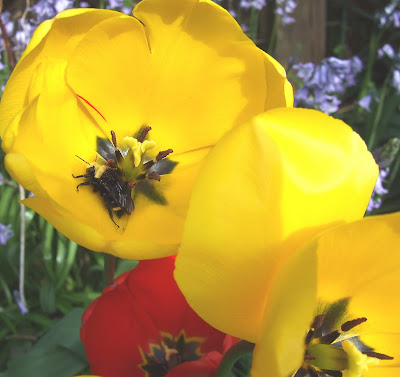 In the photos above you can see there is a hole in the front of the brown box. I find it fascinating that that is by far the favorite of the three entrances available to the bees. Yesterday we did a check of the original hive and knocked off the queen cells. I'll go into more detail about that in another post. For now, enjoy the lovely bumble bee I found resting inside one of my sunny yellow tulips!
Posted by Beespeaker at 6:39 PM