This event will mark the anniversary of the reading of the Riot Act in Vancouver, British Columbia, Canada on April 23, 1935 by Mayor McGeer to an assembled group of unemployed workers, their families and supporters. It is the first in a series of Rereading the Riot Act events, curated by Anakana Schofield.
Meet us outside 16 E. Hastings at 2pm on Saturday, April 23. We will make our way to Victory Square from there.

Rereading the Riot Act intends to provoke an emotional, politicized engagement with civic space and how or whether we want to narrate (back) to it. We also hope to re-inscribe Vancouver's history of labour struggle and mass protest into the commemoration of the city's 125th year. Rereading The Riot Act will culminate in a publication to be released in September 2011.

UNIT/PITT Projects gratefully acknowledges the assistance of the Canada Council, the BC Arts Council, and the City of Vancouver. We are also grateful for the support of many artists and cultural workers, without whom we would be unable to continue. 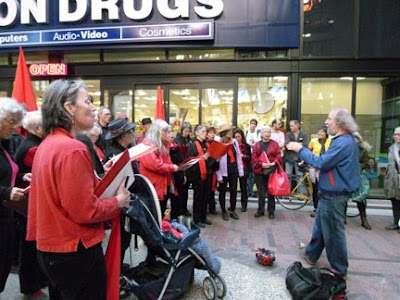 I hardly ever go to downtown Vancouver these days because it depresses the hell out of me. I hate shopping malls. I hate the big box stores. I hate the cement and concrete. The architecture is cold and uninspiring. The rampant consumerism sucks the joy from my heart. What an interesting journey it was to travel through the shadow and the valley of this capitalist darkness into the warm afternoon light of Rereading the Riot Act. 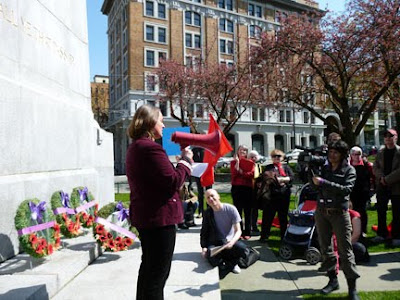 This collective event was the brainchild of my friend Anakana Schofield, a brilliant writer who is also starting an exciting new career as a performance artist. It always takes someone like Anakana to breathe new life into the discipline, and she is generously bringing us along by asking other artists to respond and take part in her events. 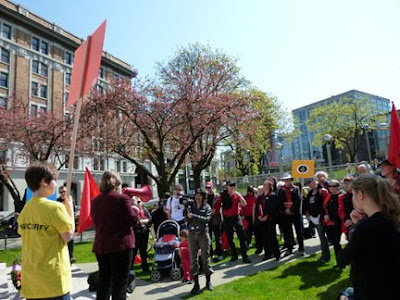 I loved watching the members of the Solidarity Notes choir arrive, greet each other warmly and warm up their voices and bodies. They infused the event with a spirit of inclusiveness, fun, and a sense of the history of class struggle and worker's rights. 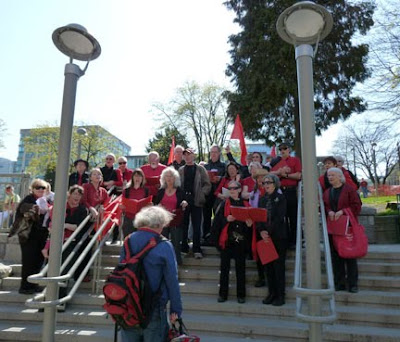 Each artist that performed or read at the event hit their own notes of solidarity, from Carol Sawyer's wailing vocalizes to Bobbie Kozinuk's socially critical performance vignette. This is the kind of performance that used to happen when I first came to Vancouver that inspired me to make it my home. As Vancouver becomes more and more of a resort town we need these interventions to keep the city's critical voices free and alive.
Posted by Beespeaker at 4:26 PM