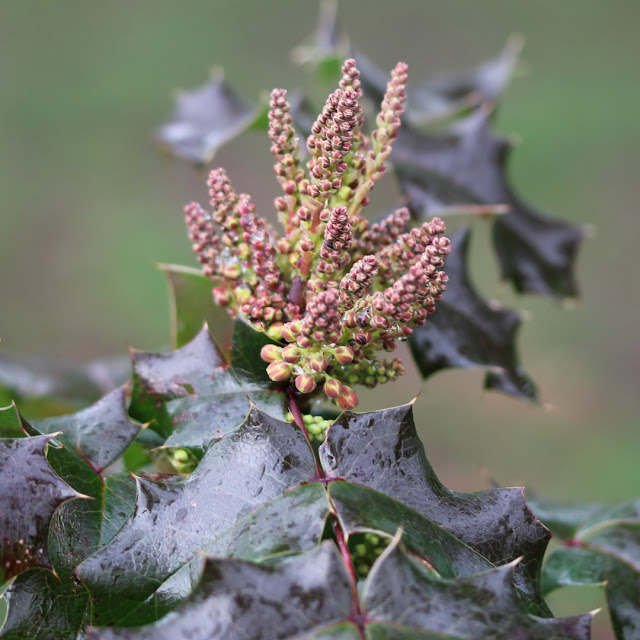 It's so lovely to see the native Oregon grape forming buds. This will be the earliest native plant to bloom here and the hummingbirds and bumble bees will drink its sweet nectar. If you have a small garden, I suggest you stick to early-blooming native plants for pollinators, but if you have more space, then you can squeeze in some winter-blooming non native plants. I think the temptation is to push for those spring flowers that aren't native to the Pacific Northwest because that's how we have been taught that spring should look. However, many spring classics such as daffodils and tulips don't do anything for wildlife here, so to me they really are a waste of space. There are non-native plants that do have some degree of usefulness in winter and early spring. And with climate change, it seems the bumble bee queens may be emerging earlier than ever before, so we may have to cheat and use some exotic plants that produce nectar in late winter.

The winter-blooming varieties of non-native Berberis is prized by overwintering Anna's hummingbirds. It finishes blooming a couple of weeks before our native species of Oregon grape. However, if bees do emerge early because of climate change, perhaps they will also feed on the non-native species. I recommend planting winter heather for early bumble bee queens, even though it's not native. 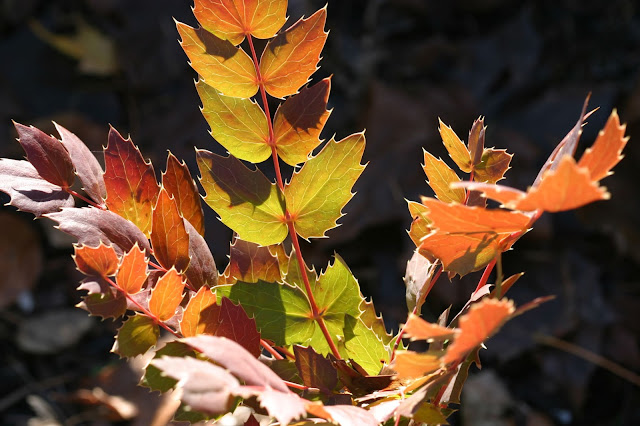 I have been spending quite a bit of time in the community garden in winter to observe, meditate and do my daily exercises. It has been a pleasure to experience the subtle beauty of the garden during this season. In winter, the bees and other insect pollinators are in diapause or they are hibernating. There life cycles are put on hold until it's warm enough to begin developing and foraging again. Many of the plants are resting too, their muted colours blending in with the birds foraging for their seeds. Today I watched the juncos looking for bugs in the leaves under the shrubs. They are well-camouflaged against the leaves, along with the wrens and sparrows. I've noticed that birds love messy gardens because it gives them a safer place to hide and forage, and more food than gardens that are too tidy. 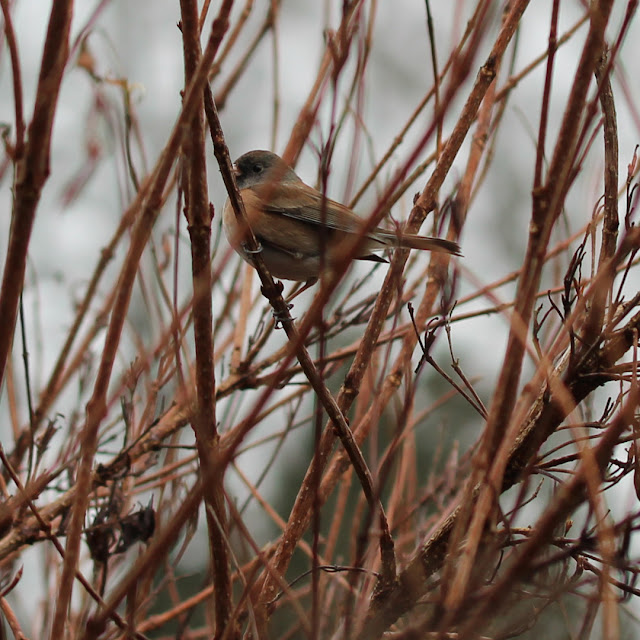 Anna's hummingbirds are now wintering in Vancouver, even though it is not natural for them to do this. Warmer weather, non-native plants and feeders have made it possible. You can usually hear them before you see them, with their high pitched razzes and squeeks. "Zikka zikka zikka!" The males can also make impressive territorial dives that create squeaks with their wing feathers. There are plants you can grow that bloom in winter specifically for them. These are not native plants. 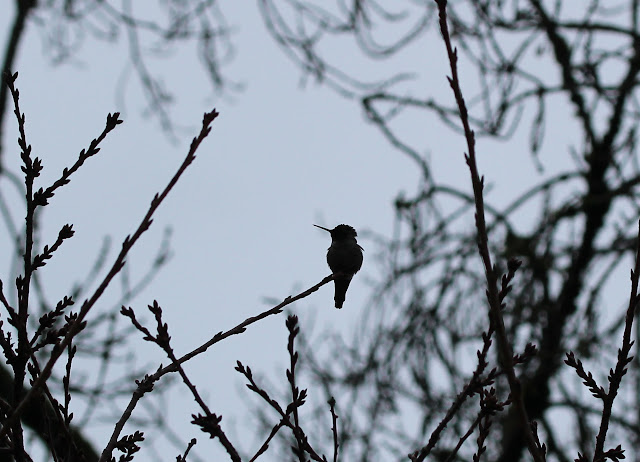 I have never seen hummingbirds forage on sweet box, but other gardeners say they have so I'll have to do more research. It is a fragrant winter-blooming evergreen shrub with dainty flowers. You smell it before you see it and on warmer winter days the scent stops me in my tracks. I've only seen flies on it and not even looking for nectar, but I have seen photographs on honey bees foraging in it. 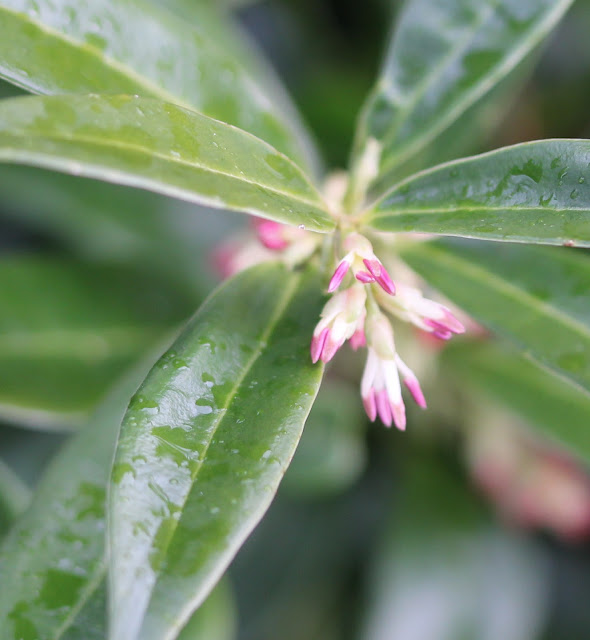 The best bets for hummers are winter blooming jasmine and (as I mentions above) the non-native winter blooming Berberis. Hummers will defend the Berberis with much sound and fury. They become quite territorial. 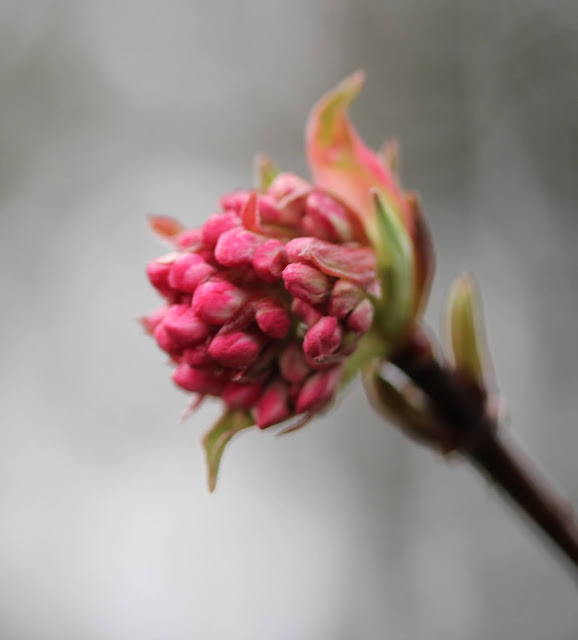 Gardeners say Viburnum x bodnantense 'Dawn' is prized by hummingbird, but again I have not seen them foraging in it. I'll keep on the lookout once the buds open. Winter-blooming honeysuckle will also support hummers. (ETA: I have since found out that at least two gardeners do see bumble bee queens and hummingbirds on this shrub.) 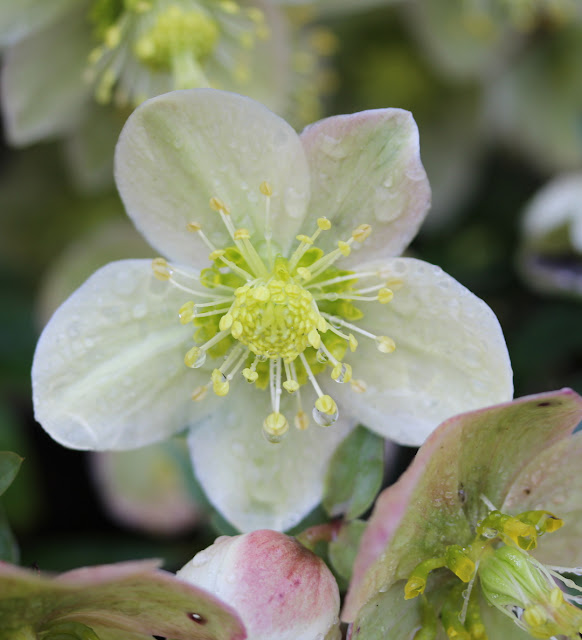 Hellebores are generally cultivated for looks rather than pollen and nectar rewards, so although there do seem to bee some that are visited by European honey bees, most are not useful for pollinators.