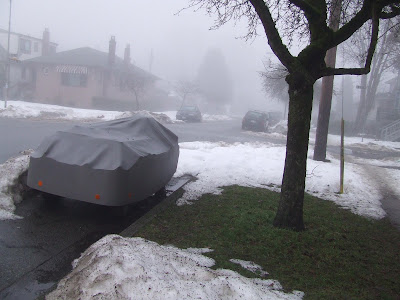 They showed up one day last fall, or was it early winter? Two mysterious "vehicles" parked on either side of Ontario in a residential area. Whenever I walked by them, a question mark popped up like a cartoon in my brain. "WTF?" My first thought was that it was something to do with the movie industry, which often transports large props that make Vancouver a truly surreal city at times. When the cops had a major take down in our neighborhood a couple of months ago. I couldn't help shaking the feeling it was all just a movie shoot.

I thought maybe it was somebody's holiday vehicles, being stored for the winter. The first time I was moved by curiosity to touch one I could swear I thought the covering was soft. "Next time I'll lift it, I thought." When I touched it a second time I was shocked to discover it the draped cover was molded metal. I rapped it with my knuckled and it rang with a hollow "ping." Now I was truly perplexed. "What the hell is it?", the neighbors asked each other. Shrugs all around. I forgot about them once they were covered in snow and then I saw the article in the Georgia Straight. The jig was up. It's a piece of art by Marko Simcic called Park.

So now they sit, through sun and rain and fog, like two adopted undemanding pets. They smugly claim coveted parking spaces. They don't pollute. They don't advertise. They aren't licensed to kill. They are grey. They are benign. They are art.

Currently five degrees Celsius with fog. Well, that's what the website says. The sun is shining full on at our house.
Posted by Beespeaker at 11:58 AM