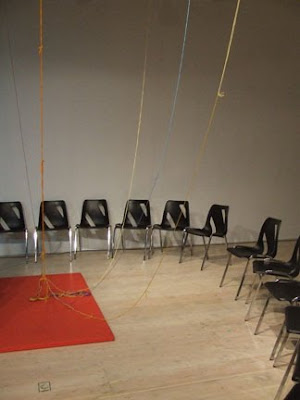 Poshya Kakl - is one of the most progressive young women performance artists currently working in Kurdistan, Iraq. Kakl’s artwork deals with her living reality, and reflects systems of kinship, gender, religion, barriers and borders. Participating across borders and ignoring barriers, Kakl will be working with CHAOS from Iraq via the internet.
Broadcast via Skype (Source: Open Space website)

We had met Poshya via a Skype connection the day before, waving at her and welcoming her to the festival. The image was very blurry but we could tell she looked happy. I overheard Sinead saying that we may or may not be able to contact her at the time the performance was scheduled due to the unexpected power cuts she might experience. (O'Donnell is working to get a new computer for Kakl as hers is getting old and won't wok on a battery.) We were intrigued by the construction of a screen that would allow Sinead O'Donnell to project her skype connection with Poshya Kakl on the ceiling of the gallery. Red judo mats were places on the floor so the audience could lie down and look up at the ceiling. Threads of yarn hung down from the screen touching the floor. 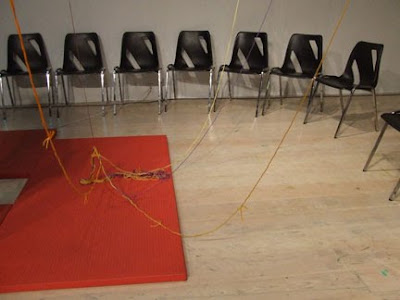 Before the performance one of the curators read a letter the artist sent to the audience. In language that may have been translated by Babel Fish she explained that although we can touch the ground and the walls we cannot touch the gallery. Kakl would love to perform at the Chaos festival in the flesh but she is not allowed to leave her country. So we watch her from a distance in her bedroom in Kurdistan waiting for the audience with her face wrapped in yarn. Some of her family live in Vancouver and came to the gallery to see her perform. We all clapped to welcome them. (One of which was the toddler, the delicate little girl who had been so frightened by the plates crashing down in Sinead O' Donnell's performance.)

The image was extremely pixelated and painterly. There were technical difficulties that took a short while to sort out. As I waited I thought of myself as a younger woman in my small bedroom in a home in the middle of the prairies writing and sketching and creating the performances that would eventually unite me with a whole community of artists. I touched the yarn beside me that led to the ceiling and thought of the innocence of tin can telephones. The artist slowly unwrapped the yarn, revealing her young, pretty face which was still distorted beyond recognition by the veil of technology. It was morning in Kurdistan, so Kakl's day was just beginning as this performance marked the close of the evening's performances. 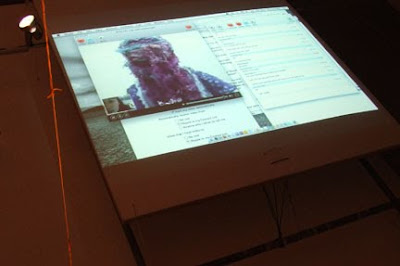 It struck me and my colleague Anakana Scholfield that in this situation the communication becomes a form of art in itself. It fits into the history of communications art, where as Heidi Grundmann points out, artists participating in Art's Birthday during the bombing of Baghdad: “The high-tech attack on Iraq demonstrated dramatically that telecommunications artists operate in the same space as the military to the artists participating in ART's BIRTHDAY 1991.” A recent documentary on CBC radio reminded me that there are still systems in the United States where people trigger bombs by remote control and then go home to hot dogs with their family. (If anyone can remember this reference, please let me know.) The artist who curated Kakl into this show, Sinead O'Donnell is fascinated with the idea of transgressing borders, which is by design a common theme in communications art. O' Donnell has a passion and a gift for linking disparate people in meaningful exchanges. In some cases she performs a proxy of Kakl, wearing a photographic portrait of Kakl over her face, creating a dopelganger of the performer in a performance site. Both artists are linked by their experiences of living in countries torn apart by civil war where crossing borders can be a life and death experience. Connecting Kakl's intimate private space to the public gallery creates a live event that left me hoping that some day I will meet the artist in the flesh and see her performing face to face.
Posted by Beespeaker at 10:15 PM