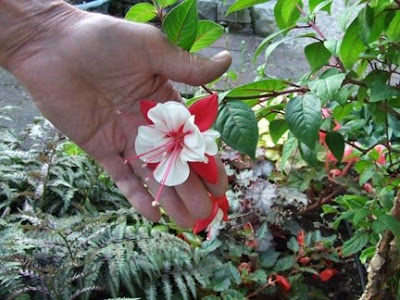 Birding is a much more common hobby than watching bees and the information for bird-watchers is much more diverse than for those of us who spend our spare time counting the stripes on bees. Birders tend to be excellent citizen scientists, and the guide books don't talk down to birders the way that books about insects sometimes do. I think it's time for a paradigm shift, so that more books are written for people who aren't scientists, but really want to get into some depth of information without getting lost in layers of obscure technical terms.

Hummingbirds are fascinating pollinators and a lovely shimmering and sparring addition to a Vancouver garden. You may want to create a bee garden that also attracts hummingbirds. Certainly, bumble bees and hummers are sometimes attracted to the same plants, and if you're a bumblebee, you're no match for those kamikaze nectar seeking birds. They are constantly ravenous, and very highly strung. (I like to think of myself as more of a bumble bee myself.) There are great books that talk about hummingbird gardens. I recommend Hummingbird Gardens: Turning Your Yard Into Hummingbird Heaven from the Brooklyn Garden series. Isn't it wonderful when you plug away for years doing research and then you find a paper that just covers a lot of the bases you were looking for? I just found a great little paper called Hummingbird Flowers of British Columbia(pdf) by Jim Popjar [Syesis:25-28 (1975)] It talks in detail about which native flowers attract hummingbirds.

Popjar defines a hummingbird plant right off the bat:

Hummingbird flowers are defined by Grant and Grant (1968) as flowers adapted primarily for feeding of and pollination by humming-birds. The syndrome of hummingbird pollination in western North America includes several coadaptations. Well-developed hummingbird flowers are usually solitary or loosely clustered, and are borne in a pendant or more or less horizontal position. They frequently have deep-tubular corollas or are otherwise constructed to restrict access to the very abundant nectar. The flowers are usually odourless, and most often coloured a vivid red or orange, or red combined with yellow. Correspondingly, hummingbirds hover while sipping nectar. They have long bills and long, extensible tongues. Hummingbirds have high energetic requirements (Heinrich and Raven, 1972). They do not respond primarily to floral odours, but they do perceive red and orange and recognize red flowers as signals of a high caloric reward. The common colour of hummingbird flowers facilitates quick pollinator recognition but is not conspicuous to insects (except butterflies) that could deplete the nectar supply (Grant, 1966; Faegri and van de Pijl, 1971; Raven 1972).

Bees and humming birds are both attracted to native and cultivated varieties of Monarda. I have seen bees and hummingbirds on abelia flowers, which is a wonderful hedge because of it long blooming period. I recommend an afternoon spent at Van Dusen gardens watching hummingbirds and bees fight over nectar plants and short-tongued bumble bees robbing the nectar of plants with long nectar tubes. Hummingbirds also like clematis flowers, witch hazel twin flowers and fuschias. So when you are planting your garden, think about whether or not you want to plant pollinator-specific plants or plants that attract many different species of pollinators, or both--it's all a grand experiment.
Posted by Beespeaker at 8:31 PM