Is it a Seahorse? 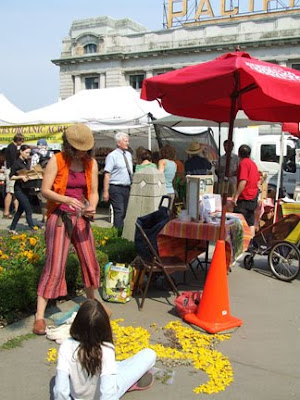 Representing MOPARRC (Means of Production Artists' Raw Resource Collective), I set up a community table at the Terminal Station Farmer's Market this Wednesday. I packed all manner of tricks into my rolling shopping bag, but of course forgot two essential items: my water bottle and my book. Turns out I didn't need a novel because the market provided its own steady stream of inspired wonderment. Turns out everyone and their dog, their baby and their bicycle comes to the market, which means it's become a big hit and it has infused new life into Thornton Park. 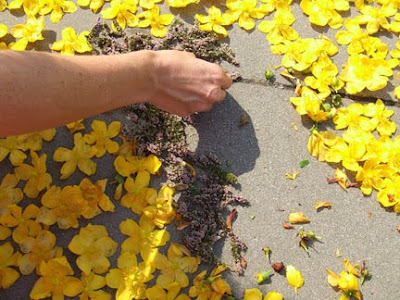 I was adjacent to the mushroom man (oh do you know the mushroom man?), the sprouts man, and the crêpe man, a trifecta of culinary delights. Sharon Kallis came by and created an installation on the sidewalk made of floral ephemera with the help of a ten-year-old artiste. A family of Italian tourists came by and had a lively discussion about what it represented. In the end there were two ideas: a dog or a sea horse. I also heard others who suggested dinosaur, dragon, and the continent of North America. 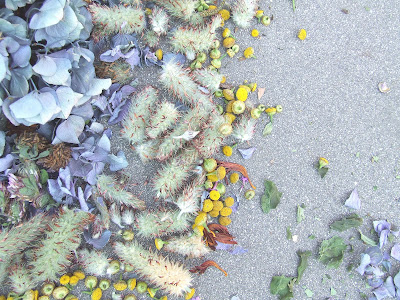 Parents were disappointed I was not the face painter who had appeared at the same table last week, but they were happy that their children could make messages for the bees, and soon became interested in what I was doing. We watched a bumble bee forage for pollen in the yellow blossoms of the ephemeral art piece. I saw several people I knew and invited them to stay awhile and have a chat. A young musician poured his heart into homespun ballads. All afternoon the mushroom man asked people passing by if they like mushrooms. Over and over he handed them paper bags of shitake and oyster mushrooms. I watched his stock get lower and lower as the day went on. A woman confided that the first day he'd worked the market he'd ended up with a lot of mushrooms left over. Now he's ramped up his sales pitch. (He also sells supplies for growing your own mushrooms. The guy just loves mushrooms and tells me to cook them without oil on low heat until they are just glistening. "When mushrooms are glistening, they are done." I do love a glistening mushroom!) The sunflower sprouts guy grows his greens at UBC farm and cycles them to the market. Many of his customers wore cycling helmets as well. I bought and savoured a banana and nutella crêpe. 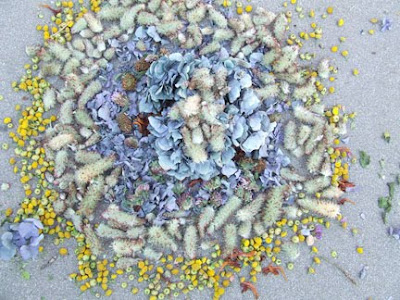 As the sun goes down it paints the park with a soft glow. The train station is bathed in a golden light and the sun sets behind the skyscapers beyond the circle of memorial benches. One man sang his sad drunken songs of despair and a woman slipped silently through shoppers begging for change. "The mushroom man took all my money," my friend says. "He just asked what was left in my pockets and then handed me a bag of mushrooms." He was not taking "not enough money" for an answer. I respected his persistence, passion, and energy. He motioned me over and gave me a free bag of mushrooms and I bought one as well--tender baby shitakes. 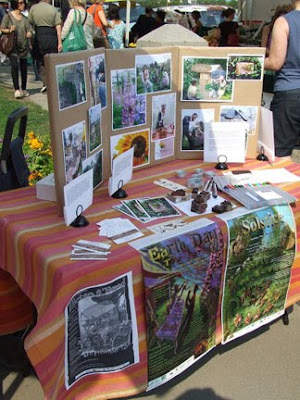 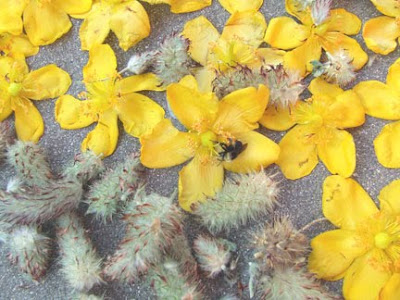 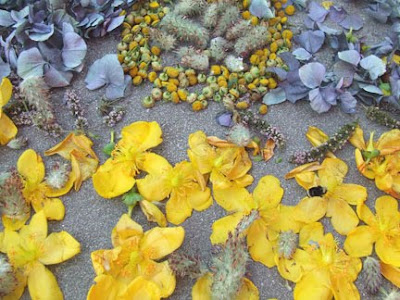 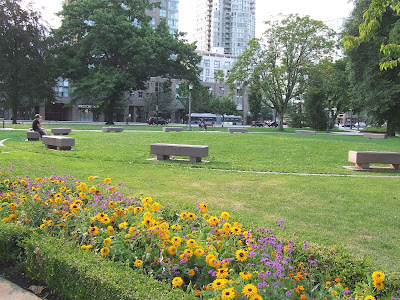 I took a quick tour of the market and bought a bag of cape gooseberries from Klipper's Organic Acres and a chocolate pecan loaf from the Simple Pleasures lady. After a savoury crepe for my dinner, I was of out of cash myself. No sunflower sprouts for our salad. Darn! By the time the market was wrapping up I was sad it was over. A sense of camaraderie had just begun to develop. A couple of people asked if I'd be back next week. I kind of wish I was.
Posted by Beespeaker at 7:51 PM