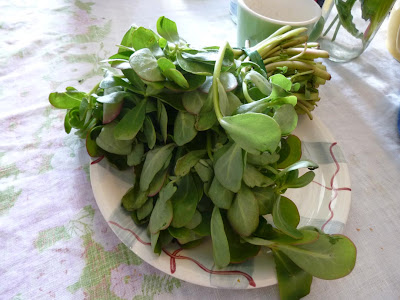 When I was strolling through my mom's garden I pointed down and said, "Oh, you've got purslane. You can eat that, did you know?" My mom looked at me funny and said "That's just Portulaca. We've recently started getting it in our gardens." I didn't realize the Latin name for this weed is indeed Portulaca oleracea, so I did a bit of research. Turns out it is from Mediterranean countries, is an excellent source of Omega 3's and the Greeks saute it and put it in salad. Suddenly I saw purslane in a whole new light. 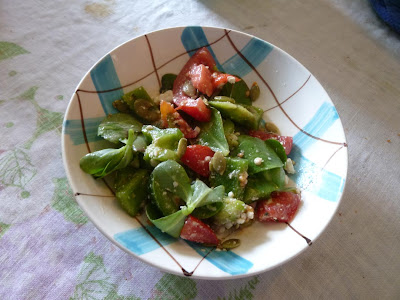 When I volunteered at the market garden at UBC we were always picking purslane out as a weed, whereas the Mayan Gardeners were selling it at their stall. Sure enough, this year UBC Farm has been selling healthy bunches of purslane, so I put it raw in a Greek salad. Apparently the lemony taste comes out depending on how dry it has been and what time of day it is picked. I now throw it in at the end of making a veggie sauté, for those extra vitamins.

I was looking at a bunch of purslane, thinking the texture might lend itself to pickling. Sure enough, the bloggers are on it already as you can see with this great post from Seasons at My House. Furthermore, Shelora (Cooking with a Broad) has been experimenting with purslane this summer to great effect. Have I convinced you yet, mom?

As a footnote to this post, I had a couple of curious women ask me about the purslane that was on top of my shopping bag. I told them what it was and offered a taste. "It's a bit of a weed," I said. "Smells like a weed," one woman said. "Yeah well, you know how it is," the other offered, "Some people smoke their weeds and some people eat 'em."
Posted by Beespeaker at 4:58 PM