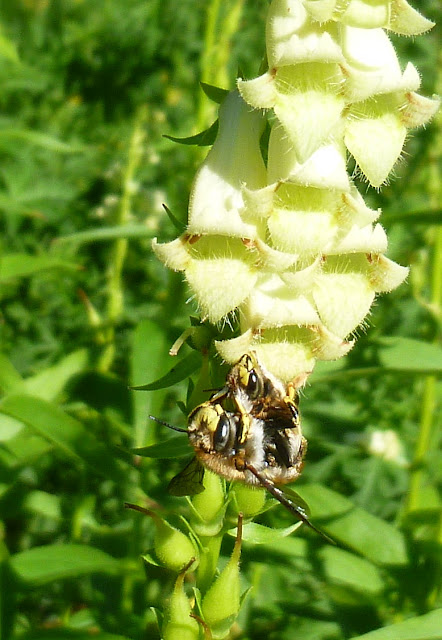 Last year I did a series of posts about wooly carder bees and this year I am seeing a lot of them out and about on my bee safaris. The two plants that seem to attract them are culinary sage and Wooly Lamb's Ear. They are not native to B.C., so the question arises as to whether or not we should encourage growth in their population. The males are very aggressive, knocking other bees out of "their" plants. You can see in this photograph of carder bees mating, how much larger the male is than the female. Yikes! The female was trying to forage in this blossom and the male flew onto her back. She just held on and waited until he finished his job and then went on doing her job.

I observed them yesterday at VanDusen Gardens and I saw many other species of bees around the planting they were protecting. Everything seemed to be working out okay, considering honeybees are also incomers and there are several hives in the gardens. However, I think further study of this issue is warranted. I would actually remove the Stachys plants from this area because there are a lot of native plants nearby and my instinct is to protect this delicate ecosytem that is so great for the native bees. 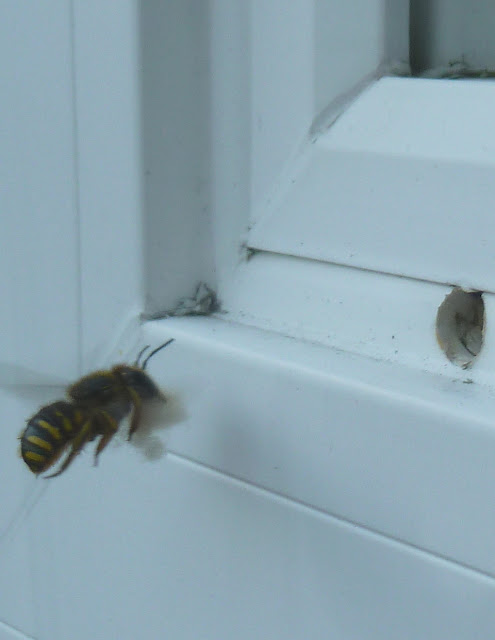 Coincidently, as we were sitting at dinner last night at my relative's place in Delta,  Dave asked me what kind of bee was going in the hole in his window ledge. At first I thought it was a small wasp, but then, to my surprise I saw it was a wooly carder bee carrying a big piece of fluff. She was having a heck of a time fitting it into the hole. I tried to help her by allowing her to rest on my palm so she could push it in, but that just seemed to confuse her. 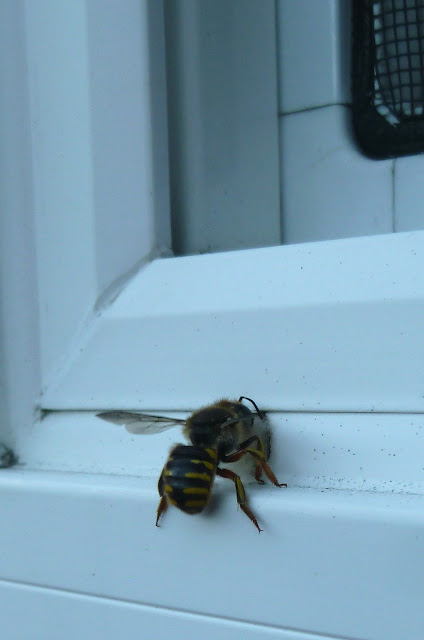 The ledge was a bit slippery, and so you can see how she had trouble. Think how big this load is relative to her body size. You can see how I would confuse her with a wasp because the hairy part of her body is actually underneath her abdomen, but she's still got more hair than a wasp on her head and thorax.

The flower at the top of the post is a mystery to me, so if anyone can help identify it, I'd be much obliged.
Posted by Beespeaker at 1:57 PM