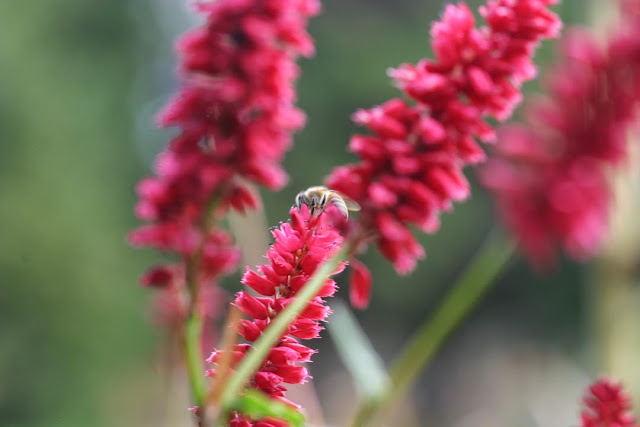 When there's a warm day in November, there's not much for honeybees to choose from for forage, so when I visited VanDusen this week I was pleased to see there was some red bistort aka Persicaria for those bees who ventured outside the hive. 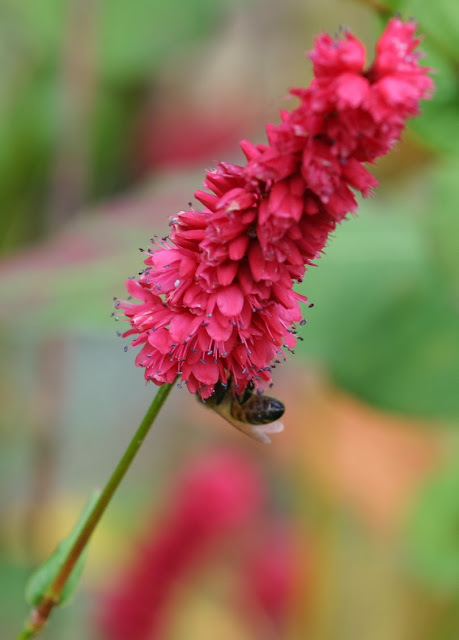 Being red, it breaks the rules for bee plant colour, but you can see those purple anthers on the stamens. I wonder if they help attract the bee to the plant. Certainly when it's this cold, there is not fragrance I could detect. 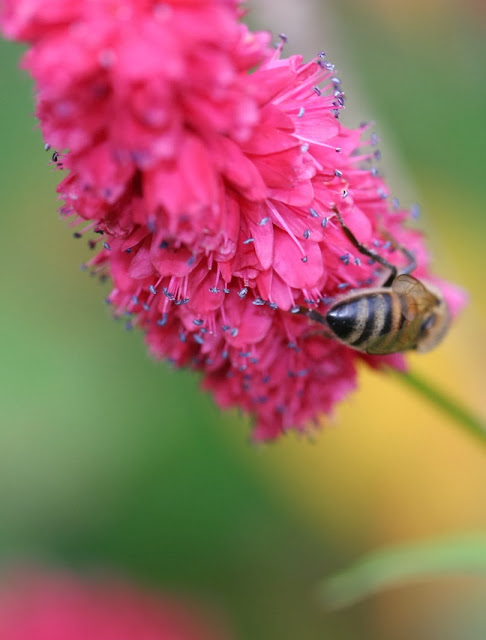 Not all the florets on the inflorescence bloom at once. You can see how they are blooming at different stages, moving from the bottom towards the top. This is a good strategy for the plant to extend blossom time to hedge its bets on being pollinated. 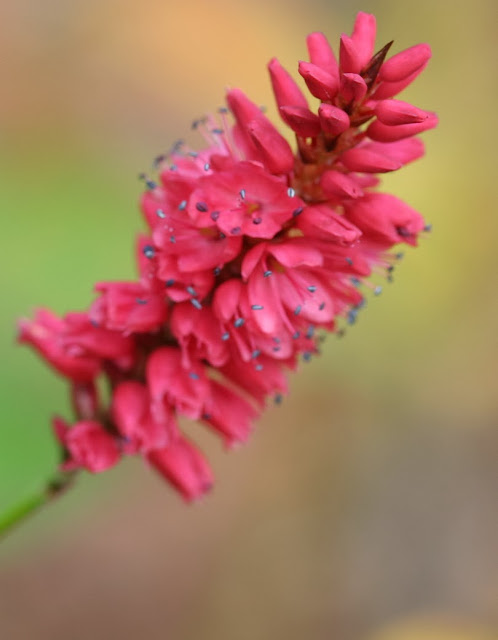 Bistort is from the Polygonaceae or buckwheat family,  which contains an important collection of bee plants. You can see the tiny white grains of pollen, but it's the nectar that's attracting the bees to this plant. 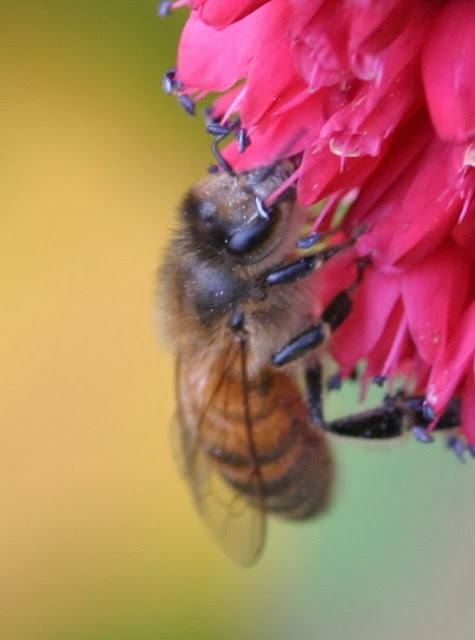 What we in British Columbia call Smart Weed (more polite than smart arse) is Polygonum persicarium also known as lady's-thumb. Persicaria comes from the Latin word for "peach" because of the similarity of its leaves to those from the peach tree. The "knobby knees" of Polygonum refers to its jointed stems. Smartweed competes with food crops and can cause yield losses and harvesting delays. It thrives in moist, shady conditions and I am very familiar with it, having spend hours on UBC Farm weeding it out of the veggie rows. At the time I didn't realize it was edible and medicinal. Foragers use smart weed sparingly to lend hot pepper flavor to soups.


The common name bistort rhymes with distort, the "tort "meaning twisted, referring to the roots. There are wild bistorts and cultivars from all over the globe, some of which are great bee plants for gardens. You may be most familiar with the classic border perennials like Persicaria bistoria 'Superba' with its light pink blossoms on long stems aka pink pokers. The red cultivars are also popular, and although they break the rules for bee plant colours, on late fall days they attract honeybees when not much else is in bloom.

Bistort is a boggy member of the knotweed family. As I was taking these photos, my feet were squelching in the wet grass around the dried flower garden at VanDusen. Persicaria amplexicaulis 'Firetail' aka red bistort is a long-blooming (midsummer to late autumn) plant which grows just over a metre tall. There are dwarf versions as well, but I can't vouch if they attract bees as well as this cultivar. It's a shade tolerant plant which can tolerate different soils, including clay, but it does prefer wet feet.

An infusion of bistort was believed to drive out evil spirits. Witchipedia's list of alternative names for P. bistorta names reads like a spell from Hogwart's including Osterick, Snakeroot, Easter Mangiant, Adderwort, Twice Writhen, Pudding grass, Serpentaria, Dracunculus, Serpentary Dragonwort, Patience dock, Red Legs, and Dragon’s Scales. The roots have been soaked in water and boiled to eat as famine food in Europe and the seeds were used as chicken feed. Young leaves and shoots were cooked in Bistort Herb Pudding aka Easter-mangiant. It is is a boil-in-a-bag dish made of simple ingredients including oatmeal, barley, and hedgerow herbs such as sweet cicely, nettles, black current leaves, and yellow dock. Bistort pudding was traditionally prepared in May when other vegetables were few and far between. This dish is still eaten in parts of northern England (Cumberland). According to the authors of Seaweed and Eat It Easter mangiant was a fertility pudding, eaten at the end of lent when women wanted to conceive.

Brazilian scientists studied Polygonum punctatum and isolated the sesquiterpene dialdehyde polygodial as the active chemical constituent which along with tannin gives the plant its antibiotic, anti-flammatory and anti-hyperalgesic qualities. Plants from this genus have been used as astringent gargles and wound washes. Caution is warranted in the ingestion of bistort because of its high tannin content which can cause nausea and liver toxicity.


American bistort (Polygonum bistortoides) has a white flower head and is very attractive in a meadow. The roots were eaten raw or roasted in the fire by Rocky Mountain tribes, with a flavor that has been compared to chestnuts. I would like to try to grow it in my back yard, but the seeds are hard to find and difficult to germinate.

Feral smartweeds have historically been a major honey plant in the U. S. and Canada. In the book Plants for Bees by Kirk and Howes the authors say that although not a favoured honey plant in Britain, in other countries Persicarias produce a dark, spicy honey that is quick to crystallize. They suggest that the aquatic Persicaria ( P. amphibria) may be a good source of nectar to plant around pods and wet wastelands.

For a great blog post on Persicaria cultivars check out this article by Jan Verschoor. 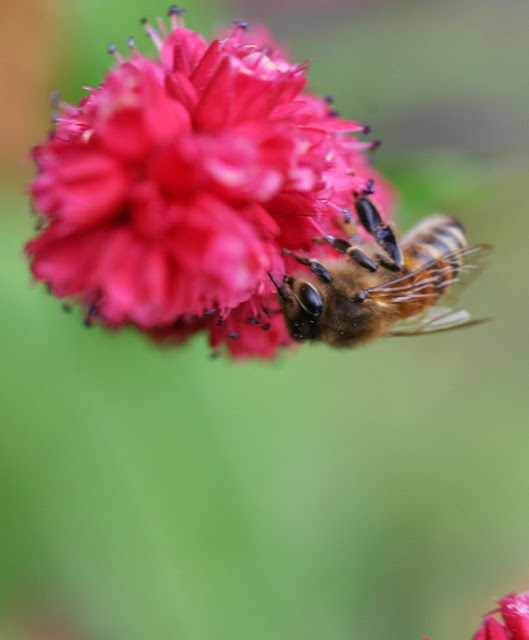 Posted by Beespeaker at 1:28 PM