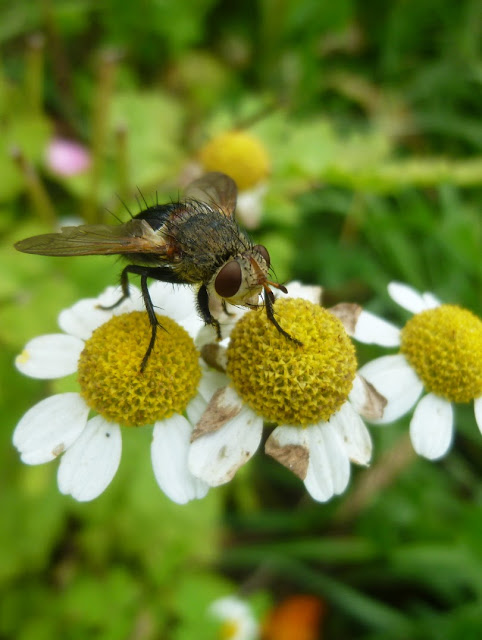 Visiting Dan Jason's farm this summer has been a highlight of my summer. I was always intrigued by his comment in the documentary film Gardens of Destiny* when he said he didn't need to practise pest control in his garden because there was a critical mass of biodiversity so that the pests took care of themselves. I asked Dan if he had a problem building up to this critical mass of plant diversity since he'd moved to a new farm only a few years ago, but he said that because he had the seeds and the plants to make it happen very quickly, he hasn't had pest problems. I pondered this as I looked through a big book of pests that will destroy your garden and how to deal with them at a Book Store in Ganges on Saltspring. I shudder when I page through those books as if even looking at them will jinx me and one of these villains will fly off the pages right into my garden. Dan Jason doesn't need one of those books. 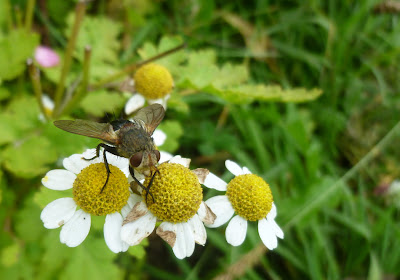 Perhaps it is no surprise that one of the insects elbowing in at the nectar buffet circuit on Dan Jason's farm was a tachinid fly, most likely a Tachina algens wiedemann. I have noticed this fly once before and I never forgot it. I was watching an insect on an orange buddleia bush, which is in itself a weird plant to encounter in my neighbourhood, with its bright orange pin-pong sized infloresecences. It was generally shaped like a bee, especially the apple-seed shaped head, but it definitely had the back end of a fly. The head was grey like one of those skinny little aliens from Close Encounters of the Third Kind. The eyes did not quite match bulging eyes of a typical fly and it was calmly sipping nectar as my mind boggled over its identification. I was spooked. Then I went and looked it up on the web and found it was probably a tachinid fly. I have been telling this story ever since and it makes people's eyes glaze over with boredom. However, if I have not lost you yet, dear reader, this is some fascinatin' diptera.

Tachinid flies have been imported from the countries of origin as a biological pest control to parasitize invasive caterpillars that were unwittingly transported to North America. They attack cutworms. What's not to like? This article from Mother Earth News calls tachinid flies "the party guest from hell" because they kill their hosts but I think that's being a bit harsh, a bit too much like a trailer from Friday the 13th. It's more of a Midsommer Mystery kind of fly, or even a Lewis Carol invention, especially when photographed from certain angles. It looks like an old illustration out of a children's fairy tale book where bees have velvet waistcoats and tachinid flies wear top hats. 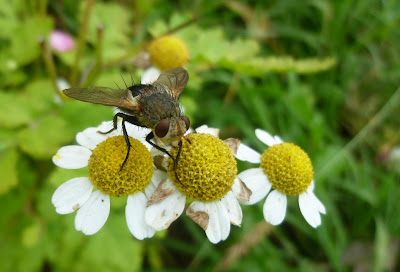 And so a tachinid fly becomes a symbol of one of the insects that make it possible to grow a garden without pesticides. But here's the thing, this particular contract killer doesn't have a common name. We've got to make one up! Should we name it a Jason fly, with a nod to Dan Jason, but also an echo of Friday the 13th? Send me your suggestions!

This fly feeds from nectar on asters and goldenrod, but I also saw in on Ammi visnaga, and of course here on this feverfew. This photograph is actually taken at the Salt Spring Centre for Yoga where Dan Jason used to have his garden. He left a few beneficial insects behind.

Many thanks to Mr. Dave Ingram for his post and photographs which helped my identify this fly. We need a British Columbian entomologist like Bug Eric to help us out with these insect ID's. Come on folks, who will be the lucky one to be pestered by us amateur insect watchers? Any volunteers?

*Gardens of Destiny is a film by Jocelyn Demers about Dan Jason's seed saving work that you can purchase on the Salt Spring Seeds website.
Posted by Beespeaker at 3:24 PM