The Best Way to Grow Tomatoes: With a Hummingbird Helper 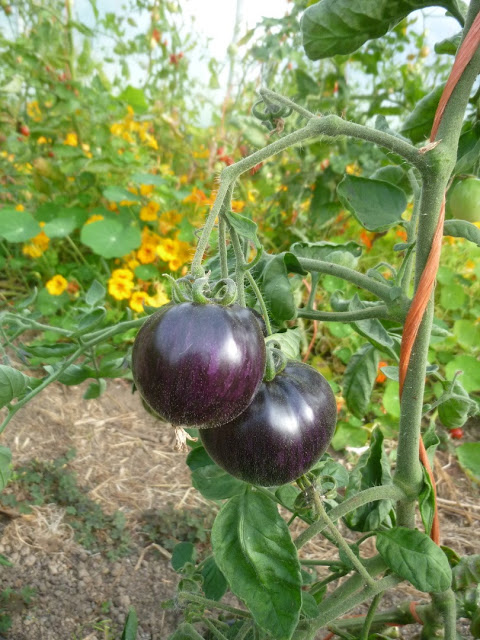 "You should make some fried green tomatoes," Catherine suggests as I'm leaving her house. "Grab some tomatoes in the greenhouse, dip them in egg, then cornmeal and fry them. I like mine with soya sauce for dipping." So I took her up on her generous offer. After all, the rains have started here in Vancouver so we are under pressure to start picking tomatoes before early blight sets in. The recipe sounds simple enough, so I don't even do a Google search for the details. I just buy the organic cornmeal and do it. First off, I didn't know how thick to slice the tomatoes, second, which way to slice them and third, I didn't know how much oil to put in the pan. So I tried thicker and thinner slices, one tomato sliced across the width, the other vertically. Peter sampled a bite and shrugged. He always does this when he's not impressed with something. It happens involuntarily and I can pick up even the most subtle of shrugs. It's his "tell". I wasn't too convinced either. The tomatoes seemed tough and the cornmeal didn't feel cooked. I chalk it up as one of my culinary failures.

Later that evening I do my research. It seems there needs to be milk in the batter and at least a half an inch of oil in the pan. So I will give it another try on a later date. In the meantime I heated a couple of leftover slices in the oven this morning and piled smoked salmon on top with tsatskiki, onions and capers. It was delicious. The fried green tomatoes make a good bread substitute. I can imagine making grilled cheese sandwiches this way. 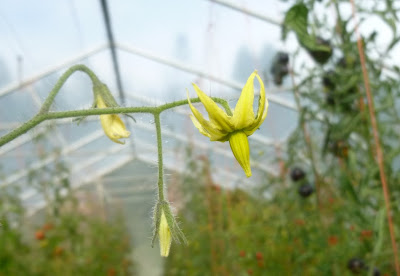 Did you know that bumblebees pollinate tomatoes? Tomatoes are new world crops that didn't evolve with honeybees. Our new world bumblebees have the ability to shake the pollen out of the stamen like a salt or pepper shaker. People who have enclosed greenhouses have to hand pollinate the flowers with vibrators, which must feel pretty silly. Then farmers got the bright idea to farm bumblebees, placing artificial nests in the greenhouses. This may have seemed like a good idea at the time, but they imported eastern bumblebees to western Canada. These bumblebees not only got sick, but many escaped and started bullying the indigenous western bumble bees out of their nests. 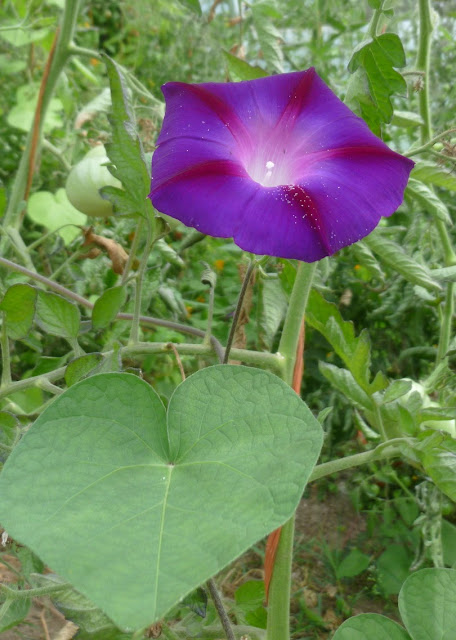 There are two families of plants that benefit from buzz pollination. The first is the nightshade family (Solanaceae) which includes tomatoes, eggplant, ground cherries, chile peppers, potatoes, chayote, and goji berries (Lycium barbarum). The second family is the heather family (Ericaceae), including red huckleberry (Vaccinium parvifolium), cranberries and blueberries. Bumblebees are better pollinators than honeybees for watermelon and cucumber, although there are squash bees that evolved to pollinator the cucurbits. They are about the size of honeybees and the males have an endearing habit of bedding down in small groups inside pumpkin flowers. 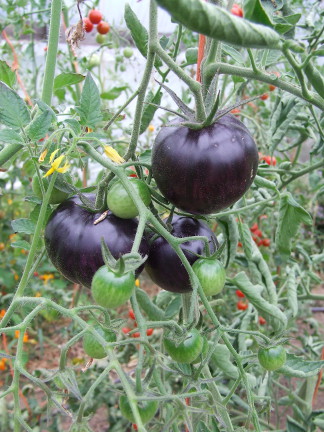 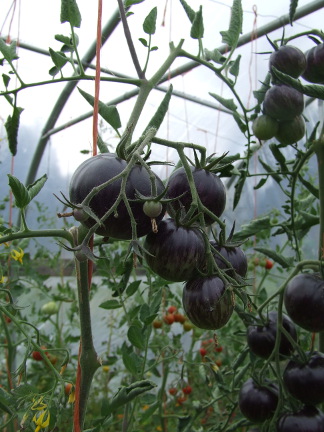 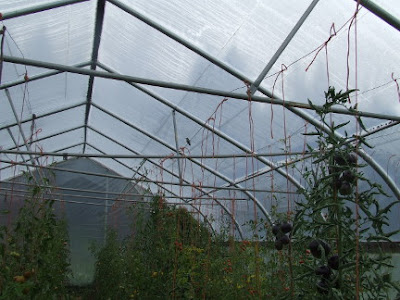 At the Saltspring Centre for Yoga there is a greenhouse hosting a wide range of colours and shapes of tomatoes. The door is wide open so that bumblebees can come in and shake the stamens. Furthermore, there is a resident hummingbird that perches on the wires suspending the tomato vines. She eats up all the tiny bugs that would otherwise be munching on the tomatoes. The back of the greenhouse is planted with hummingbird flowers: nasturtiums and beautiful purple morning glories that twine up among the tomato vines and will provide extra nectar for the bumblebees once the tomatoes have finished flowering. Surely this is one of the best ways to grow tomatoes in a northern climate. I have read in gardening forums that hummers will sometimes perch on tomato cages, so I bought a bright red one to put in my raised bed even when I'm not growing tomatoes. 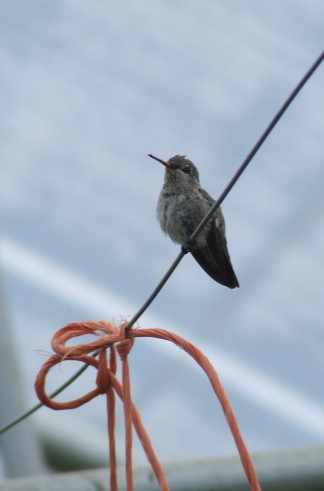 Ever since I heard the story of bumble bees and greenhouses, I have been intrigued by the question: what is the best way to grow tomatoes here in British Columbia? Tomatoes are tricky here because we tend not to get enough dry sunny weather for them. Sustained late summer rains often means the tomatoes get blight, which means you've got to toss everything out and it's risky to grow tomatoes in that soil again. They are the most high-maintenance veggie I'm willing to grow in pots in our back yard and this year I didn't plant any because I knew I'd be too busy to attend to their needs. 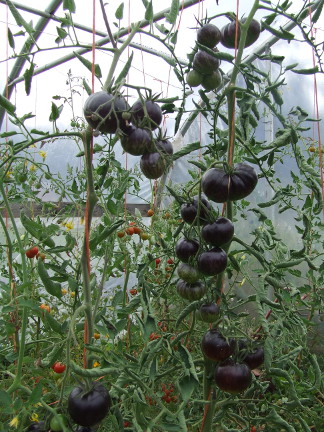 Yesterday my friend Lori made me a salad with tomatoes, cukes, feta and olives. Having forgotten spoons we ate the ripe tomatoes with our fingers on a picnic table at UBC Farm. At least I know the best ways to eat tomatoes. 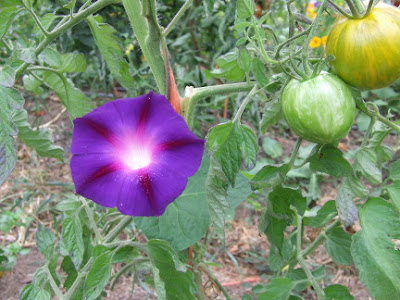 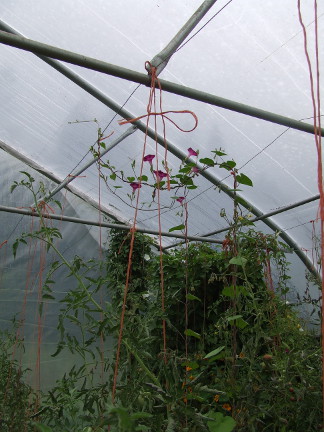 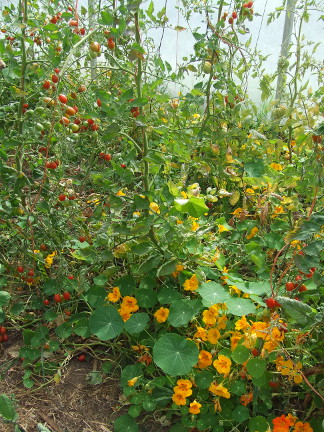 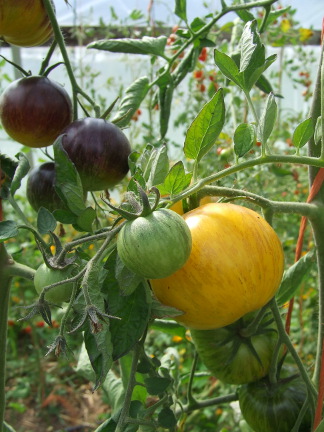 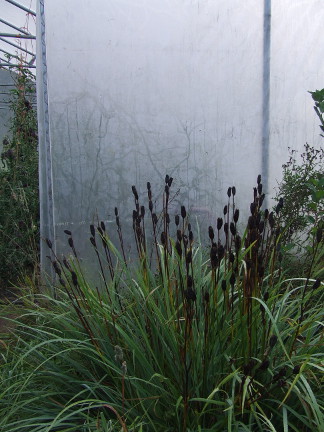 Links for more information about the problems of using commercially raised bumble bees in greenhouses:

http://www.plosone.org/article/info%3Adoi%2F10.1371%2Fjournal.pone.0002771
http://www.ballpublishing.com/insidegrower/CurrentNewsletter.aspx
Posted by Beespeaker at 8:45 AM