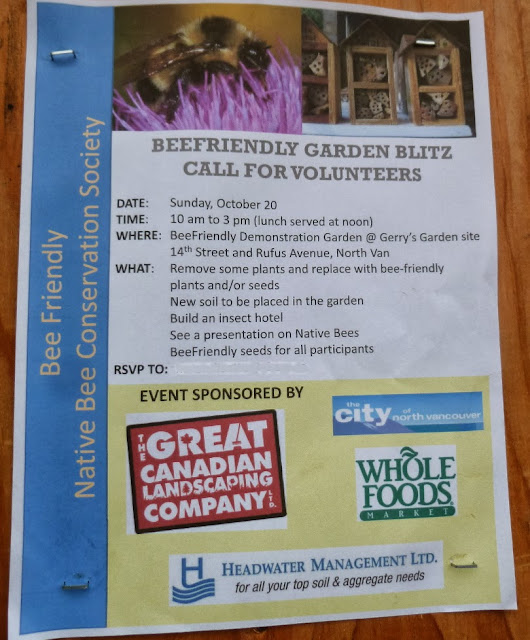 Maybe the weekend before Halloween should be declared the official bee garden planting time of the year.  In Vancouver it's good to get some of the larger perennials moved and new trees and bushes in the ground before the rains some. This gives some plants a chance to establish themselves with a good supply of rainwater before the summer dry period comes next year. When I saw this poster at the Homesteader Emporium I was really excited to take part in this project and meet the BeeFriendly folks in North Vancouver. 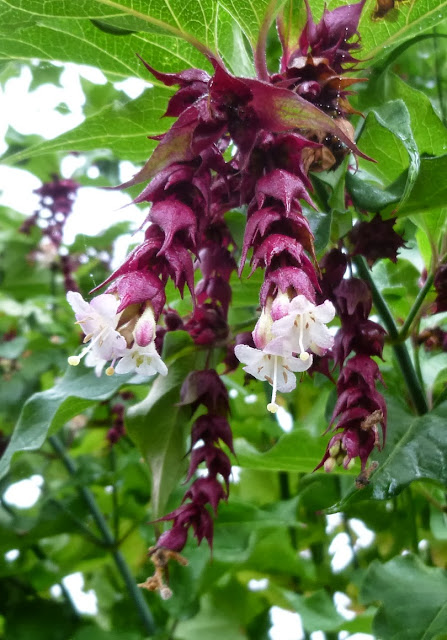 It wasn't too difficult to get to the garden using public transit. You can catch the number 240 bus to North Vancouver across from the City Center sky train station which takes you within twenty minutes of Loutet Farm. The farm is a collaboration among the North Shore Neighborhood House, The City of North Vancouver and UBC Farm. The community partners transformed a strip of land that borders a soccer field in Loutet Park and turned it into a micro farm that sells vegetables to the local community at Wednesday and Saturday markets. The farm houses two beehives in sturdy bear-proof cages and is bordered by a busy path used by dog-walkers, joggers, and horsey folk. 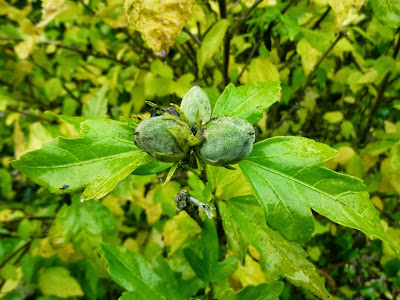 On the other side of that public path is a gem of a garden named after its gentle gardener, Jerry MacPherson. I am early for the work party, but Jerry is already busy working in the garden. He is a quietly spoken sweet soul, and he's very excited about what we'll be doing in the garden. There is a diversity of plants packed into a small space and within five minutes of visiting the garden a male Anna's hummingbird lands on a branch in front of me to check out the interloper in what he clearly considers as his space. 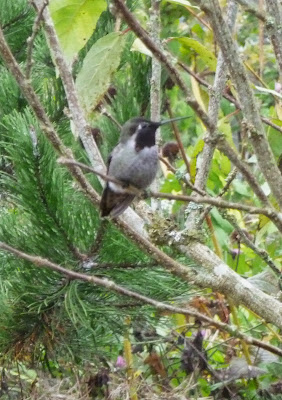 There are quite a few hummingbird plants in this garden, some of which are still blooming: honeysuckle, crocosmia, monarda hardy fuschia and Lobelia cardinalis. Other plants include Agastache foeniculum, lavender, thyme, oregano, Persicaria amplexicaulis (red bistort), and Persicaria bistorta, (pudding dock). There are hazelnut bushes, Japanese anenomes, ox-eye daisies, hydrangeas and rose bushes cranesbill geranium, day lilies, iris, and more. 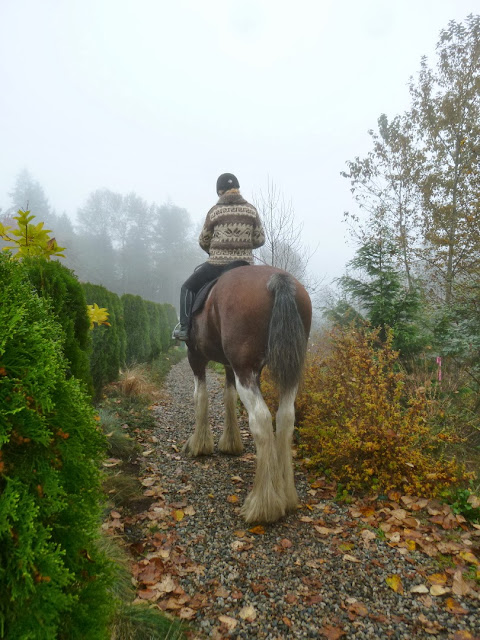 Over thirty volunteers arrive to help out in the garden including a gardener from as far away as Hornby Island. There are community gardeners from North Vancouver and employers and employees from The Great Canadian Landscaping Company which is one of the proud sponsors of this project. 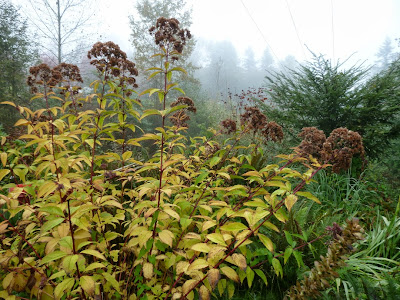 We start by cleaning up the south side of the garden and prepare the ground to receive new soil. Everyone just mucks in a finds a job that suits their ability and energy level. "It's like the ground is moving!" Jerry exclaims as we dig and clip and cart wheelbarrows of green waste into the compost pile. The volunteers accomplish what could have been 6 weeks worth of work in the course of a few hours. 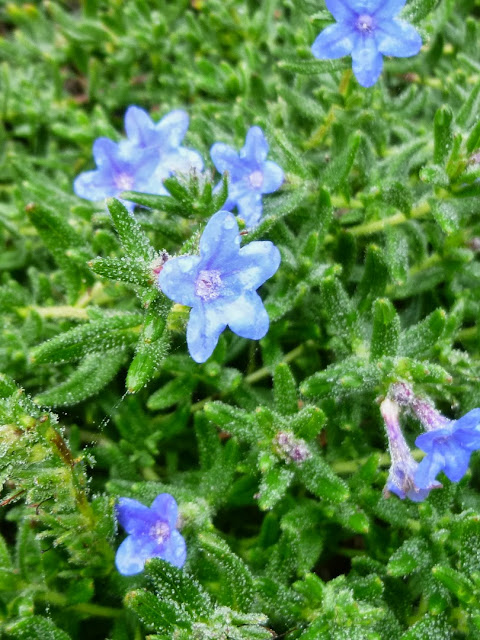 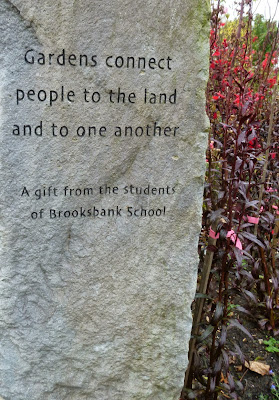 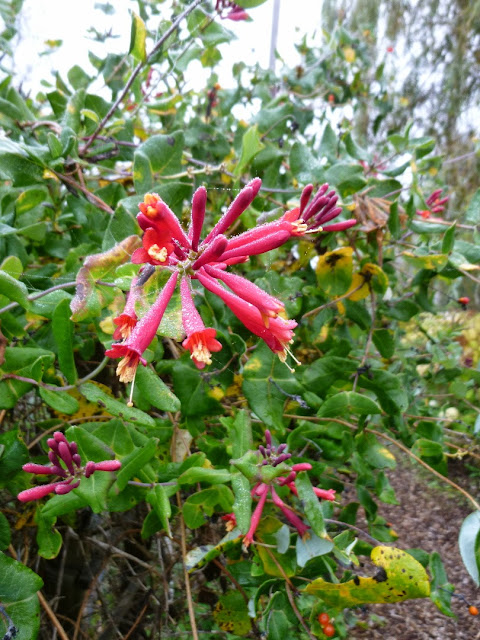 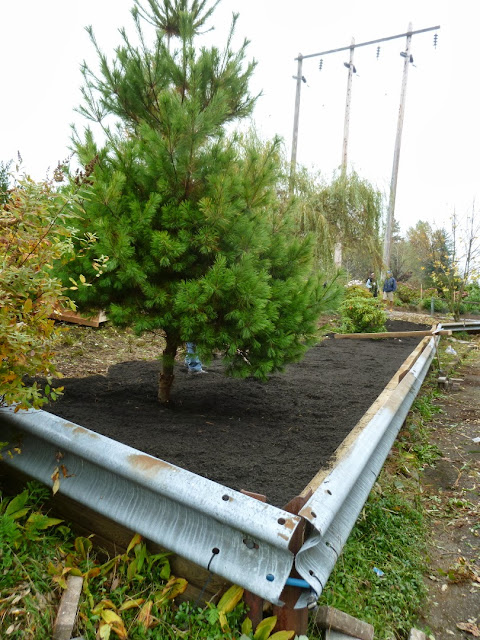 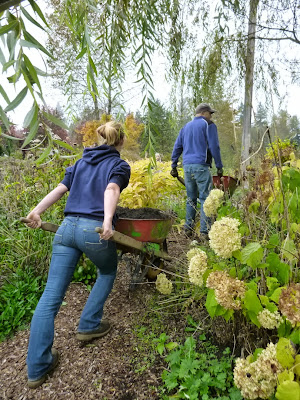 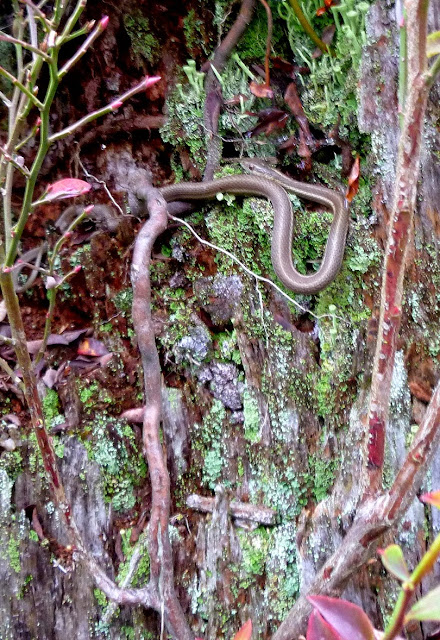 One of the young student helping us out finds this little garter snake we have flushed out from his hibernating spot. "He's so small I thought he was a worm," he says. 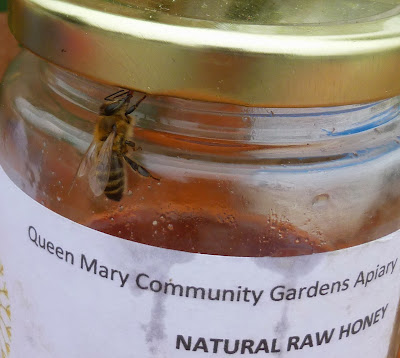 During the delicious lunch provided by whole Foods, a honeybee tries to steal back some of her precious honey. She is determined to clean every speck of it off the outside of this jar. 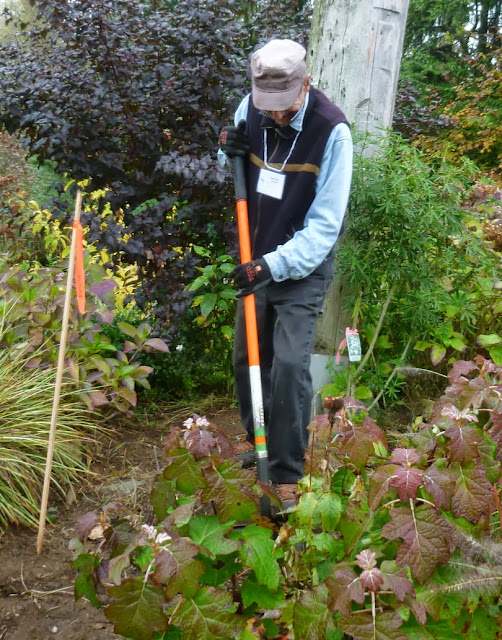 Jerry is a tireless worker. I didn't see him sit down once, not even for lunch. 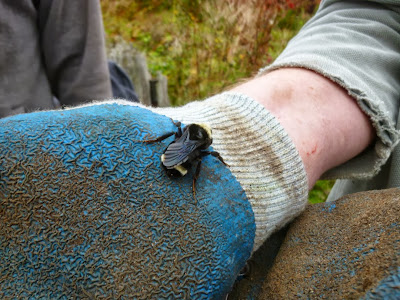 We also uncover a queen Vosnesenskii. "We're almost done the hotel, and then you'll have a new place to stay," one volunteer says. 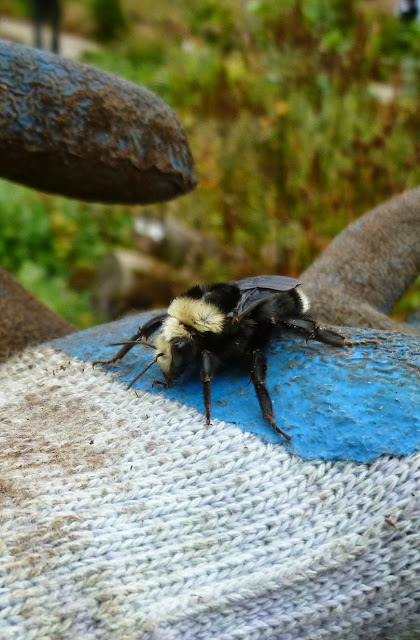 The attic of the hotel will be filled with the kind of soft insulation that bumble bees need for their nests. Although primarily ground nesters, using abandoned rodent nests, they occasionally snuggle in to bird houses and insulation in (human) houses. 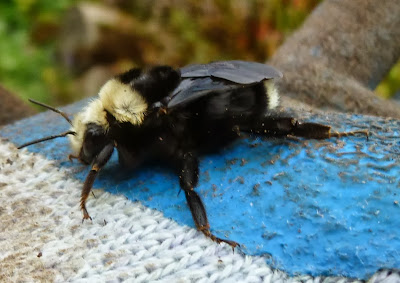 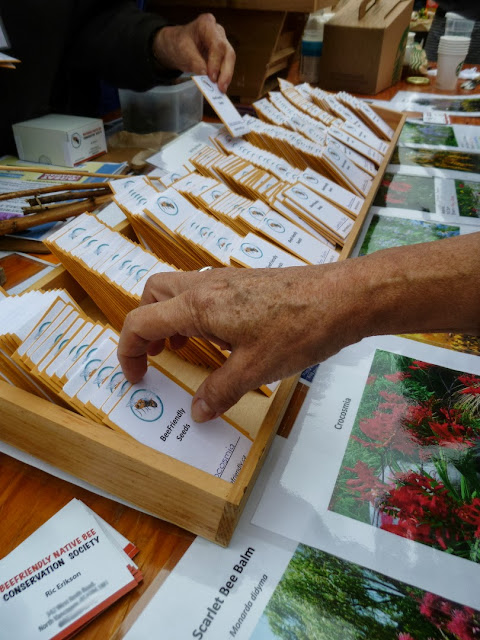 Ric has package up several seeds from Gerry's garden which we are invited to choose from to plant in  our own gardens. The seeds Ric collected in the Gerry's Garden are Joe Pye weed, Jacob's ladder, lupin, Crocosmia, corn poppies, Delphinium, Monarda didyma, wooly lamb's ear, and foxglove. I picked up some Monarda didyma seeds because it supports bees and hummingbirds and makes delicious tea. People walking the path are drawn in by Ric's bee demo table. They get really excited about the bee garden seeds and the insect hotel. 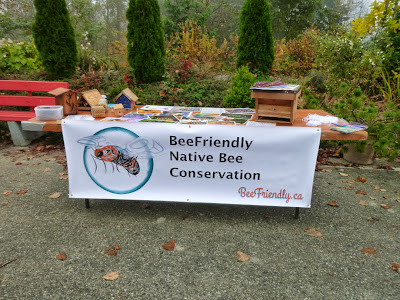 After lunch Ric from BeeFriendly gives an excellent talk on native bees. A former construction worker, he has taken up the cause of protecting and supporting native bees, along with the frogs and snakes he remembers from his childhood. He warns us not to purchase mason bee cocoons because they can be infested with pollen mites. It's better to find cocoons from a local mason beekeeper. He talks about the tragic loss of the Western Bumble bee due to the importation of disease-ridden non-native bumblebees by the greenhouse industry. He also talked about the importance of lupins as an early source of nectar and pollen for the queen bee to raise her first batch of brood in the spring. 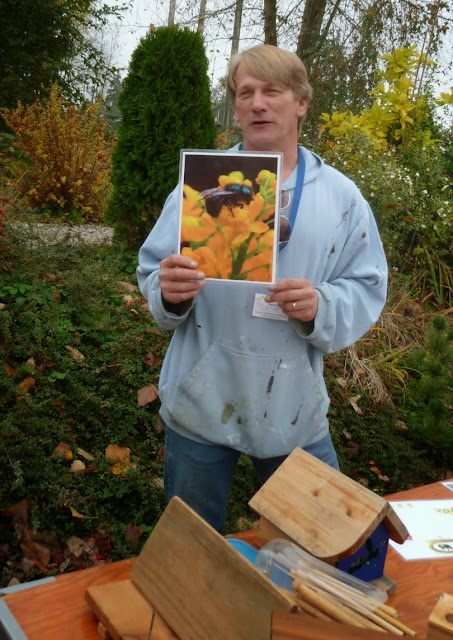 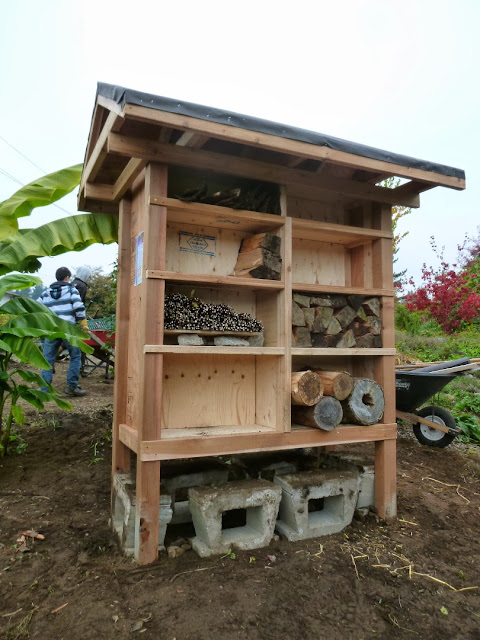 The piece de resistance is this sturdy insect hotel which is placed on the site and anchored in concrete. It will be filled with bark, straw and other plant stems, as well as logs drilled with holes of varying diameters for a wide range of bees and beneficial wasps. There's a snake habitat under the insect hotel. As long as it's not a spider hotel, one gardener says. I am freaked out by the brown recluse spider. They do nasty things to your skin. (Maybe he should read this post by BugEric.) 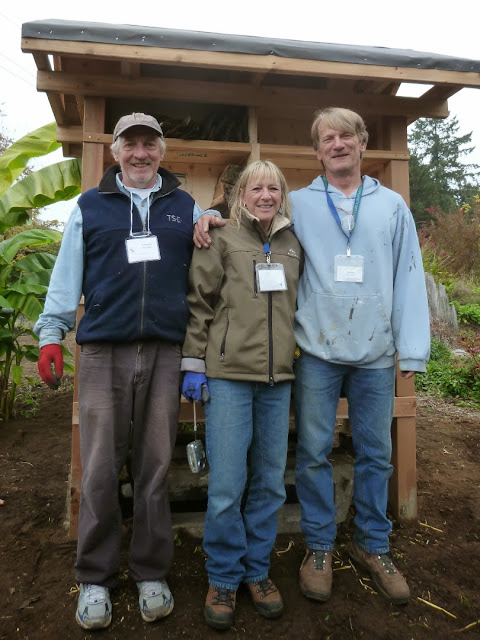 Many thanks to our fearless and BeeFriendly leaders: Joseph, Sharon and Ric.
Posted by Beespeaker at 9:17 PM