Bees in a Field of Phacelia: The Sharing Farm Hosts a Bumblebee Party 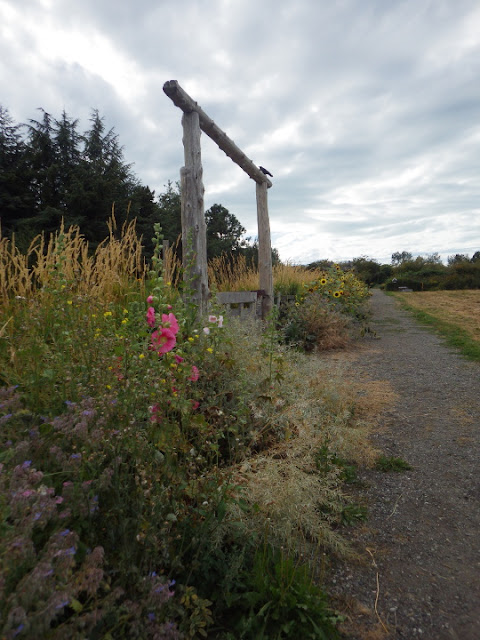 It's great to see a concerted effort to plant bee forage at The Sharing Farm in Terra Nova Park. 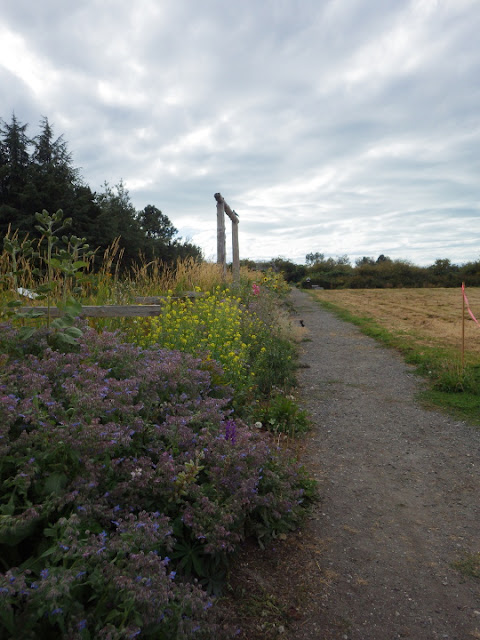 As you can see here, there is borage, mustard and sunflowers all along this fence, and the honeybees and bumblebees are loving it. 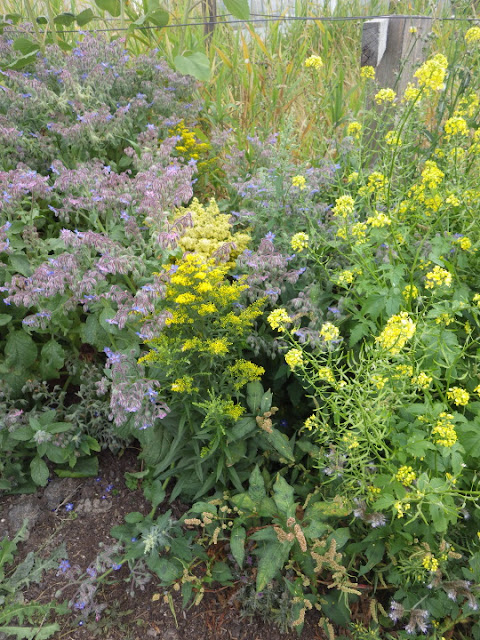 This is a lovely trio: borage, goldenrod and mustard. I spotted some lupins in here too. 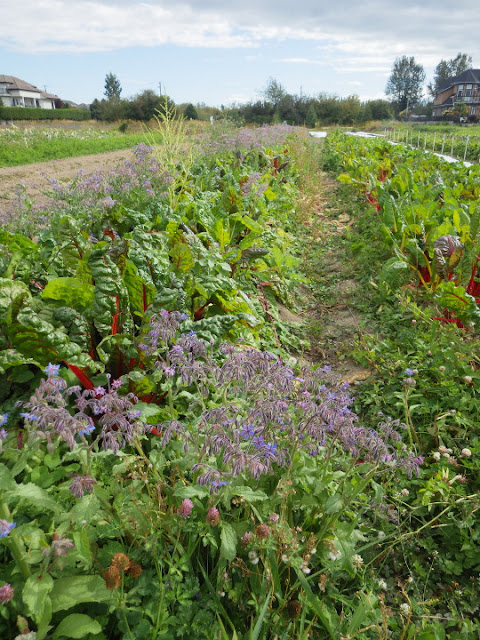 You can also see a row of borage here and lots of clover interplanted with this Swiss chard. 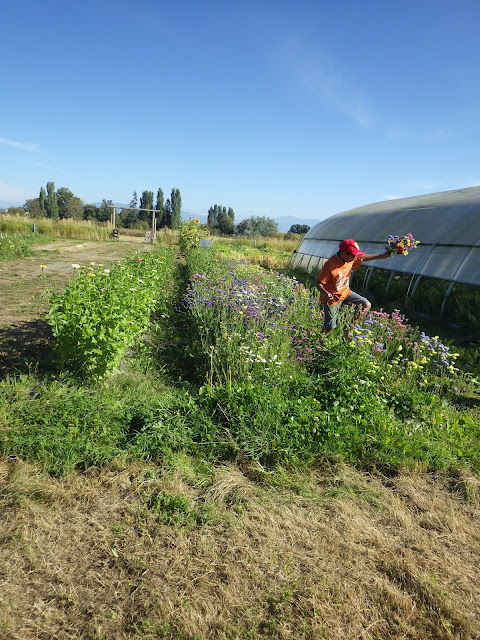 Even some of the everlasting flowers grown for the garlic braids will provide some food for bees. 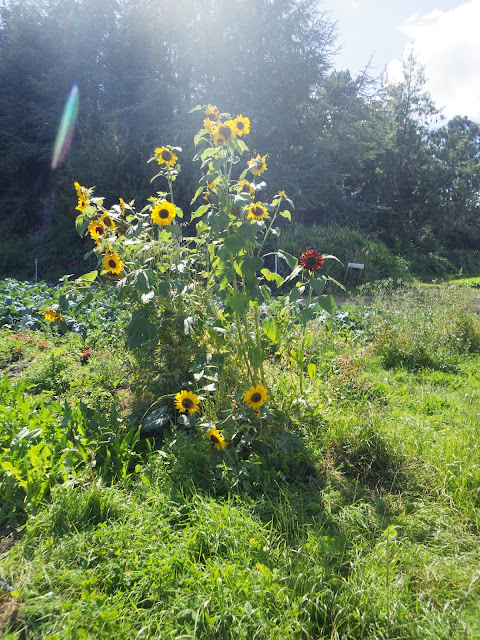 I visited a farm this summer and although it was an organic farm, very tidy and well-managed, it felt lacking. Then I realized there were no sunflowers. A farm in summer without sunflowers is like a farm without a soul. 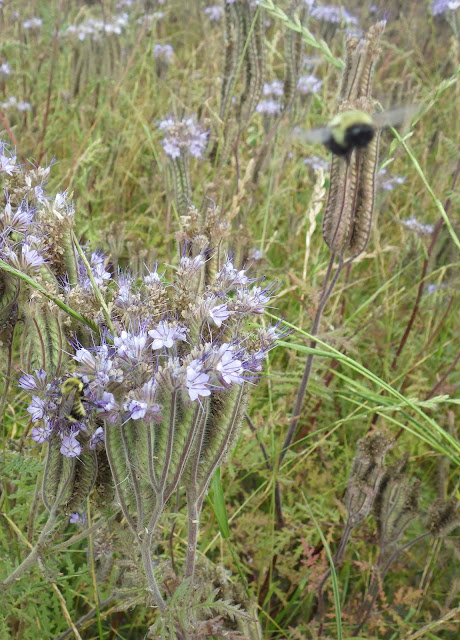 At this time of the year, we are seeing more and more of the eastern bumblebees, escapees from greenhouses. The practise of farming bumblebees is implicated in the loss of many native bumblebees. The bee on the left, however, is one that I can't identify. It looks like the male of the species I found below. 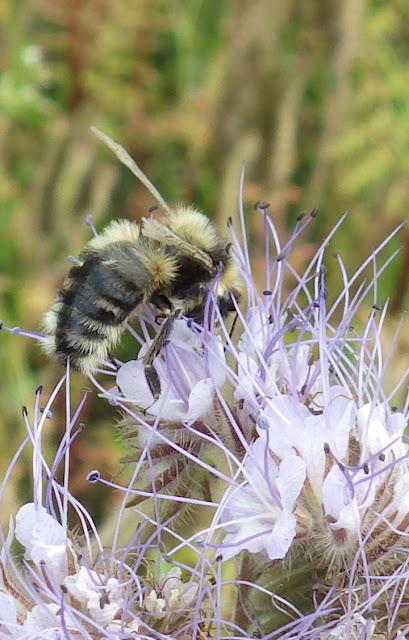 Since the hair is worn off its abdomen, identification is even more difficult than usual, but I will do some detective work. 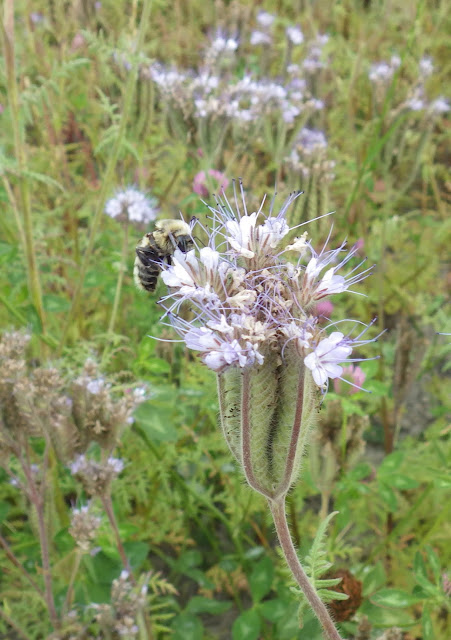 It was quite a large bumblebee--queen-sized in fact. 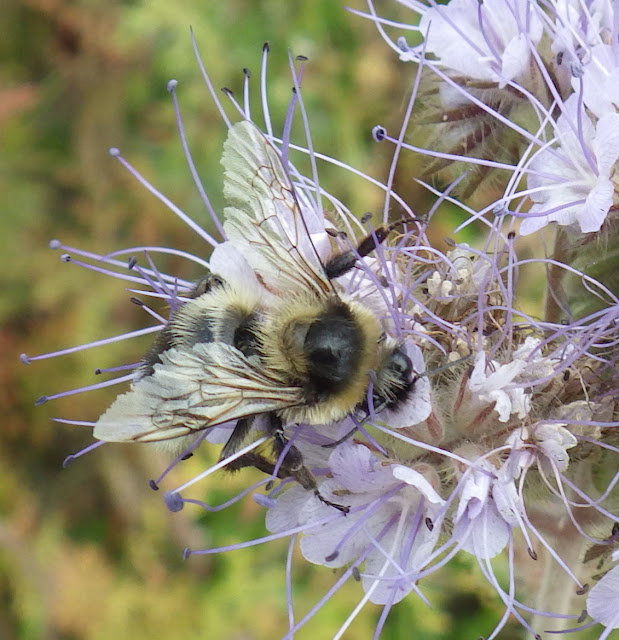 As you can see, its wings are quite worn and it has yellow or buff hairs at the top of its head and a handsome black tache. 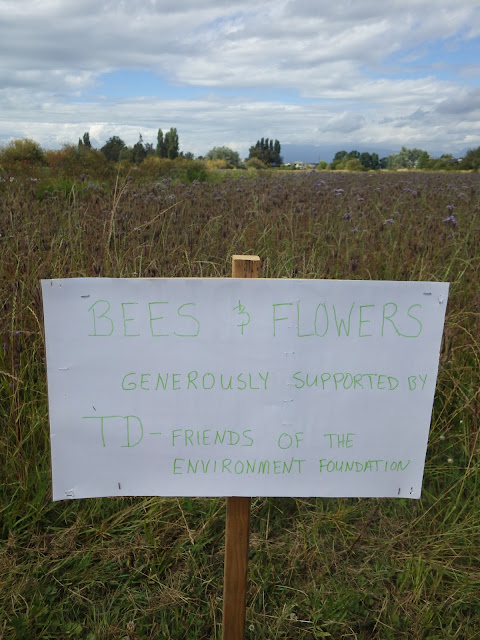 The farm has been a recipient of grants from the TD Friends of the Environment Foundation to grow bee forage on the farm. This field of phacelia bordered by clover and mustard is a direct result of that funding under the leadership of Leslie Williams. 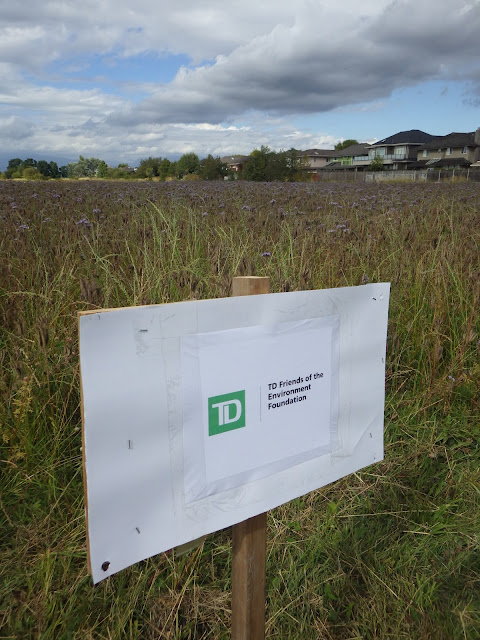 While I wandered around the edges of the meadow, a photographer had his wife wade into the flowers so he could take the classic "beautiful women in flowers" shot. One of the farmers had suggested he mow a U-shaped path in the meadow for folks to wander through. Paths are good, but most of the action happens around the edges of the field anyway. And less paths means more flowers for the bees. 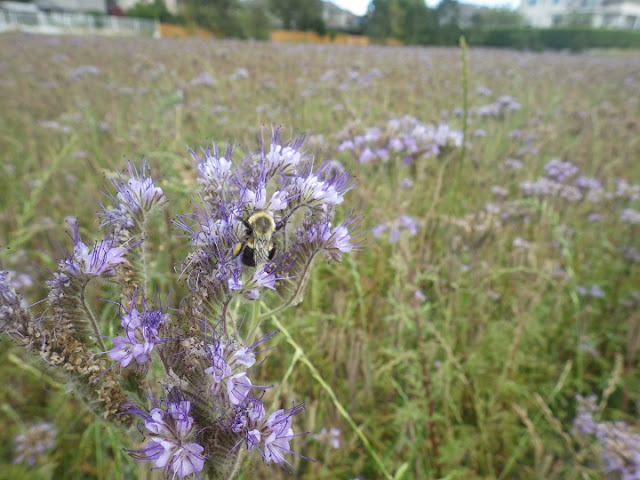 This eastern bumblebee is having a rest after gathering pollen from another plant. The pollen from this phacelia is actually dark purple. 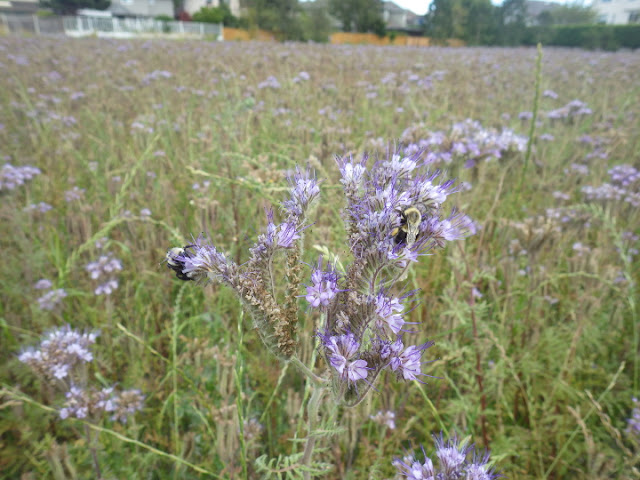 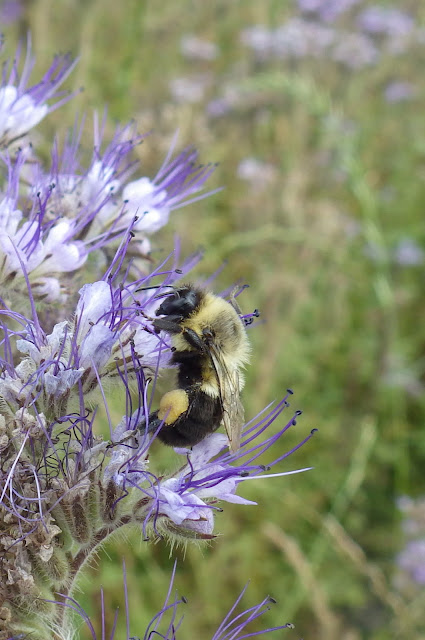 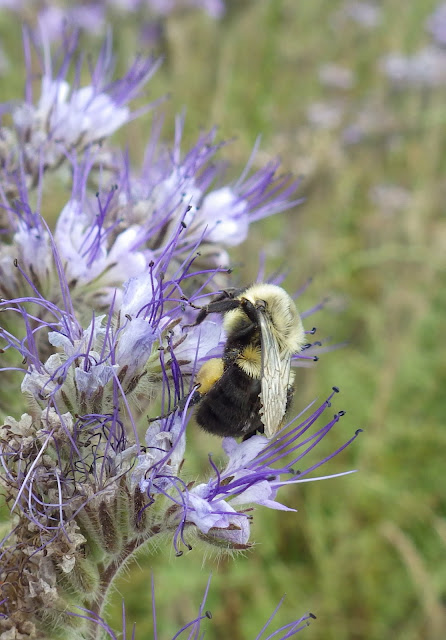 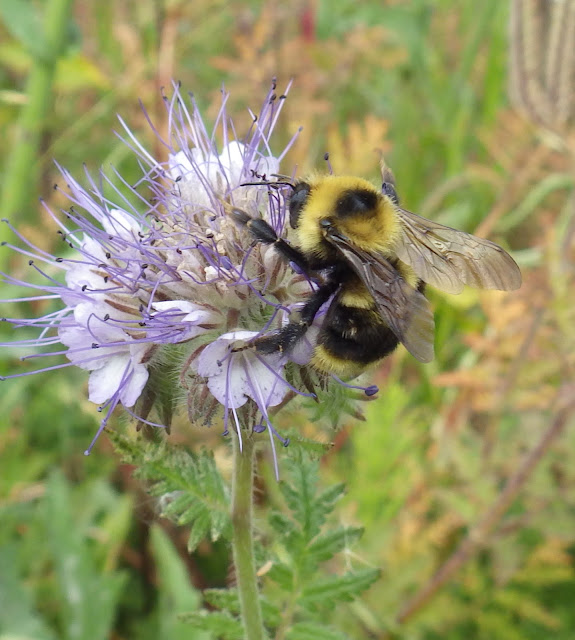 This is what I think is the female of that mystery Bombus above. She is lovely! 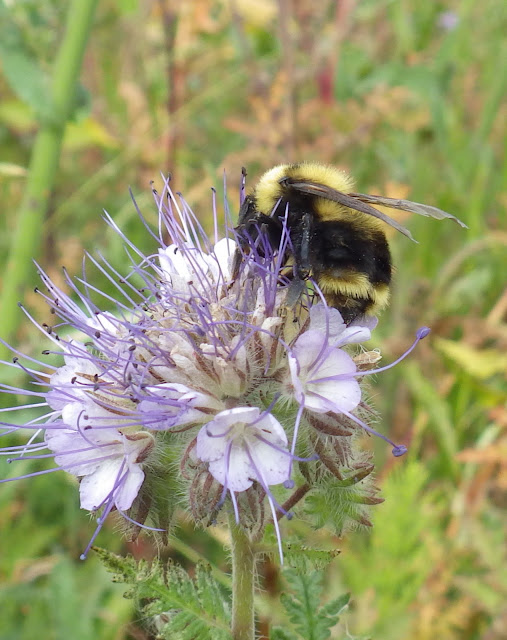 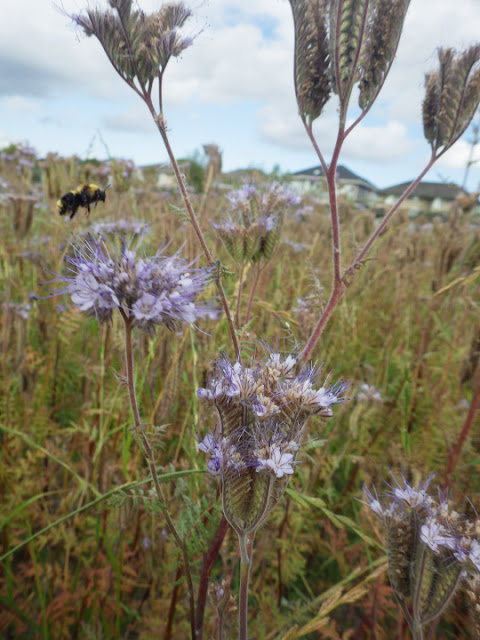 Thanks to Leslie Williams, the instigator of this project, for demonstrating what a beautiful meadow can do for our bees. This is a great model for Richmond because it creates a good habitat synergy in the zones between farming sites and wild habitat. Meadows help feed the farmed pollinators and the wild bees. More meadows please!
Posted by Beespeaker at 8:24 AM