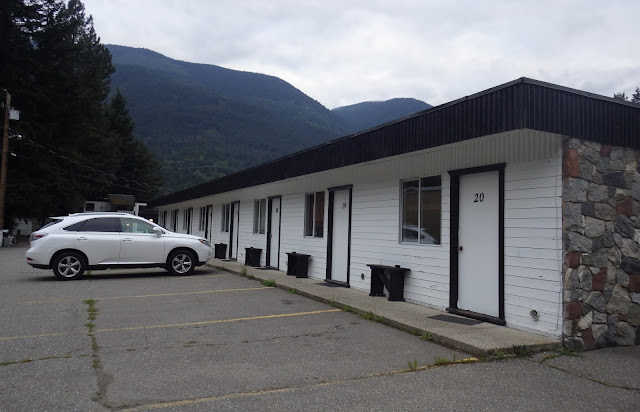 My fellow bee-spotter Jasna Guy and I went on a road trip east of Vancouver to study bees and the flowers that feed them. We had a secret mission, but I'm going to be a bit circumspect about the main goal of our journey. All will be revealed in later posts. 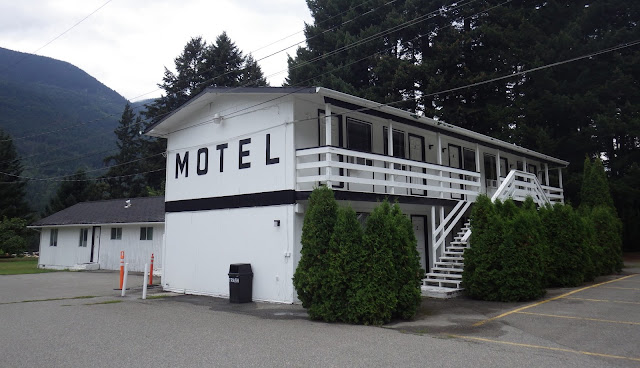 Our first night out we stayed here at the Mighty Fraser Hotel near Boston Bar, BC. 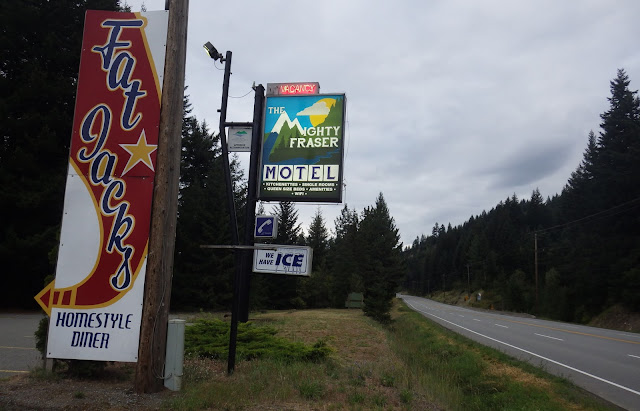 Fat Jack's Diner and Pub is a place with a reputation for good grub on the Gold Rush Trail, the highway that runs past Hell's Gate. The owner and chef used to run an underground restaurant in Vancouver, but chose to leave the big smoke and run this business alongside the mighty Fraser River. 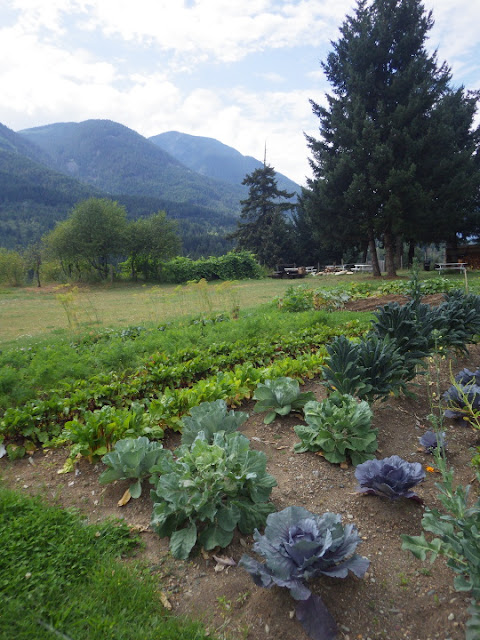 The chef grows food in lovely gardens in the grounds behind the motel. Before we left on our trip I looked up the Motel's Facebook page where the chef said he'd buy lunch for anyone who could pick up his cukes from Neufeld Farms on the way in. That is the best use of Facebook I have ever heard of! 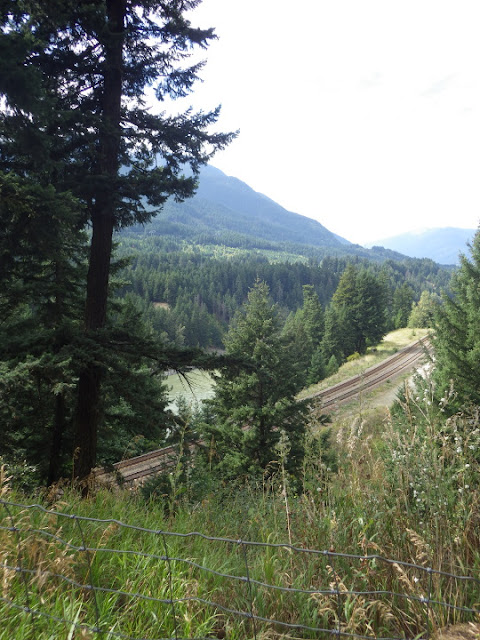 The fence along the property keeps guests from tumbling down the steep drop to the railway tracks alongside the river. 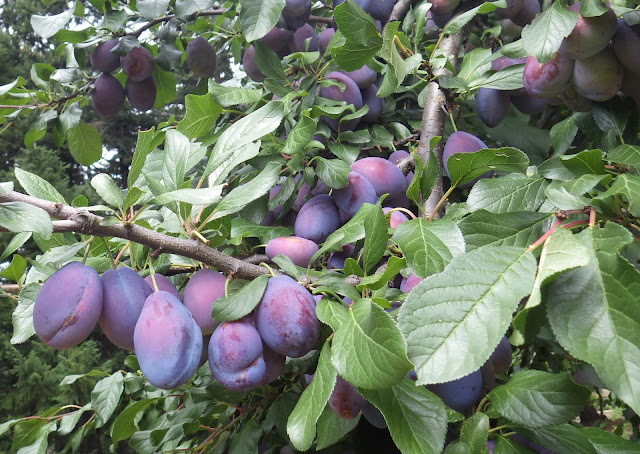 A luscious plum tree laden with ripe fruit is a central feature of the yard. 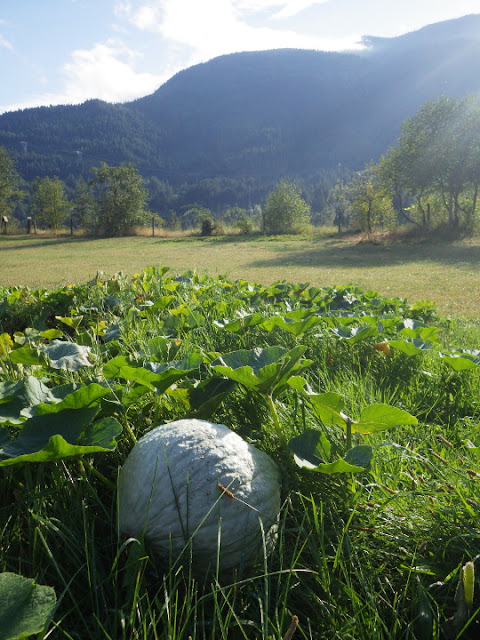 A mighty hubbard squash, twice the size of a soccer ball, greets the dawn. 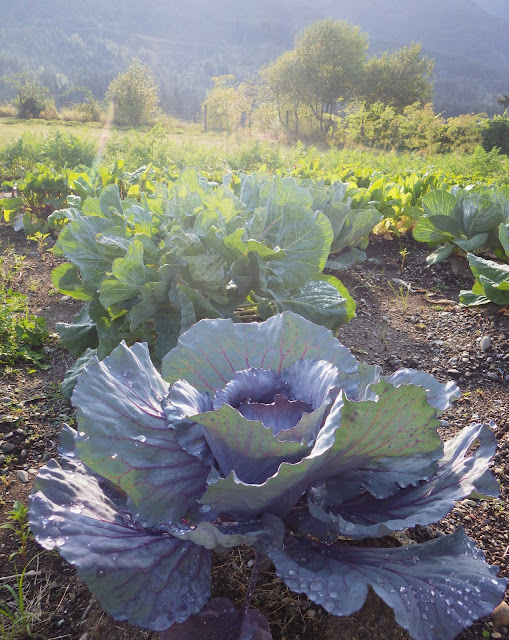 Purple cabbage and purple sprouting broccoli look robust and healthy. We see the chef watering the garden early in the morning, with his black hoodie pulled up like a monk enjoying the quiet solitude of this remote location. 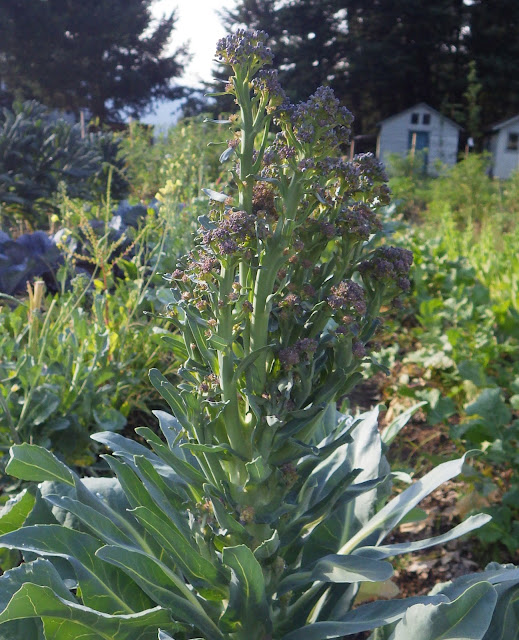 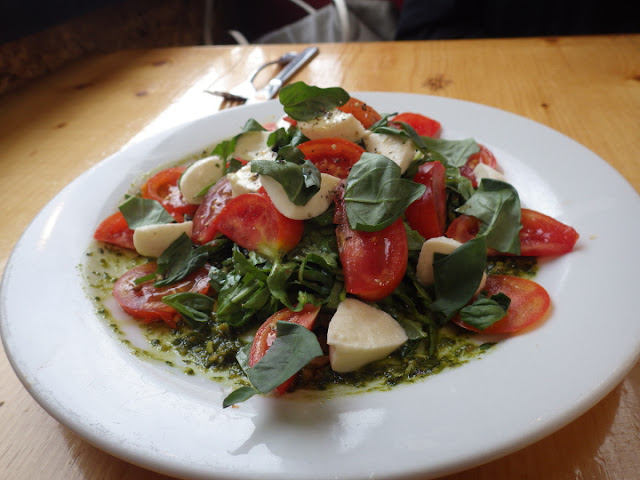 This is one of the daily specials: a lovely caprese salad with ripe tomatoes and fresh basil. 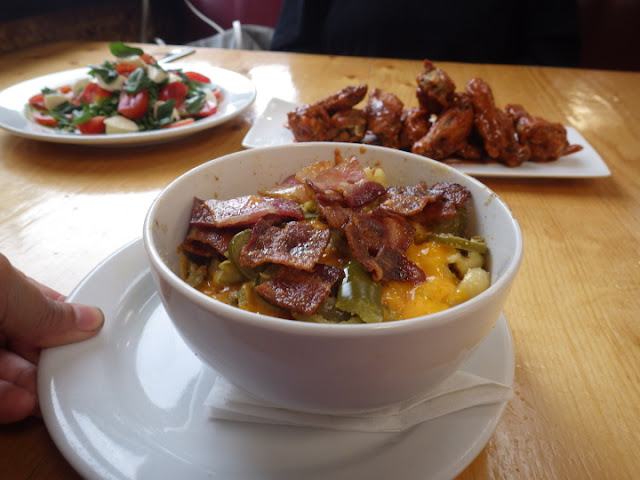 Along with the healthy salad, we go for road trip comfort food: jalapeno bacon mac and cheese and spicy BBQ chicken wings. We also order one of the best caesar salads I have ever eaten. 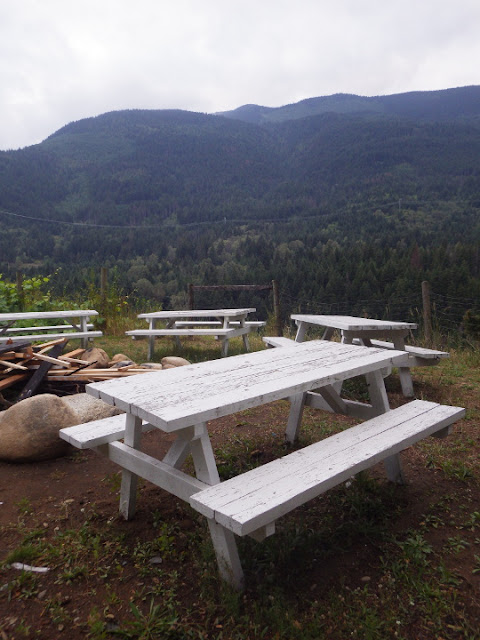 I bet this firepit gets lively on weekends. There's also an art gallery here, and a bowling alley just down the road. We explored nearby Blue Lake on the vertiginous back roads, but it was lousy with sea-doo vermin. 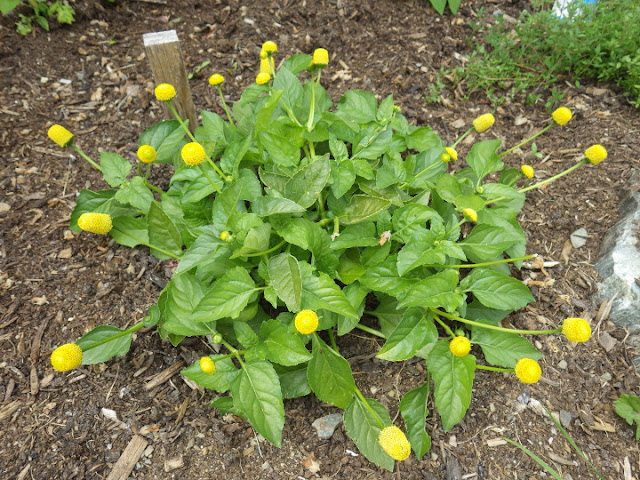 I was impressed to see Spilanthes, which the skippers seemed to be attracted to. I wonder if it gives them a buzz? 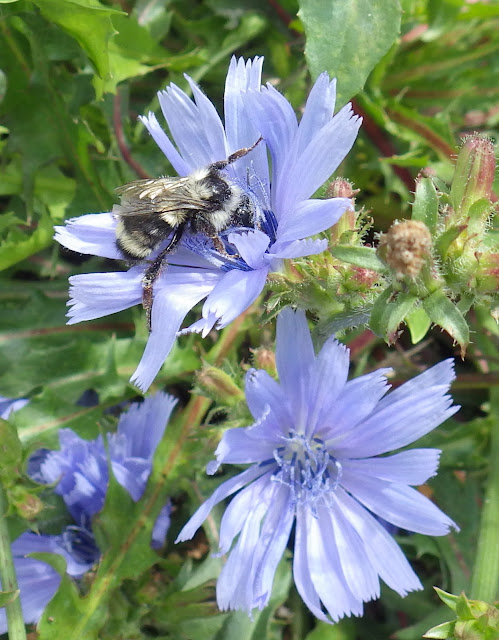 And speaking of buzz, we found Bombus bifarius noshing on roadside chicory. 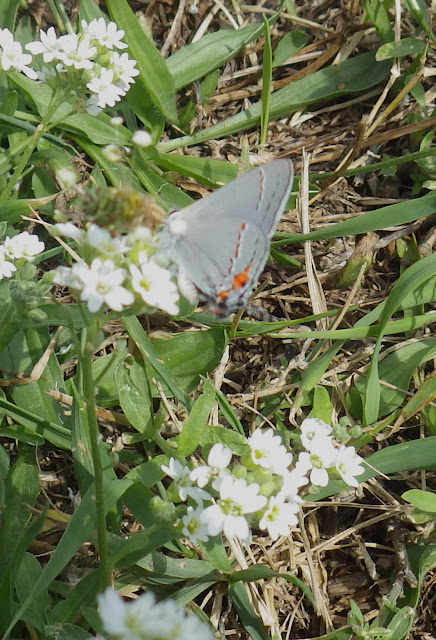 I didn't manage to get a good photo of this hairstreak butterfly, but hopefully bee spotter 2 did. (That's one of the advantages of bug-spotting in pairs!) Jasna IDed this as plant a species of draba flower. 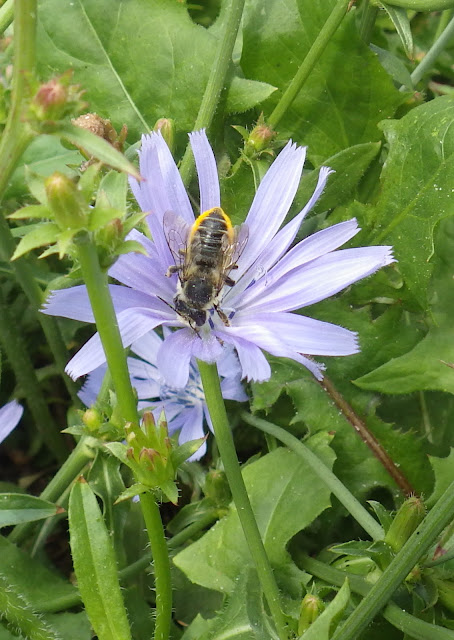 We also saw at least three species of leafcutter bees and a cuckoo leafcutter bee. This species has orange scopae on her abdomen, but the pollen she was collecting from chicory was white. 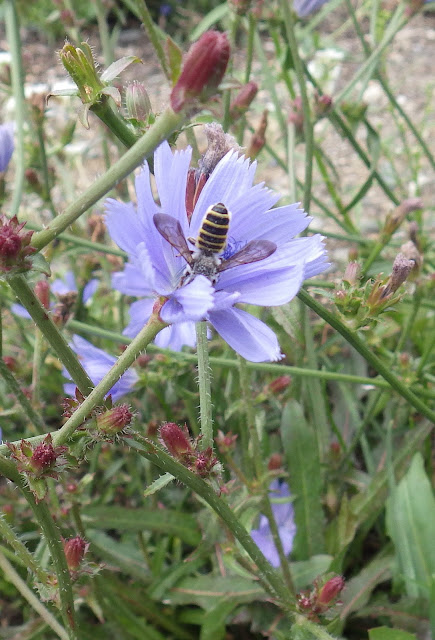 This narrow leafcutter had white hairs on her scopae, but yellow hairs on the bands on top of her abdomen, with quite smokey wing tips. 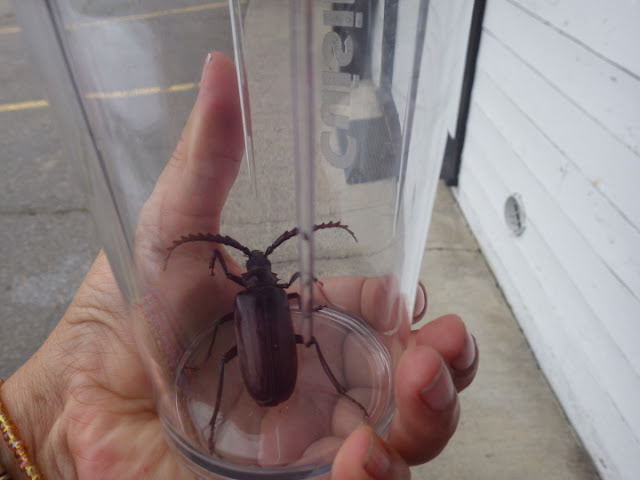 Eat your heart out, Pokemon Go fans. This is Pokebug Go! This beetle, which I think is a California root borer (Prionus californicus), was wandering around the door to the our motel room. It's got antlers like a moose bug. I bet those larvae could do some damage. This beetle is nocturnal, so it's cool that we got to see it. (Caught and released, of course.) Just don't show it to chef, or he'll be making bug burgers with that sucka. 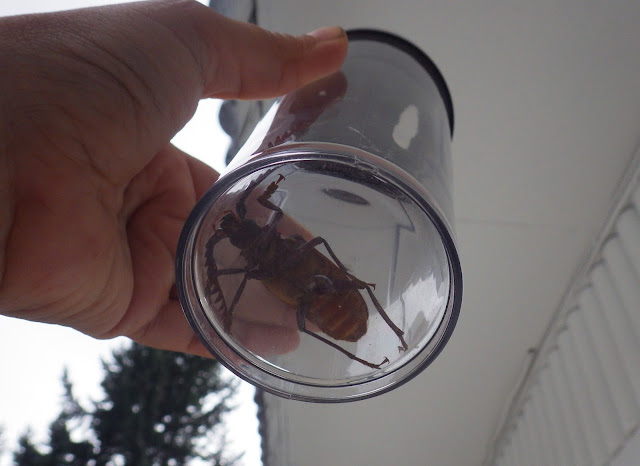 And yes, that is a blender smoothie cup. No, I did not make a smoothie with that bug. It just makes a handy critter catcher. 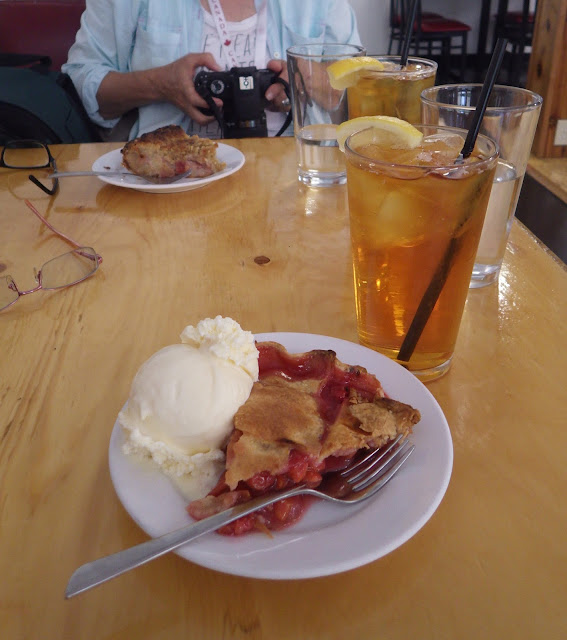 We are also into pie spotting and this sour cherry pie with ice cream was a perfect rendition of one of my faves. The waiter warned me to watch for pits, which was music to my pie-lovin' ears. Serve it with an Amurcan-style unsweetened brewed iced tea and I am in heaven.
Posted by Beespeaker at 6:43 AM