Part 2 of the Calm Beekeeper's Swarm 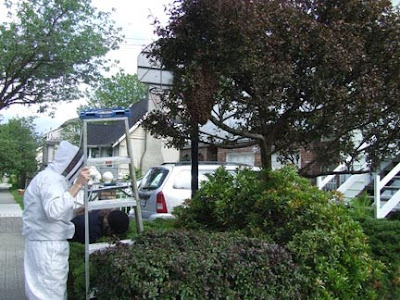 I received a call at about 3:30 pm that Colleen's swarm had relocated. This time they were low enough to capture with the help of our local mentor Cal. You can see from this photo the scale of the swarm--it is a bit smaller than a basket ball net and somewhat diminished from what it was yesterday. They were in the front yard of a neighbor's house, having traveled north. We've usually seen them travel south, so this was a new situation for us. 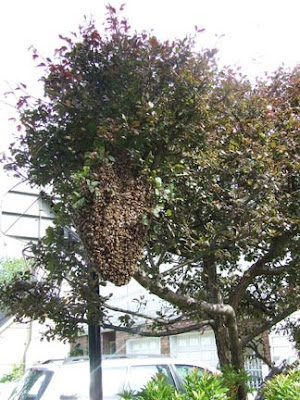 The trick was to clip the small branches first so that the bees would be all together in one large clump that C could rehive. 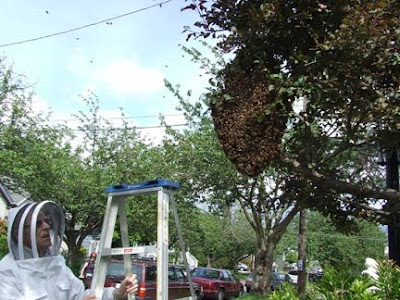 It was awkward getting near the branch because there were hedges all around it. Cal talked C though it all in a soft, gentle voice. You could say he is a beekeeper whisperer and well as a bee whisperer! The trick was using the small handsaw to cut in a backwards motion to gradually cut through the thick branch. 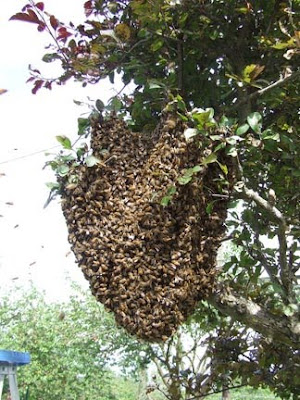 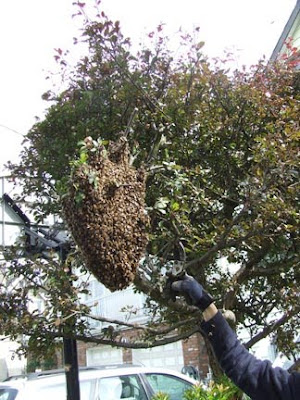 Neighbors stopped to watch and ask questions. An arborist explained to the neighbor that having one final big cut at the end of the branch would be the kindest thing to do to the tree at this point. It's good to have a tree doctor on the scene! You can see that C gave her bee suit to Cal to wear, so she did get a few stings and it seemed that once the bees got the scent of the stings she was a marked woman! Cal doesn't even usually wear gloves, but since this was a bit tricky to get to, the bees did start to get defensive. 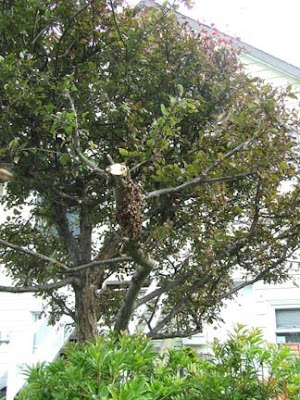 This is the branch after the swarm has been cut down. It took a while for the remaining bees to catch the scent of the new hive. 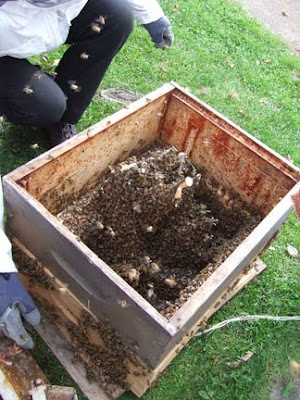 Here's the branch inside two dadant boxes. Once the bees felt secure in the box they started fanning the scent to bring the rest of the bees home. 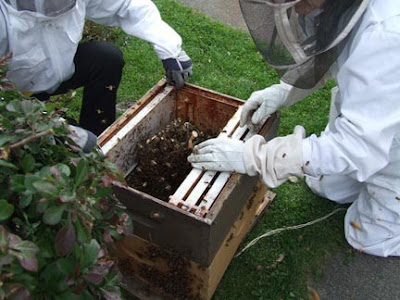 Once Cal and C got the branch into the hive, they put in as many frames as they could and put a cover on the box, leaving a back entrance for the bees to find their way into the hive. It took about two hours to get them to this point and another two to get them all settled in for the night before we moved them into C's back yard. C and Cal did a great job and having the swarm in such a public place was a good educational opportunity for the neighbors. It was a beautiful swarm.
Posted by Beespeaker at 5:48 PM