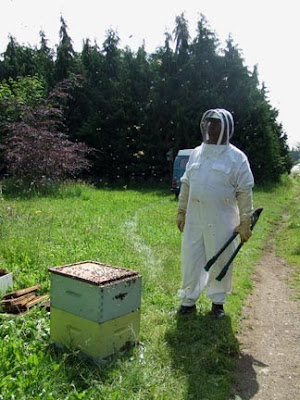 A swarm of bees in June is worth a silver spoon, which is none too shabby. On Saturday I volunteered to give hive tours during the UBC Farm market, which was a real blast. I though I'd be calmly sitting on my butt between tours, but a beekeeper who has a hive on the farm hailed me and asked to help capture a swarm. We grabbed a ladder and some large clippers and because I'd seen our neighbor capture a swarm in a very similar situation I knew exactly what we needed to do and we had it down and in a box in about ten minutes. Would that they were all that easy!!!! The people on the first hive tour were given the unique opportunity to see the bees settling themselves into their new home. Then B loaded up as observation hive with a frame and everyone in the subsequent tours got a close up look at the bees without fear of being stung. 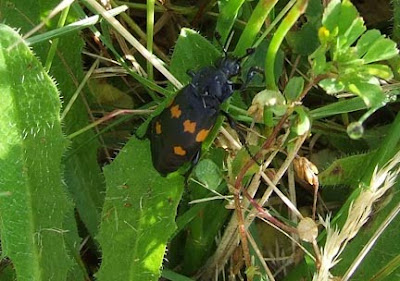 I found this guy wandering in the grass close to the chickens. Just the kind of bug they'd love to chomp down, although the red and black coloration probably warns them it wouldn't taste too good. Sunshine and loveliness. Curious toddlers with their noses pressed up to the glass in the visible hive, and the sound of roosters asserting their masculinity in the background. Eagles circling, blessing the circles of conversation. The familiar fresh odors of forest and earth overlaid with the aromas of warm bannock and coffee. I am so filled to the brim with love for UBC Farm. The students change from year to year, but the spirit remains hopeful and restorative.
Posted by Beespeaker at 12:22 PM