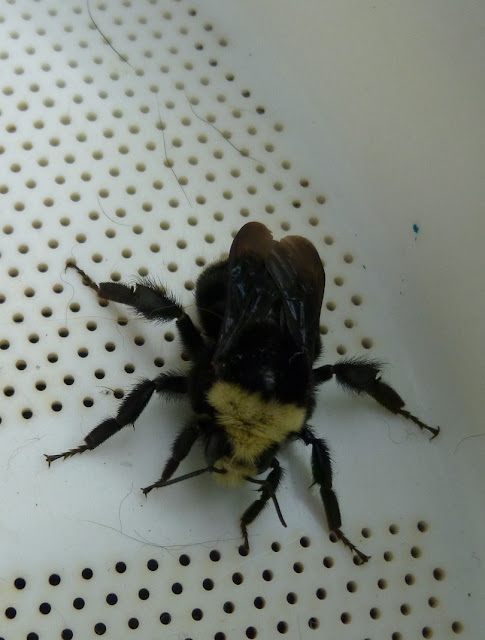 Imagine my surprise, dear reader, when I opened up my washing machine in the basement to discover a rather large queen bee resting in the lint trap. I immediately took her outside to the south side of the house where it was warmest. The trouble is, it wasn't warm at all. The poor bumble bee queen had to suffer the indignity of waiting it out in the lint trap. 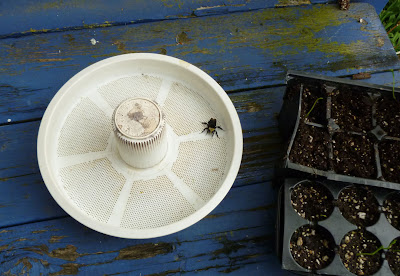 I was relieved when at about afternoon tea time, the sun made a blessed appearance. I went out to run errands and when I cam back she had flown away, joining her sister Bombus Terrestris queens in foraging through the forsythia blossoms.

In other news, I have a new celebrity crush. I am so excited to have discovered by chance the show "How to Grow Your Own Drugs" with James Wong, a handsome(!) ethnobotanist who trained at Kew Gardens. (Lucky sod!) Having grown up in Malaysian he adds a Asian flair to some of his medicinal culinary creations. Wong is very charismatic and he makes his concoctions look accessible by going through them step by step and using ingredients that are close at hand--ie growing in your garden! He does things I've always wanted to try, but couldn't get up the nerve to deal with the mess and inevitable rate of failure. He's inspired me to take my kitchen experiments to the next level. Enter goji berries, stage right . . . .

--a riff on a recipe by James Wong

Ingredients: (Use the amounts suited to your taste and the amount of servings you're making)

We have roast chicken about once a week, so it's a weekly ritual to make chicken stock from scratch. This week I was inspired by ethnobotanist James Wong's recipe for goji berry x chicken soup. I am so excited because I just bought a little goji berry plant aka "wolf berry" (Lycium barbarum) to put in our garden. Apparently they grow really well in Vancouver. Wong says you can even grow them in planter boxes in a sunny spot on your balcony. Now apparently these plants are related to the deadly nightshade family, the plants of which are pollinated by (ta da!) bumble bees.

I had some nettles in the fridge and I used a fresh leek from our garden to add some more super-powered health benefits to this super-soup. After making the chicken stock you can soak the goji berries in water while cooking the wild rice in the stock. I sauteed the garlic and leeks in olive oil and salt, adding in the shitake mushrooms. Once the wild rice is cooked (about 40 minutes) you can add in the miso, dissolving it in the stock and then all the rest of the ingredients (including the water the goji berries have been soaking in).

All you need to do is simmer the soup until the nettles have wilted. Of course it always tastes better after a day in the fridge when the flavours have melded. This soup is very healing and grounding. You can add chile pepper if you have a cold and need to turn the wolf into a dragon!