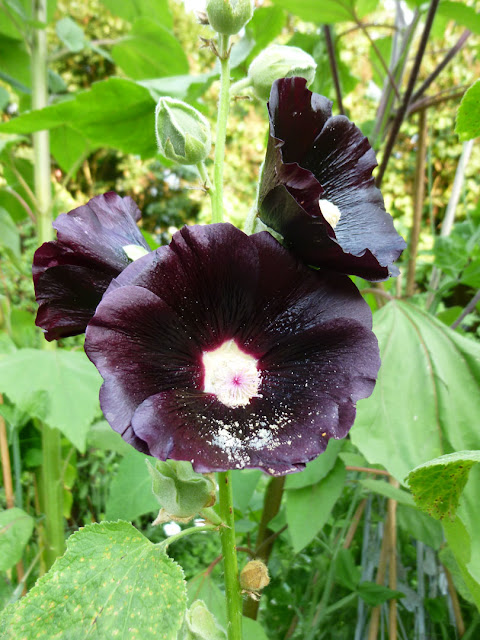 Every time I teach a workshop, I delve a little deeper and wider into the topic. I am talking about edible flowers on Thursday, and so I am mentally going through my garden to see what I could be eating. I knew that the petals of hollyhocks were edible, but was surprised to read that in some cultures the leaves are eaten as well.

In a blog about the flowers, trees and herbs of Jerusalem, Josephine Levin gives two recipes for using the leaves as well as how to eat the immature seeds of mallow plants.


"During the 1948 war for Independence when Jerusalem was under siege, many people saved themselves from starvation by eating wild mallow and hollyhock leaves, roots, seeds etc. In fact the Arabic words hubes for hollyhocks hubesa for mallows mean bread."
In the blog Hunter, Angler, Gardener, Cook, Hank Shaw forages for mallow and makes his take on dolmades.

The Nerdy Farm Wife (great name, BTW) outlines five uses for Hollyhocks, including using them in a pretty soap.
And now I can refer you to a post I made earlier on the Malvaceae flowers in my garden.
Posted by Beespeaker at 9:34 AM