Skippers and a New Insect Hotel 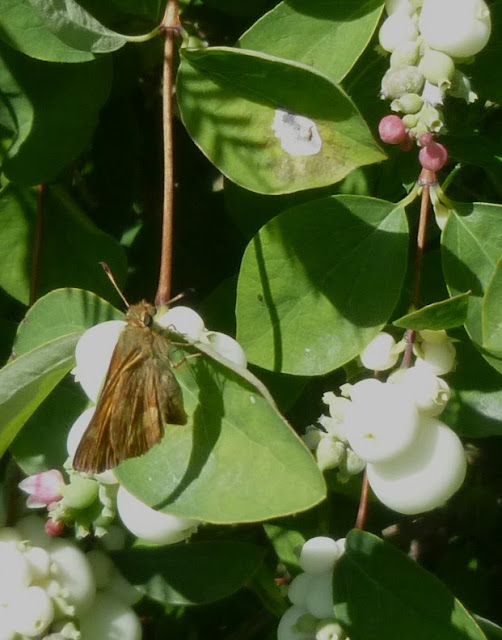 I have been noticing a lot of skippers lately all around the city. They are so plucky and playful. I like their attitude. This is a skipper in the snowberry (still blooming!!!) at the Moberly Cultural Herb Garden. (Have you got your red dress for the party this Sunday????) 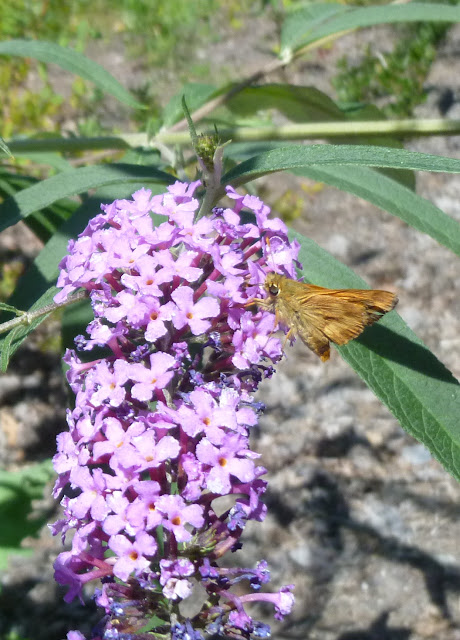 This is a small buddleia at the Oak Meadows park. It is a shame that most buddleia are invasive* here in Vancouver because they are great bee, butterfly and hummingbird plants. In fact, after I took this picture, I stood up and startled a hummingbird feeding from this plant. This afternoon I spent a good ten minutes watching an Anna's female feed in my neighbor's towering 18 ft buddleia. The bees were all over it as well. The Anna's even fought with a smaller hummer (perhaps a female rufous) to defend "her" bush. There was no squeaking, just the clacking of beaks like tiny swords. About a half and hour later there was a flock of bush tits in the buddleia, feeding on bugs. It was funny to see them land on a branch and sproing up and down on it. 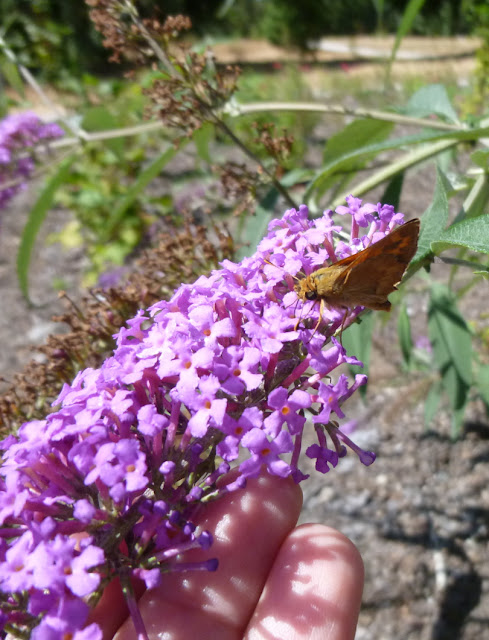 You can see her tongue go into the orange center of the floret. 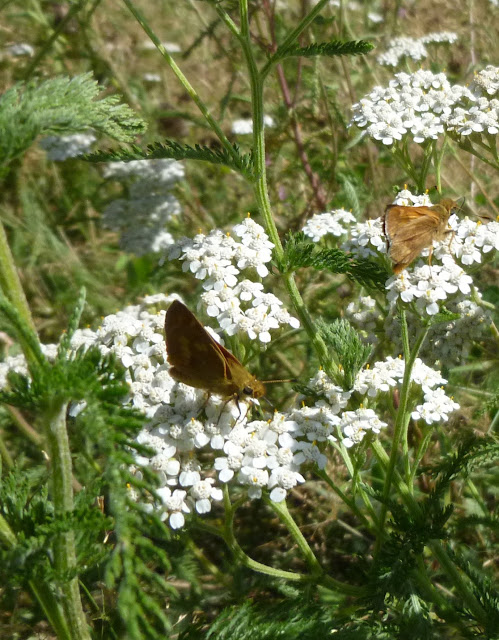 Erin Udal from the Environmental Youth Alliance says the yarrow in Oak Meadows Park has bee supporting the bees since the lupins finished. We discussed how plants like yarrow can be empty in some gardens and teeming with insects in others. There are a variety of wasps out now and bees that look like wasps, so it all gets very confusing. But this wasp is acting like a bee. 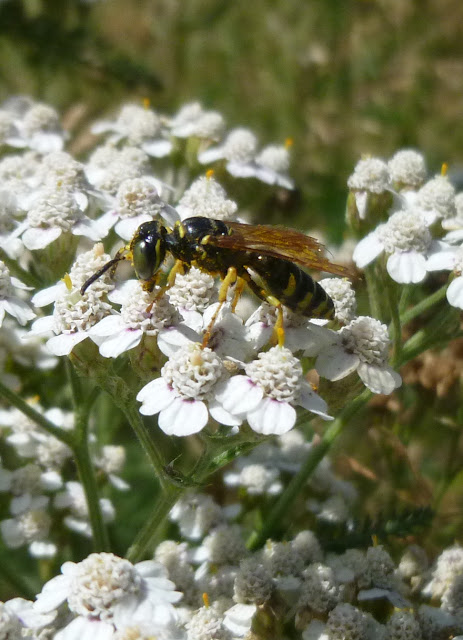 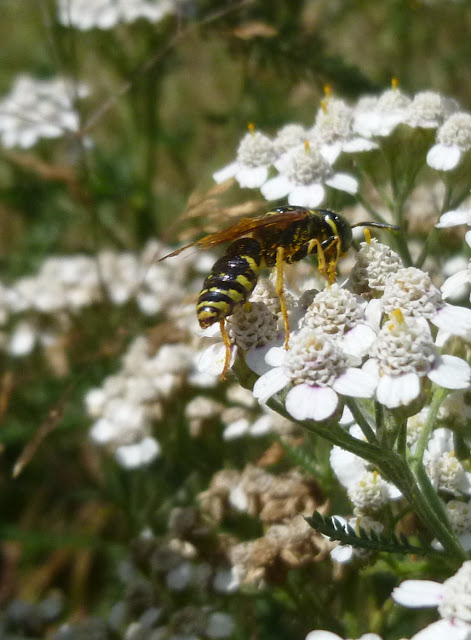 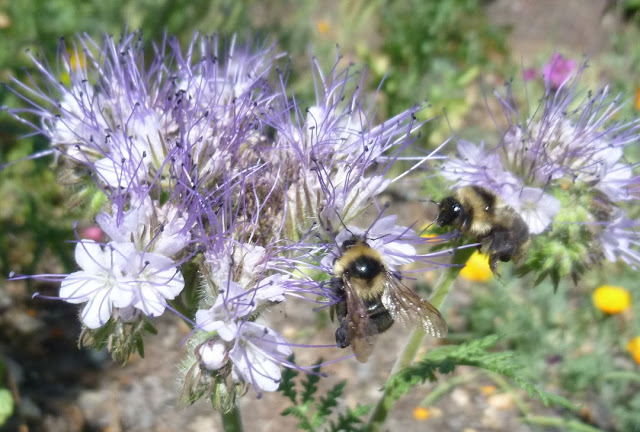 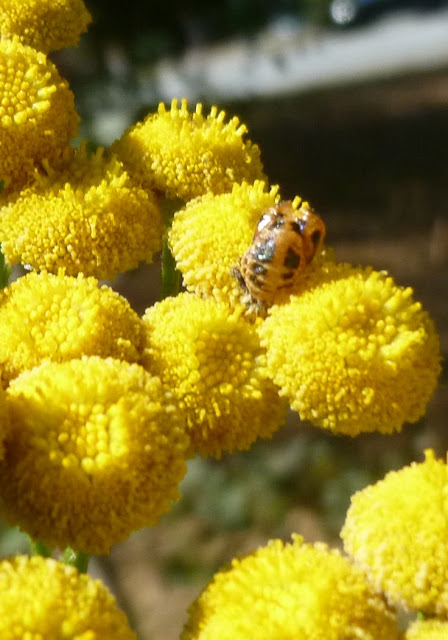 This is an empty ladybug pupae case on tansy, which is an escaped old world herb. The honey bees and bumble bees were visiting this plant as well. 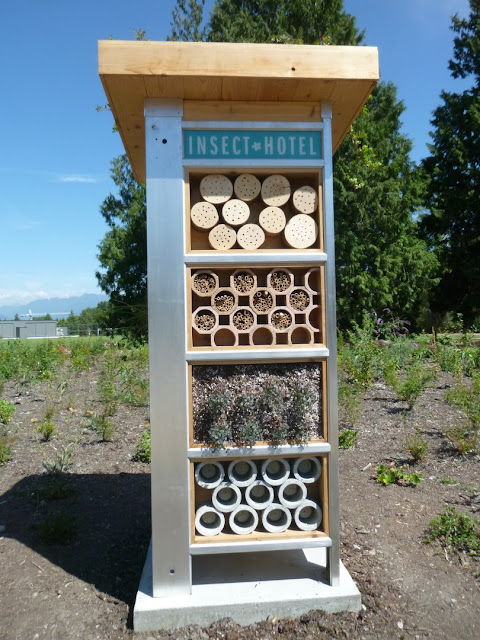 Check out this fabulous new insect hotel made from a decommissioned phone booth by Contexture Design!

*You must cut off the seed heads of the buddleia before they mature. Plant breeders are developing less fertile cultivars, but the pollen and nectar rewards may not be the same as the weedy ones. We have one that grows out of a crack in the sidewalk in front of our house.
Posted by Beespeaker at 11:30 PM